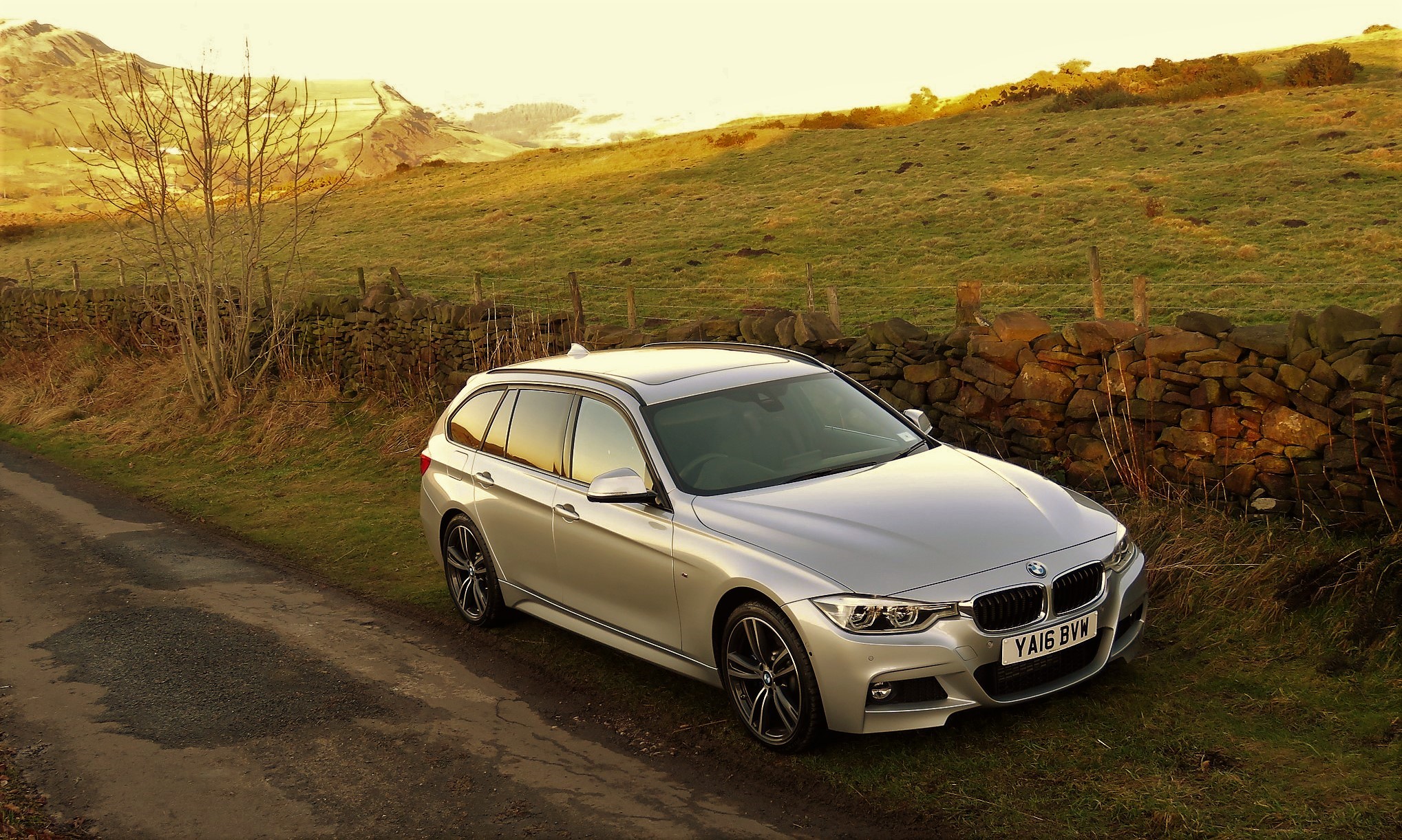 THE BMW 330d Touring xDrive M Sport is one of the sportiest estates you can get these days – unless you go for the 335d, which may be a little overkill.

After all, 258bhp and 560Nm of torque should be enough to get you anywhere you want to go pretty quickly and with all-wheel-drive it doesn’t matter too much if the weather isn’t playing ball.

Yes, the 190bhp 320d is still quick but there is something about the smoothness and rasp of BMW’s six-pot diesel that makes it worth spending the extra.

The xDrive system adds about 65kg over the rear-wheel drive versions and, okay, you can feel that extra weight a little when you throw the car about – but given the huge amounts of extra grip available and the confidence this instils then I would say the extra lardiness is justified. That extra grip also equates to a 0-60mph time of just 5.4 seconds – 2 tenths of a second quicker than the RWD version. The M Sport specification car I’ve been driving is a bit of a looker too and although the lowered M Sport springs aren’t available on the xDrive model the car still looks hunkered down on 18in light alloy wheels.

The lines are typical BMW, subtle and familiar – maybe too familiar. There’s no denying though that this icon of German engineering still attracts admiring glances even though the basic shape has hardly changed in well over a decade but the touring version – for me – lacks some of the visual appeal of the saloon as I prefer a sportier look and by necessity the touring is less so. But at least BMW give you the choice.

Inside is familiar ground  – and again it’s no bad thing. The materials used are top notch and if there is a better driving position to be had in any sports tourer then I have yet to find it. Everything falls to hand easily and although the auto gear lever and iDrive control knob look and work superbly well, I can’t help but think the 6.5in infotainment screen looks like an afterthought stuck to the dash top. Driver and front passenger are catered for very well when it comes to comfort and space with heated, full leather sports seats, a M Sport, multi-function steering wheel and dual-zone climate control.

Rear passengers are a little shorter on space but still cosseted in leather with perhaps only the central passenger having cause for complaint as they lose a little leg and foot room to the transmission tunnel and rear vent housing. Still, quite a good amount of room for two adults and even six-footers should be able to travel in comfort. But, as with any BMW, the focus will be always be on how it drives and here the 330d xDrive Touring M Sport doesn’t disappoint as I found myself taking every opportunity to just “pop out for a quick drive”.

First off I have to say that the engine is an absolute cracker. Not the quietest at tick-over but who cares for once on the go it quietens down considerably and the 6-cylinder TwinPower turbo unit pulls very strongly throughout the rev range. Mated to the 8-speed automatic transmission you find the car effortlessly heading for the horizon very quickly and very smoothly indeed. Even in normal, everyday mode this car is very quick but slip it into Sport mode and the power steering becomes noticeably heavier – even at lower speeds – and feedback through the wheel is enhanced – which is a good thing as in normal mode it feels a little wooly and vague which is something I found very surprising. There is also a Sport+ mode which will switch off most of the driver aids if you are feeling particularly brave but to be honest, unless you are on a track I can’t see why you would use this as Sport mode is more “sport” than most people would ever need on public roads.

Then there is the road-holding – which is magnificent, bordering on the magical – as the 4-wheel drive system takes your clumsy driving inputs and turns you into a smooth operator. Normally, the system will provide around 60% of the power to the rear wheels and 40% to the front, but out on the twisty A-roads where grip can be less than consistent the xDrive system, coupled with Dynamic Stability Control, ensures unwavering stability and traction that can become quite addictive as you marvel at just how quickly you can get around corners without so much as a twitch from the chassis.

The ride isn’t bone-shaking either. In fact it’s very comfortable, even in Sport mode where the occasional pot-hole or ridge may cause a slight thump from the suspension but I never once had my fillings rattled – even when trapping on a bit. Downsides? Not much really apart from that slight wooliness in the steering – perhaps the knowledge that you can have the rear-wheel drive version for £1,515 less and still have a very quick and excellent-handling sporting tourer could have you waivering at the dealership but I think the extra money is worth the safety and confidence gained – especially in dire conditions such as water-logged motorways or snow and ice.

£41,335 is a lot of money to pay for a family-sized AWD estate – especially when you think about the plethora of mid-sized, family-friendly SUVs that are available from the likes of Kia, Hyundai, Nissan and Renault who all provide the option of AWD.

However, BMW aren’t really competing against SUVs with the 3-Series Tourer (although you can pick up the 320i SE xDrive for just £30,715) rather, they appeal to the keen driver by providing cars that are not only aspirational but are engaging and thrilling to drive while, through BMW Efficient Dynamics, still provide lower fuel consumption and less emissions – the 320d Touring xDrive, for instance, has CO2 emissions of just 118g/km which is very good for a 4WD tourer capable of 0-60mph in just 7.6 seconds.

The BMW 330d xDrive Touring in M Sport trim is definitely a good-looking and capable estate which anyone would be happy to have sat on their driveway – you may struggle to cut your fuel bill though as you’ll find any excuse to take it out for a drive.