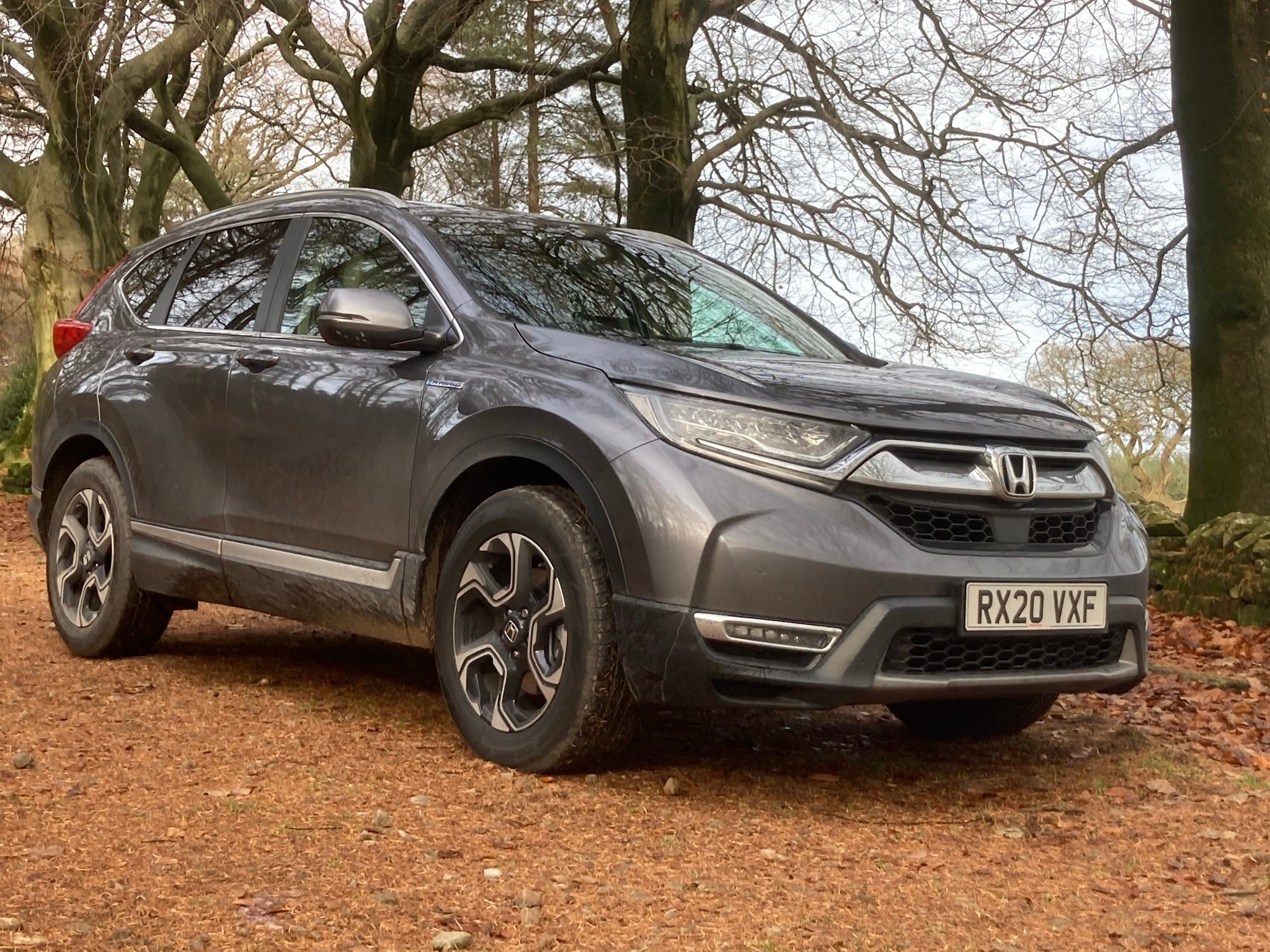 And, as someone whose 50th birthday celebrations are in the dim-and-distant past, I have no problem with that at all.

I even find the faux-wood interior trim inoffensive and the general look, inside and out, to be reassuringly stoic rather than unreservedly heroic.

The Honda CR-V does appear to attract a “sort” though. The sort of person who recognizes reliability and quality and who will stick with the brand through thick and thin. You very rarely hear a Honda driver complaining about any aspect of their car.

But Honda, of course, realize that brand-loyalty alone does not cut it in this world of tech-savvy drivers, and so strives to remain innovative and relevant to all demographics – Just take a look at the Civic Type-R or NSX hybrid, for instance.

This 5th-generation Honda CR-V certainly isn’t resting on any laurels, and while not physically striking, it has enough character to be instantly recognisable among the ocean of mid-sized SUVs that populate our roads these days.

“Compact Recreational Vehicle” or “Comfortable Runabout Vehicle” are both interpretations of the acronym “CR-V”. Neither explain the hyphen though . . .

While the name may be a mystery, the reason why the CR-V Hybrid is such a best-seller for Honda isn’t. It’s a perfect size SUV for family use and is larger and more practical than the soon-to-be-revamped HR-V (Happy Recreational Vehicle?)

The latest updates mean there is no longer a diesel model in the line-up. A petrol/electric Hybrid is the only choice – but fear not, it adds to the CR-Vs driving enjoyment immensely.

The Honda CR-V Hybrid utilises Honda’s intelligent Multi-Mode Drive (I-MMD) which uses a 2.0-litre petrol engine alongside two electric motors – one for propulsion and one for generating power to deliver to the propulsion motor. All clever stuff which means there’s no need to plug-in your Honda CR-V, like some hybrids.

The system determines how to use fuel and electrical energy in the most efficient way, meaning there’s no requirement for the driver to adjust between the three driving modes; Electric Drive, Hybrid Drive and Engine Drive.

In Electric Drive, the propulsion motor draws its power solely from the batteries, delivering super-quiet and low-emissions driving. In Hybrid Drive, the petrol engine supplies power to the electric generator motor, which in turn delivers power to the electric propulsion motor, so that any excess power from the petrol engine is diverted back through the generator motor to recharge the batteries.

In Engine Drive, the wheels are driven by the petrol engine, with an “on-demand’ peak-power boost” available from the electric motor when you need to make a quick overtaking manoeuvre.

The Honda CR-V Hybrid is available in either 2- or 4-wheel drive with prices starting at £31,460 for the 2WD-only S model.

The SE, SR and EX models are all available with 4WD, while the Sport Line model is only available in 2WD.

Equipment levels are very good with even the SE model getting dual-zone climate, LED head and tail lights, an Economy mode as well as an EV mode and Honda’s Connect infotainment system with Garmin navigation.

The interior of the Honda CR-V Hybrid EX is plush enough to impress anyone who has sat in a Toyota RAV4, Peugeot 5008 or Ford Kuga recently. It’s certainly well screwed together and there are soft-touch materials aplenty.

My EX model came with Ivory leather upholstery that really brightens up the cabin. Along with the wood trim it looks smart enough, but my own choice would be to drop the wood in place of a metallic trim.

The digital dash looks bright and sharp with configurable items including a charge bar and two “fuel” indicators – one for the petrol tank and one for the battery charge-state.

The infotainment system is a little disappointing as the 7in display is framed in acres of blank, black screen that makes the actual display look a bit weedy.

It’s not the quickest-responding screen either and the graphics are beginning to look dated next to some rival’s offerings.

However, there is a separate volume dial within easy reach so you don’t need to take your eyes from the road when adjusting sound levels.

Garmin Connect sat nav, alongside Apple CarPlay and Android Auto is standard on SE and above which improves the built-in system no end and is well-worth having.

There’s certainly plenty of space in the CR-V and that goes for the rear too, although you won’t find a third-row of seats anymore due to the batteries. Cabin space is otherwise unaffected with plenty of head and leg room in the back and the boot only being slightly down on size at 497 litres.

Three adults in the rear are fine, with only a slight hump in the floor for the middle-passenger to contend with. Kids will have bags of space and the ISOFIX anchor points are easy to get to for securing child seats.

Driving the Honda CR-V Hybrid is simplicity itself as there is no gearstick to contend with. just a simple set of push buttons on the centre console. Hit the big ‘D’ for going forward, pull down the big ‘R’ for going backwards or hit ‘P’ for going nowhere.

To the left are the ‘Sport’ button (for going faster) and the ‘Econ’ and ‘EV’ buttons for saving some juice and using ONLY electric juice, respectively.

Silently pulling away, the CR-V immediately feels calming and refined. It only takes a handful of miles to make you realize the Honda CR-V is set up for comfort rather than speed with road-imperfections eaten up without fuss.

If you decide to trap on a bit then things get slightly choppier, but not much. The CR-V really is a comfortable cruiser and extraneous noise is impressively subdued.

With the absence of any gear-change or de-clutching, progress in the Honda CR-V is very serene and you’ll soon wonder why you’ve spent so much time driving a non-hybrid.

I doubt you’ll ever see a CR-V being driven like it’s been stolen – CR-V drivers have a different set of priorities when it comes to motoring. That’s not to say the car is boring to drive – it’s simply not. It has some grunt, grips well (especially in AWD guise) and handles better than expected for a mid-sized SUV that has its passenger’s comfort top of its list.

The Honda CR-V is a solid, dependable SUV that doesn’t excite but delivers on so many other levels. Driven sensibly (and it most certainly will be) you can easily reach the mid-40s in mixed driving – probably even more with the 2WD version. It’s a pity the CO2 figure is disappointing.

However, the CR-V delivers decent economy for a car that provides quiet, refined comfort for all the family. Once driven, I doubt you’d ever go back to a clattery oil-burner again.