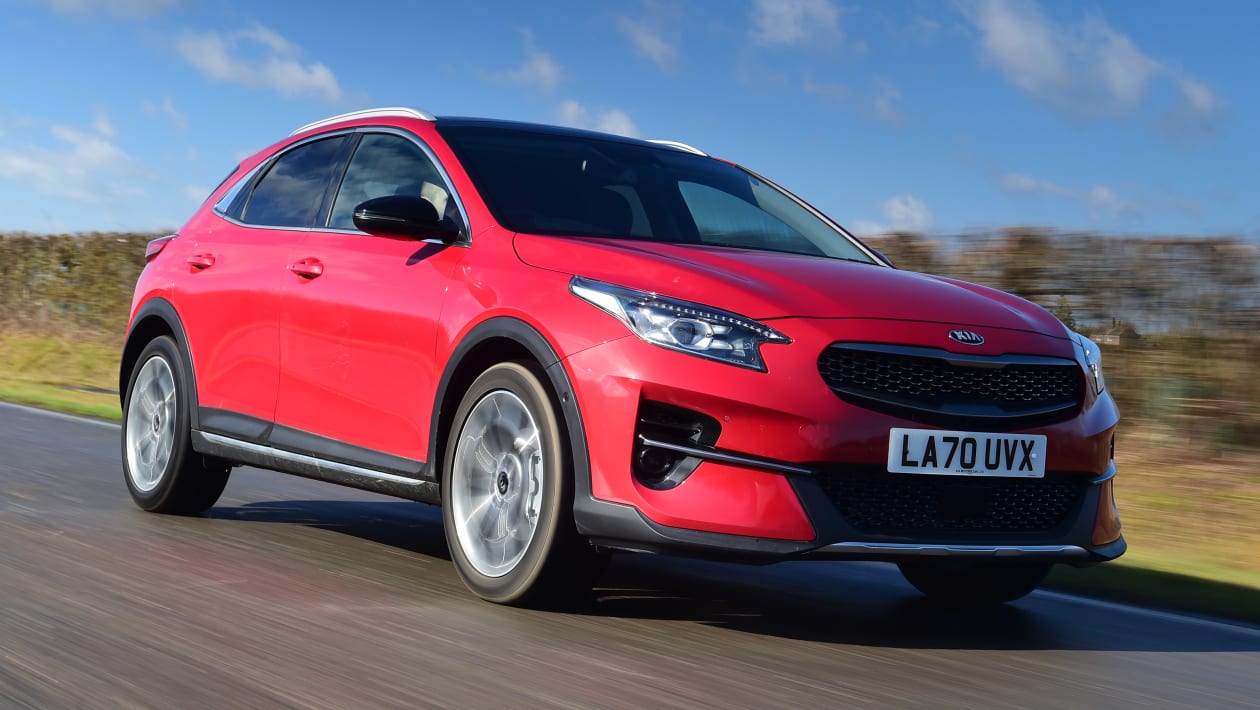 MY first thoughts when the new Kia Xceed T-GDi ‘4’ arrived at my house were (a) It’s bigger than I thought, and (b) It’s really rather “classy” looking.

More than one person compared it to the new Mercedes GLA during the week I had it, and although I personally think that’s a bit of a push, I kind of see where they’re coming from . . .

The XCeed does look classier than the ordinary Ceed hatchback that it’s based upon thanks to the raised, SUV/Crossover look and all the trimmings, such as roof rails, rugged side sills, deeper front grille with larger lower intake and the rear trailing edge “deck” that sits 60mm higher than on the conventional Ceed.

Although based on the Ceed platform the XCeed is longer and wider by some way. The deep creases running along the rear hatch and bumper add to the bullish, planted way the XCeed sits and there is a sense of overall solidity – much more so than in the Ford Focus Active, which is probably the XCeed’s main rival.

My car was also equipped with the new 1.5 T-GDi petrol unit which pumps out a healthy 158bhp which is a full 40bhp more than the alternative 1.0 litre unit and proved to be very capable indeed with a decent turn of speed.

The new 1.5 T-GDi is available on ‘3’ and ‘4’ models and can be optioned with a DCT automatic gearbox if you wish.

My ‘4’ model came with a 6-speed manual gearbox which felt smooth enough and enabled me to get the best from the more powerful petrol unit which benefits from keeping up the revs between gearchanges.

It really does feel quite punchy at anything above 1,500 rpm and I was pleasantly surprised at how well it responds to being worked hard. It sounded a little harsh in 1st and 2nd gear when setting off at a decent pace, but once up to normal speeds it settled down and felt refined even at motorway speeds.

Ride quality is very good indeed with the suspension set-up unique to the XCeed and tested exhaustively on UK roads.

Uniquely in the Ceed model line-up, the Kia XCeed features hydraulic rebound stoppers, fitted as standard to the front axle of all models. The rubber bump-stop floats in hydraulic fluid within the shock absorbers, providing a highly compliant ride over poor surfaces. The result is a forgiving ride that’s quieter as well, even on my models larger 18in alloy wheels.

Handling is decent and twisty B-roads can be enjoyed – just don’t expect huge amounts of grip from this family car. Steering is on the light side, just like in the XCeed’s rivals, but can be weighted up a little by selecting “Sport” mode, which will also increase throttle sensitivity. However, the car is predictable enough when pushing on and is only just a tad short of feeling truly “sporty”.

Around town – where most XCeed’s will spend the majority of time – the Kia feels nimble enough to be a relaxing drive and visibility all-round is good, with the raised ride-height adding to confidence, as do the reversing sensors and rear camera. Smart Park Assist on the ‘4’ model will also parallel or bay-park for you.

In fact, the ‘4’ is very well equipped indeed and includes a fully-digital 12.3in. instrument display. With a high-definition display, the digital cluster replaces the conventional speedometer and tachometer dials found currently in the brand’s passenger cars. Its single, seamless display has pin-sharp digital dials for vehicle and engine speeds.

A multi-function display between the dials displays turn-by-turn navigation instructions, audio information and in-depth trip information, as well as vehicle diagnostics alerts, and pop-up notifications linked to the car’s various active safety and driver assist technologies. It replaces the physical dials and 3.5-inch mono TFT-LCD screen on ‘2’ models and the 4.2-inch colour TFT-LCD screen on ‘3’ versions.

Other technologies designed to enhance comfort and enjoyment include a JBL Premium audio system with Clari-Fi technology and black leather heated front and rear seats.

You won’t feel short-changed when you sit inside the Kia XCeed ‘4’ either as it feels every bit as premium as a Volkswagen, not quite as posh as a Mercedes or Audi, but more upmarket than the Ford Focus. Kia are getting better every year when it comes to interior ambiance and the XCeed will, err . . .  exceed most people’s expectations.

Inside, the Kia XCeed carries over the contemporary cabin architecture of its Ceed stablemates, with a sculptured centre console oriented slightly towards the driver.

A ‘floating’ touchscreen infotainment system stands proud of the dashboard, while the lower portion of the instrument panel provides a set of touch-sensitive buttons, dials and switches to control audio volume, heating and ventilation meaning you can make quick changes to the cabin environment without taking your eyes off the road for any longer than necessary.

You’ll find plenty of space inside the XCeed, despite it being classed as a “Compact” SUV. Sitting directly between the Ceed five-door hatchback and the Sportage, the XCeed still manages to provide comparable interior space and luggage capacity to many best-selling SUVs.

With the hip-point for each seat raised by up to 44mm over the Ceed, it is easier for occupants to step in or out. Meanwhile, the half-moon-shaped glass area and fastback roofline provide rear passengers with a brighter ambience and more headroom than some rivals offer.

With the car’s longer rear overhang creating a longer boot, luggage capacity for the Kia XCeed is 426 litres – 31 litres more than the Ceed. With the rear seats folded down, luggage capacity grows to 1,378 litres. Versatility is assured thanks to 40:20:40 split-folding rear seats, Smart Power Tailgate, and two-step boot floor that can be moved up or down to provide either more space or a hidden underfloor storage compartment.

It may not be the cheapest compact SUV around but the XCeed ‘4’ provides genuine value for money. It’s a great package and with some excellent finance offers available from Kia dealers, you could find your next motoring purchase exceeding all expectations.