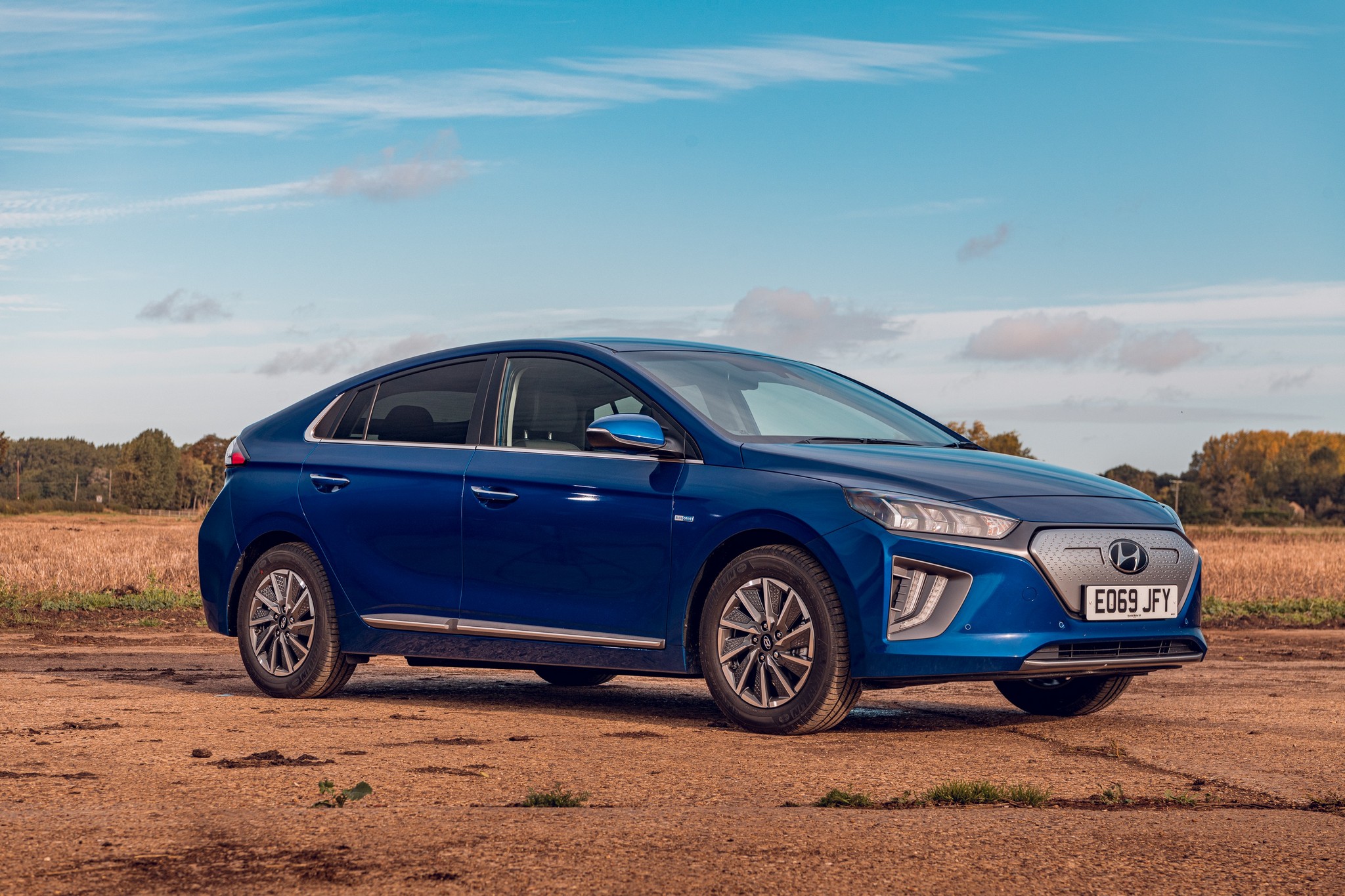 The Hyundai Ioniq Electric is the larger of the Korean manufacture’s zero-emission, fully electric vehicles (EV) with the mid-sized Kona Electric being its smaller brother. The Ioniq is also available as a Hybrid or Plug-in Hybrid (PHEV).

It’s a spacious hatchback rather than yet another SUV, so for those who prefer a more traditional ride-height and a fully-electric drivetrain, then the Ioniq Electric is certainly worth a look.

This 2nd-generation Ioniq Electric has just two trim-levels to choose from: Premium (from £30,950 OTR) and the Premium SE (from £32,950 OTR). I’ve been driving the Premium SE model which is very well equipped. However, the cheaper Premium model has everything you could possibly need and I’m not sure it’s worth the extra money for the likes of tinted rear windows, heated rear seats, part-leather upholstery, sunroof and some exterior chrome trim. Okay, there are also some driver-aids such as Lane-Follow Assist and Blind-Spot Detection but the core elements you would expect, along with the likes of Sat Nav and Apple CarPlay/Android Auto, are all included in the cheaper model.

It will come as no surprise that both models have exactly the same technical spec when it comes to the drivetrain, which consists of a 38.3kWh battery and up to 193 miles from a full charge. A home wall box will give you a full charge in just over 6 hours, while a 50kW rapid-charger can provide 80% charge in just under an hour.

It’s worth noting that, unlike a lot of manufacturers, Hyundai also provide an emergency 3-pin charging cable that will fit any domestic output. Be prepared to wait 19 hours for a full charge though.

Well, if you really don’t fancy a SUV you’ve only the Nissan Leaf to look at in this price bracket. Tesla and the Porsche offerings are way off this price point. The new Volkswagen ID.3 is interesting – and has a better range – but if you spec it up to Ioniq SE Premium level you’ll be spending more money for slightly less space and comfort.

The Ioniq isn’t going to set anyone’s heart racing when they first clap eyes on it – especially if they view it head-on where the large, plastic front grill looks like a last-minute, cheap-as-chips solution to distinguish the Ioniq Electric from its fossil-burning siblings.

My car’s undercoat-grey colour scheme wasn’t to my liking although in other colours the Ioniq looks rather smart.

Otherwise, the Ioniq Electric is perfectly fine, if a little anonymous. It’s tear-drop profile has a class-leading drag coefficient of 0.24 and while Hyundai describe it as “coupe-style” it won’t remind you of one. The split rear window is very Prius-like and the rear end is probably the car’s best outward feature. Both models feature 16in, aerodynamic alloys that are fine but don’t add anything to the car’s kerb appeal.

However, the interior of the Hyundai Ioniq SE Premium is much more interesting and doesn’t disappoint, with a premium-quality look and finish that trumps the Nissan Leaf.

The dash is modern and uncluttered with the climate getting its own touch-sensitive interface so there’s no need to take your eyes off the road to poke at an icon when you fancy a change of temperature.

Sitting centre stage is Hyundai’s new 10.25in infotainment screen which is impressive in both size and functionality with a split-screen mode that never bombards your eyes with too much info. The main screen also has a row of touch-sensitive buttons along the bottom and a good, old-fashioned volume button in the middle so it’s easy to get to your radio, sat nav and media settings without getting distracted. All together a very well thought out system that is easy to use.

The fully-digital driver display is also sharp and easy to read and although very configurable, the emphasis is on efficient driving to maximise range.

The front seats are comfortable and, like the steering wheel, heated. Visibility is very good except for that rear split window which is narrow but doesn’t really present any problems. There are front and rear parking sensors as well as a rear parking monitor and a parking guidance system – so you shouldn’t really have a problem when manoeuvring.

Auto lights and wipers along with high-beam assist are standard on both models, as is adaptive cruise control with stop and go function for those slow commutes into work (remember those?).

Rear space is good, even with that sloping roof-line and 3 kids should have no problem at all, even on longer journeys. Headroom is okay for all but the tallest of adults and boot space is decent at 357 litres.

After covering over 300 miles in the Ioniq SE Premium I can honestly say it is one of the most relaxing cars I’ve driven. Okay, all EVs are relaxing by the very nature that they are so quiet and feel effortless. There is a little whine from the single-speed transmission when pushing on but it’s by no way intrusive and you only notice it anyway because the car is so hushed.

You won’t be winning any traffic-light drag races in the Ioniq Electric, although a 0-60mph time of just under 10 seconds is perfectly acceptable for a mid-sized family hatchback.

But does that mean the Ioniq Electric is unsatisfying to drive? No, not really because the Ioniq is an EV so you’ll find the smooth surge of torque very satisfying in those moments where you do want a quick getaway. It’s quite addictive at first, if you’re new to EVs, but also very safe when pulling out of junctions, entering a roundabout, etc. as you can’t miss a gear, stall or bog-down like you can in a diesel or petrol car.

There’s another kind of satisfaction to be had from driving the Ioniq Electric too – brake regeneration, which puts power back into the battery every time you apply the brakes. It feels like you’re getting free fuel.

The amount of regen can be adjusted via the flappy paddles behind the steering wheel. Set this to maximum and you’ll find you hardly need to use the brake pedal at all – sounds a bit scary? Not at all, it’s something you get used to surprisingly quickly with the added benefit that your predicted range increases too.

Apart from the ride being very quiet you’ll also find it is pretty smooth too as those 16in tyres have enough sidewall damping to help take the shock out of most road imperfections. You won’t be throwing the Ioniq around A-roads though as it’s definitely built for comfort and range rather than performance.

Among other clever tricks, the Ioniq Electric can be pre-heated via an app on your smartphone so that it’s toasty warm when you set off on a cold, winter’s morning.

The Hyundai Ioniq Electric Premium SE fulfils its brief very well. A fully-electric vehicle that will carry a family of 4 or 5 in comfort for almost 200 miles before needing a charge. It is packed with technology, not just under the bonnet but in its user-friendliness as well.

Quiet and relaxing around town or on the motorway, the Ioniq may be the only EV you’ll ever need.