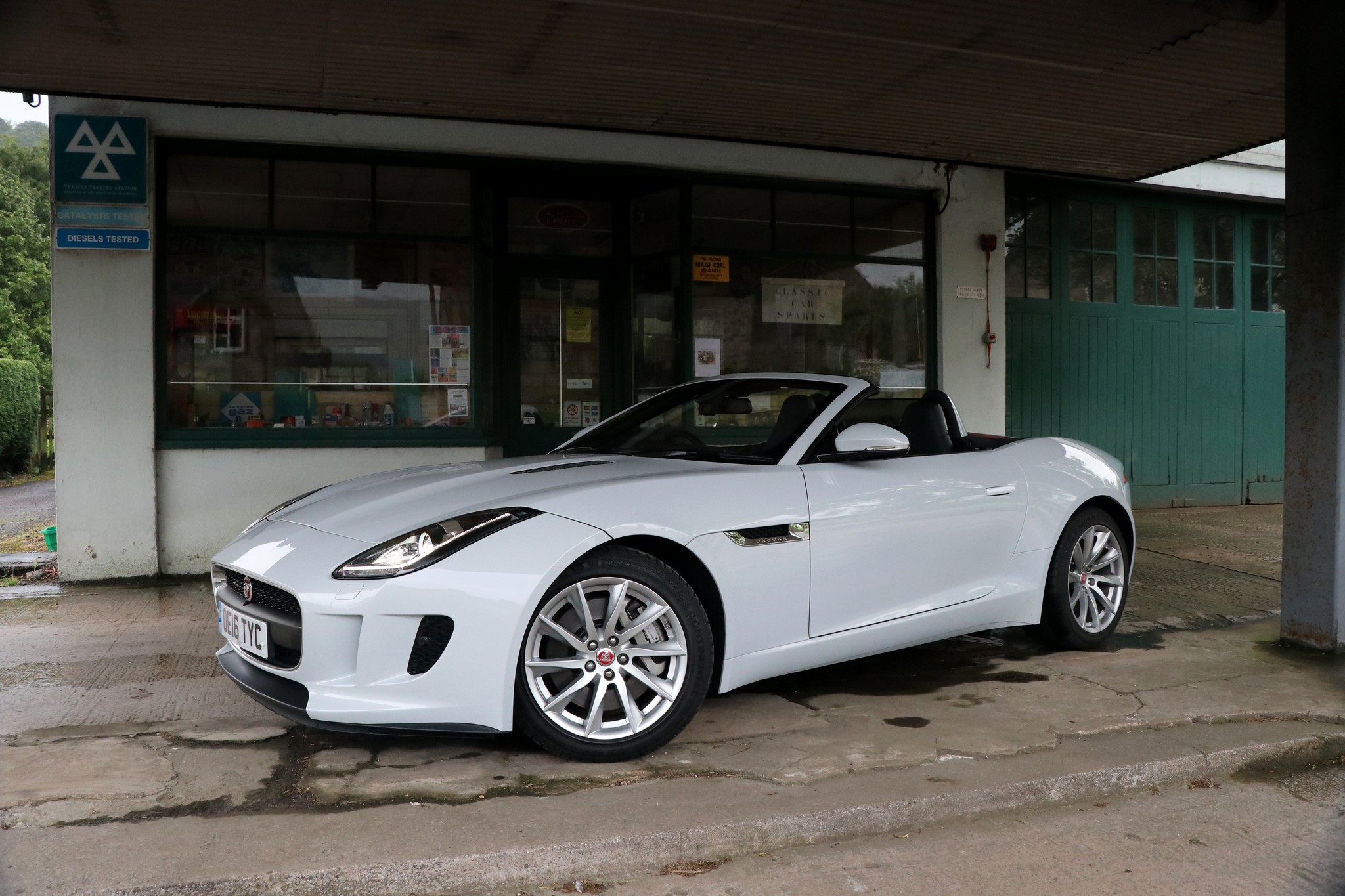 THERE are some cars you look forward to driving more than others.

Unbiased professionalism is all well and good but when you’re presented with something as achingly beautiful as a Jaguar F-Type then it’s all too easy to over-reach for superlatives.

So, in the interests of balance let’s start with a negative observation: The Jaguar F-Type Convertible is utterly gorgeous from any angle. However, if you have the roof up the F-Type coupe is slightly better looking from the side. Maybe.

Oh, and if you option a spare wheel for your F-Type convertible then get used to the idea that you have no luggage space. Virtually nil. Now that’s out of the way let’s get on with the superlatives.

The Jaguar F-Type convertible has been around since 2012 with the coupe arriving a year later in 2013 but it still stands up very well to rivals. Porsche have released a new Boxster S in that time and although it looks and drives great it melts into the background when viewed next to the F-Type.

The front-engined, stub-tailed F-Type sits low down on its haunches with splayed wheel arches that make it look like a big cat ready to pounce. Yes, pretty much like its granddaddy the E-Type – and we all know how much love that car has generated over the last 50-odd years.

While the F-Type has yet to become a universal icon like the E-Type it certainly makes people stop, stare and wander over. So, if you think you can just nip out to the petrol station to top up your F-Type then think again. Over the 7 days of driving it I spent approximately 5 minutes putting petrol in it and about 3 days answering questions and showing people around it. If you don’t like people, don’t buy an F-Type. Get a Toyota instead. I can recommend the Toyota Prius if you want to remain on friendly terms with your neighbours – especially if, like me, you leave very early for work. You see, the Prius will slip silently (almost apologetically) off your driveway leaving Frank and Irene blissfully unaware that you’ve even left. Or that you even own a car.

The V6 Jaguar F-Type doesn’t do that. What it does instead is bellow very loudly “Morning everybody! I’m a Jag! Woo Hoo!” It’s like car-sharing with Brian Blessed.

There’s nothing you can do about it either – as soon as you hit the start button the supercharged Jag clears it’s throat with a deep growl that changes to a loud rumble before settling down to a purr-like burble. It sounds utterly wonderful despite what Frank or Irene may think.

If you go for the 550 PS, 5-litre V8 with AWD then you will have to move to somewhere rural where your nearest neighbour is at least 5 miles away. Then again, if you can afford £90,860 for the F-Type R the chances are you don’t live on an estate anyway. There is a new entry-level F-Type with a 4-cyclinder, 2-litre turbocharged engine that still produces 300 PS – but I wouldn’t count on it being “neighbour-friendly” either. However, it is a little more wallet-friendly at £55,385.

No, the F-Type isn’t cheap and the convertible even less so. But we are talking about a platform that is capable of super-car performance – the range topping F-Type SVR convertible AWD has 575 PS and can hit 60mph in just 3.5 seconds with a top speed of 195mph. It costs £116,365 which puts you into Ferrari California territory so, to my mind, the entry-level model – which provides as much fun as anyone should be having in a car, fully-clothed – is a bit of a steal.

You also won’t feel short-changed when you climb inside as the F-Type interior is not only stylish but cossetting too without feeling cramped. A 6-footer could get comfortable in the F-Type no problem – even with the roof up. The 2 analogue main dials are perfect for this car – simple and clear to read while the 6-speed manual gearbox is satisfying to use with a clutch that is surprisingly light and won’t make you wish you’d gone for the more common 8-speed auto.

The chunky, 3-spoke leather, power-adjustable steering wheel feels great too while the sculpted, lightweight seats are leather with suede-cloth facings and have 6-way electric adjustment so getting comfy won’t be a problem.

There is an updated 8in infotainment screen that has touch-sensitive buttons for all your main functions which I found clear even with the roof down and the sun shining.

Speaking of the powered hood – I found it very handy that the hood can be open/closed at speeds of up to 30mph as joining the A628 Woodhead Road from Glossop is a poor junction for visibility and with the hood up virtually impossible to see traffic from the left. Being able to drop the hood in just 12 seconds while slowing for the junction made things much easier. Sound insulation is excellent with the roof up and almost as good as the coupe but with the roof down I found the 770W Meridian sound system was redundant because the supercharged V6 sounded so good. Not loud enough? A press of the switchable Active Sports Exhuast button (£360 option) will send the exhaust gases a different route and produces some real rip-snorting sounds that led Mrs. B to rename the button the “Show-Off Switch”. Fair enough . . .

Hit the road and the F-Type convertible is everything you hoped it would be – agile, eager and very, very quick. 0-60mph in 5.5 secs may not sound blisteringly quick these days but your smiles per hour will be stratospheric anyway, so who cares? There’s always the SVR and even in 7 days of foul weather I still managed to smile every time I drove the F-Type.

Torque Vectoring (£1,060 option) which provides independent braking of the inside front and rear wheels during cornering, ensures tighter turns with virtually no understeer and accelerating hard out of bends feels controlled as well as thrilling.

All-round aluminium double-wishbone suspension also helps keeps the car flat through cornering and the steering is suitably weighted to give loads of feedback with absolutely no wooliness at all. What amazes most though is the ride comfort. With such a powerful, low-slung sports car you would be right to expect a jolting ride but whatever alchemy Jaguar have applied to the F-Type works very well. Of course it’s not Jag XF smooth but it’s certainly a ride you could live with every day – and I can’t even say that about the VW Golf GTI.

The F-Type convertible is a brilliant tool for creating happiness. Not just for its owner but for those who will naturally gravitate toward it. The fact that it can also get you from A to B very quickly makes up for the fact that it ain’t cheap to buy or run. But is it worth having? You betcha it is.