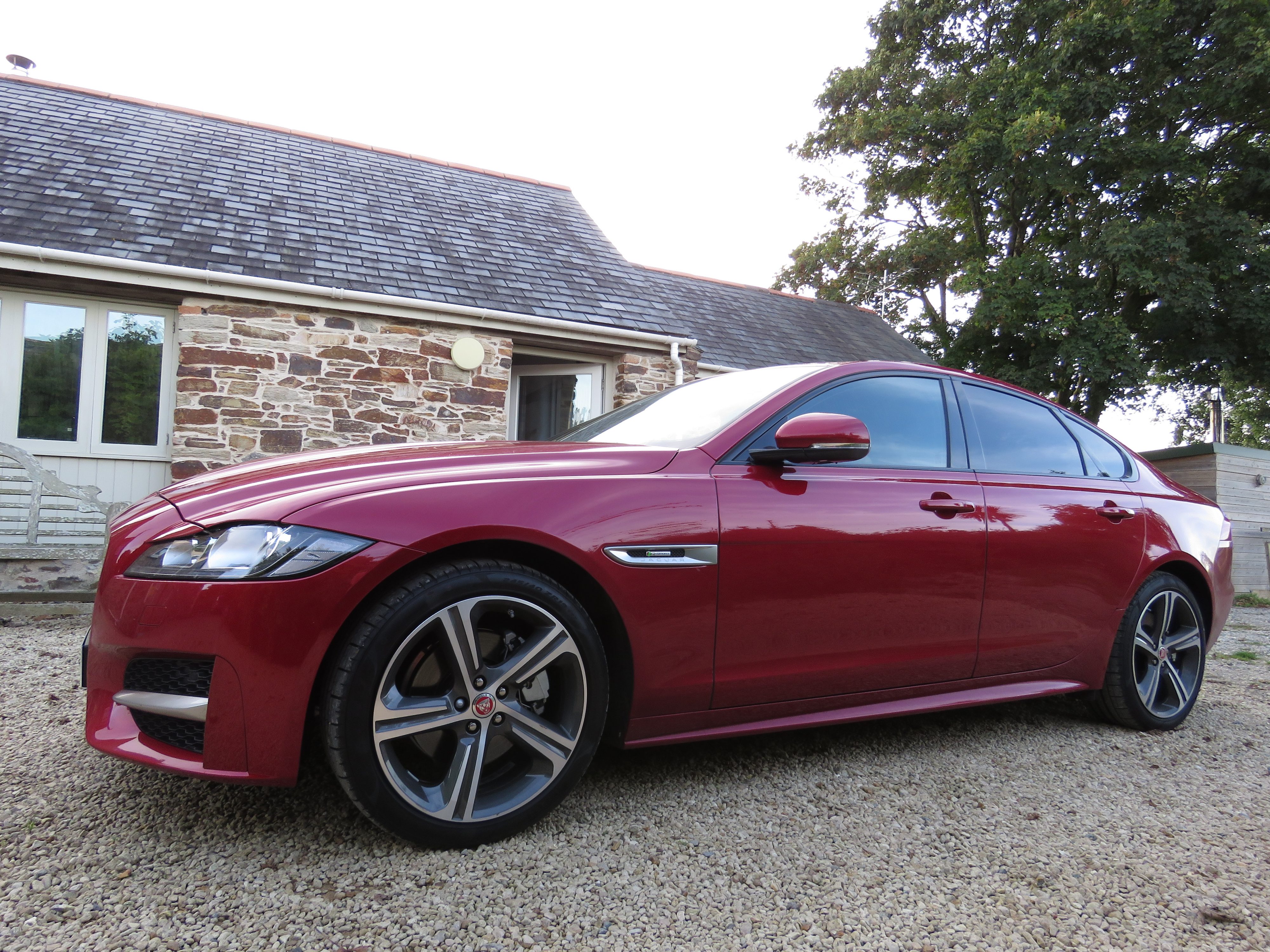 Mid-range Jaguar has the XFactor

For all the world looking like a stretched version of the excellent Jaguar XE, the XF is now brought bang up to date with sharper looks and better on-board tech. A major complaint about the previous XF was the lack of space for rear passengers. Access was also a little tight back there due to the sloping roofline and when it came to the power units it also fell some way behind it’s rivals – the Mercedes-Benz E-Class, the Audi A6 and the BMW 5-Series – which were more fuel-efficient.

But with the new Ingenium diesel engine and an extra 27mm of knee room in the rear these issues are now addressed and we can safely say the Jag is now the class leader when it comes to prestige cruising saloons.

There are four  trim levels to choose from – Prestige, R-sport, Portfolio or the range-topping S. The first three are available with either a 163PS or 180PS 2.0 litre Ingenium diesel engine and you can specify AWD if you are feeling flush. Jaguar’s silky smooth 8-speed auto box is also available across the range. Economy is good too with the 163PS manual capable of 70.6mpg on the combined cycle and just 104 g/km of CO2 making it a tempting proposition for the company car owner. The 180PS version doesn’t fare much worse with figures of  65.7mpg and just 114 g/km of CO2. And that’s with the auto box; the manual is slightly better. I managed an average of 48mpg on our trip down south which was certainly acceptable given the amount of stop-start traffic we found ourselves in all too frequently.

The S model is available with either a 300PS V6 diesel engine or the magnificent 380PS V6 petrol engine from the F-Type. The 3.0 litre V6 diesel is capable of a respectable 51.4mpg combined and 144 g/km of CO2. I was driving the 180PS R-Sport and with the all-new aluminium chassis and that new Ingenium 4i turbo-charged diesel unit I was expecting it to be both quick and economical – being a Jag it would undoubtedly be comfortable too.

From the outside the XF looks every bit a sporting saloon. From the “mouth wide open” front grill to the raked roof line and subtle side skirts there is no doubt this car is slippery-sleek. The rear light clusters now fit right in with the rest of the Jag family, being narrower with that “droop” look towards the centre of the boot lid. The Italian Red (£690 option) paintwork looks fantastic and has just enough metallic fleck in it to give a shimmer. Inside is very much in the XE vein too. In fact, blindfold me and sit me in either a Jag XE or Jag XF  and even on removing the blindfold I would struggle for the first minute or so to tell you which model I was in – until I turned around to look at the rear space of course.

But this is no bad thing as the interior of both models is very good indeed. Premium-feel surfaces abound in the cabin with soft-touch nearly everywhere, bar perhaps lower down on the doors where the materials are merely good.

You feel hunkered down in the cockpit with the central transmission tunnel being raised enough to give the impression that  you are sat lower than you actually are. You won’t struggle to get in and out of the XF as a consequence. The red-lit  pulsing engine start/stop button is there of course, along with the silently rising gear-selector (if you opt for auto transmission – and on a Jag, who wouldn’t?) which never fails to impress Jaguar newbies. The XF also showboats with outermost  air vents that swivel open from their closed, flush-to-the-dash position when you start the engine. Nice.

The driving position is spot on and with plenty of adjustment for both seat and steering wheel you won’t struggle to get comfortable.

My car came with the no-cost option of Jet/Redzone leather which, not being a fan of all-black interiors on ANY car, I absolutely loved. The heated front seats hold you very well indeed and lumbar support is standard for the driver. The infotainment system is a radical improvement from the older model. The 8in landscape touchscreen is simply and intuitively laid out and it’s great to see decent sized icons that aren’t a nightmare to touch when on the move. Beneath it lie a couple of  neat row of buttons for the climate and temperature controls. All very simple and easy to use.

All XFs come with good standard equipment such as Sat Nav, dual-zone climate control, heated front seats, cruise-control with speed limiter and a road sign recognition system as well as auto lights and wipers and electric windows all round.

JaguarDrive Control also lets you choose from four drive modes: Standard, Eco, Dynamic or Snow – all at the touch of a button below the rotary gear-selector. But does this all add up to a great driving car? A resounding “Yes” is the answer. The XFs lightened chassis and responsive engine make for an excellent motorway cruiser that can also be a lot of fun on the A-roads too. The electronic steering is, in my mind, the best in it’s class with a weightiness to it that could almost make you think it’s hydraulic.

And when you’re throwing it around bends it just doesn’t feel like a big car – that quick-steering rack makes it very responsive and you could almost be in the smaller XE.

But therein lies the problem for me. The smaller XE is definitely even more fun to drive;  it’s nimbler, more focused and to my eye, at least, better looking. And don’t forget I’m comparing it to the XF which is great to drive, nimble and very good looking. See what I mean? If you don’t need the extra space in the rear then Jaguar may have just given you a huge dilemma.