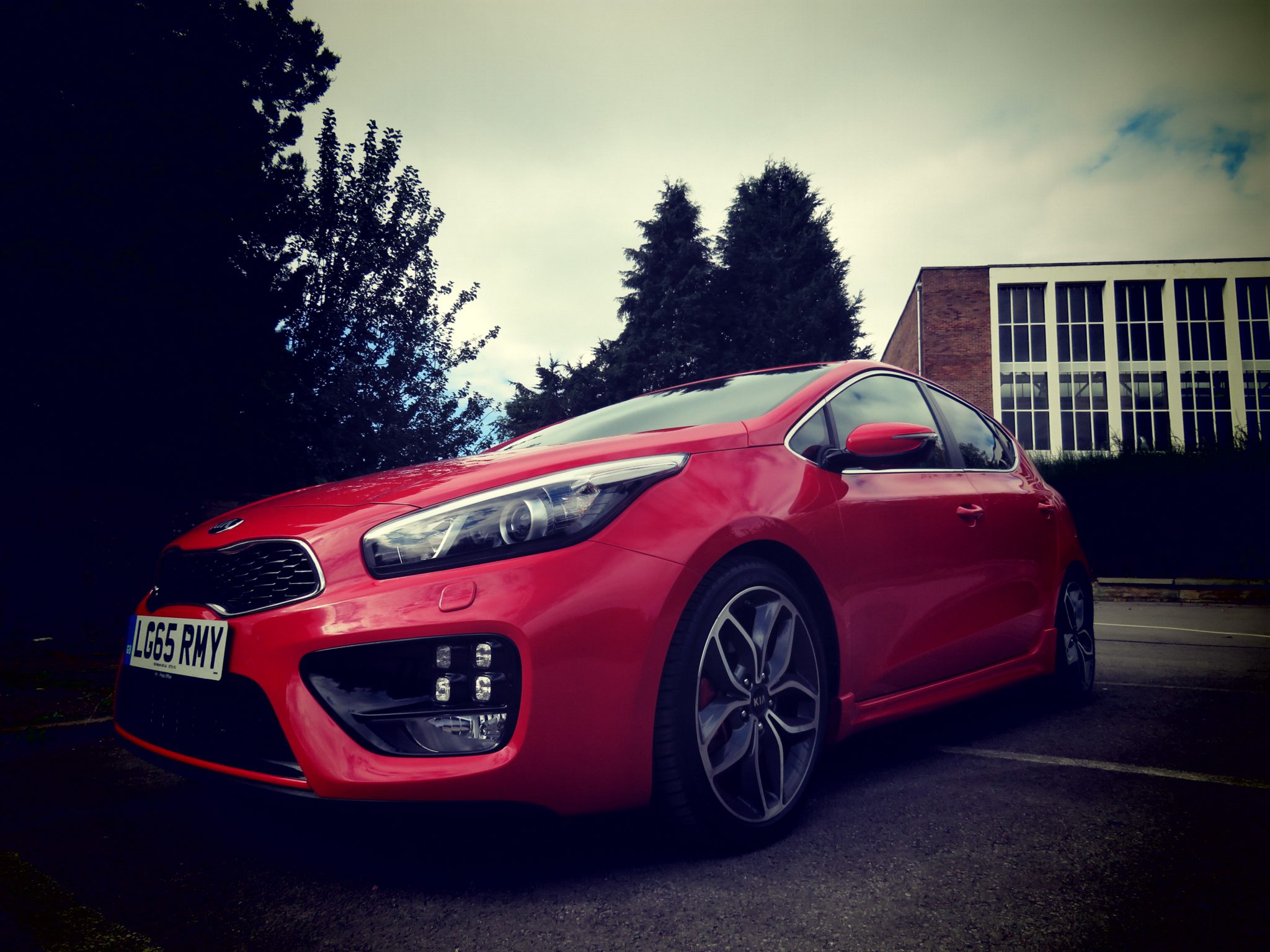 The new Kia cee’d GT (or cee’d 1.6 T-GDi GT to give it it’s full moniker) is a bit of a looker. I especially like the low swooping roofline rising from the steeply-raked windscreen, the dual rear exhausts, bright red brake-calipers and the rocket-launchers in the front grill.

Okay, I lied about the rocket launchers but that’s the first thing I thought of when I saw the “ice-cube” daytime running lights. Anyway, they look pretty cool as does the rest of the car, hunkered down on those sporty 18in graphite finished alloys and dark privacy glass in the rear windows and tailgate giving it an over-all stealthy appearance.

The front view is definitely more aggressive looking than the rear view which is softer but still has sporting appeal with those dual exhausts and rear diffuser. All-round, a good looking sports hatchback that has the practical advantage of 4-doors over its stable mate the Pro_cee’d GT. Is it a viable alternative to it’s main rivals though? The Ford Focus ST and the Volkswagen Golf GTI are both big-hitters when it comes to hot-hatch Nirvana and probably a starting point for anyone looking to get down the road quickly while having enough practical space to accommodate family.

Well, the good news is that the Kia cee’d GT ticks both those boxes – it is quick AND roomy while undercutting the price of the equivalent-specced Ford and VW by a substantial margin – we’re talking almost £3,000 here. Oh, and let’s not forget Kia’s excellent 7-year/100,000 mile warranty – something neither Ford or VW can match.

And the downside? Well, if you want the absolute best driving, quickest and most entertaining drive in this sector you’ll have to splash the cash and go for the Ford which has 247bhp on tap as opposed to the Kia’s 201bhp. The VW Golf GTI has 217 bhp. The Kia’s 1.6 engine isn’t the most economical either, giving a combined mpg of just 38.2 – both rivals can do a little better. C02 emissions aren’t very competitive either at 170 g/km.

Is it entertaining enough though? Well, yes – and with a 0-60mph time of 7.3 seconds and a top speed of 143mph it’s going to put a smile on your face.

That smile won’t be wiped off by the cee’d GT’s handling either as it’s very good on the twisting A-roads and forgiving enough on rougher surfaces to ensure that you don’t lose any fillings.

The electric powered steering is weighted well and gives enough feedback through the wheel to instil confidence when pushing on and I must say the driving position is excellent with those Recaro’s holding you well. Visibility all round is good although those steeply-raked A-pillars were a little obtrusive at some junctions. The 1.6 turbo-petrol engine pulls very well with almost no turbo lag but I did find it a little underwhelming in the acoustic department and pushing the GT button on the steering wheel only improved things a little with a subdued, synthesised rasp coming into the cabin.
Again, perhaps not quite up to the Ford and VW for out-and-out entertainment, but it won’t disappoint – and that 3-grand in your back pocket will widen your smile even more . . . Most of the surfaces feel premium too although some of the lower plastics are a little on the cheap side – although they’re not the ones you’ll touch very often.

Reversing sensors, Hill Start Assist, cruise-control with speed limiter, push-button start and auto lights and wipers are among the many driver-aids which altogether add up to a lot of extras for not a lot of money. The Kia cee’d GT is practical too and with 380 litres of boot space it trumps the Ford Focus. Split folding rear seats give 1,300 litres and those extra 2 doors at the rear open wide enough to make entry and exit a doddle.

Should it be on your radar? Depends on what you’re after. If it’s ultimate thrills in a mid-sized hatch then maybe not. If it’s 4-doors, plenty of thrills, a cast-iron warranty for peace of mind and a wad of cash saved then it’s hard to beat.