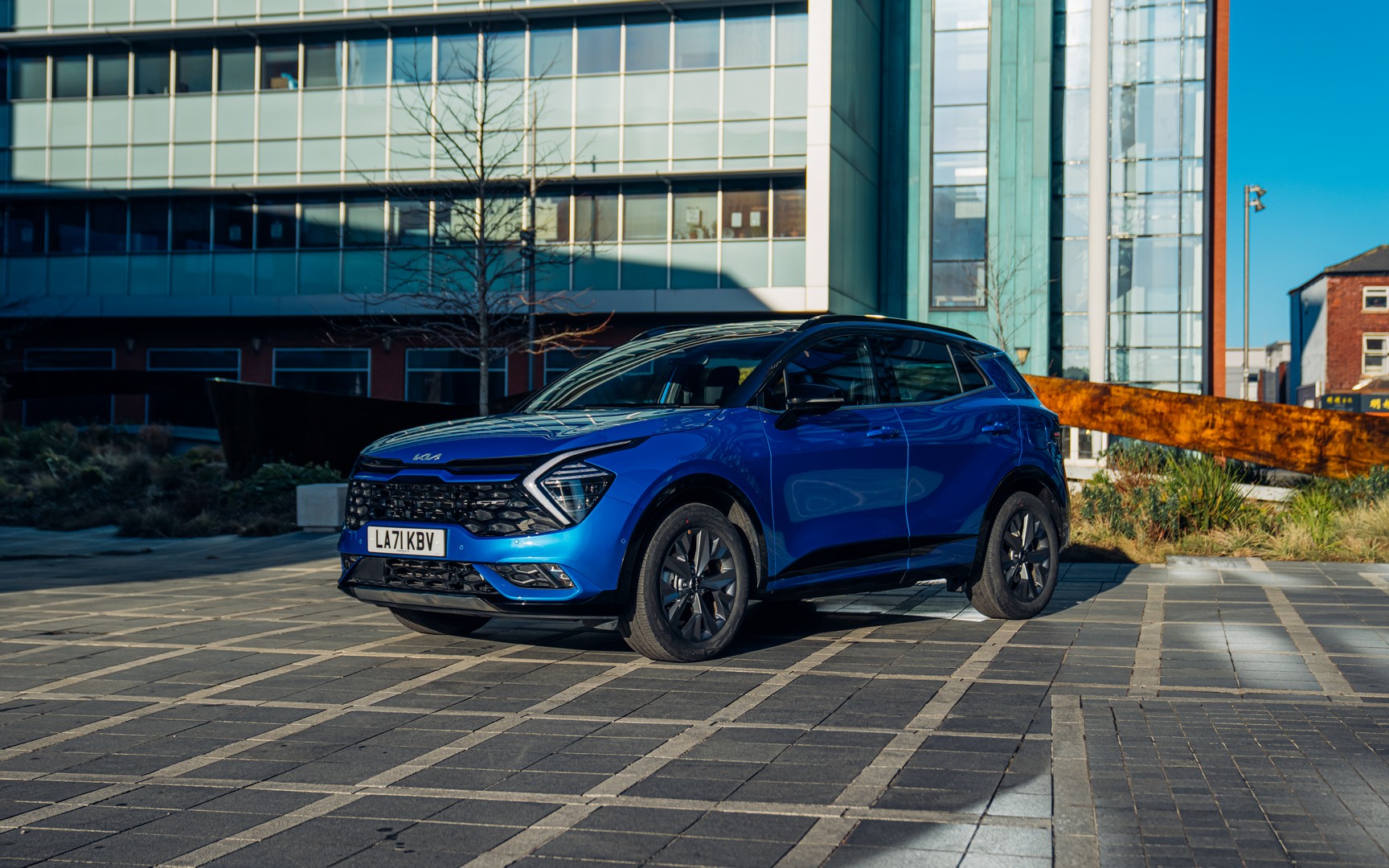 KIA have recently brought their best-selling family SUV bang-up-to-date with a radical new look that makes the 5th-generation Sportage a bit of a stunner both inside and out.

Taking design cues from the all-electric EV6, the new Sportage is striking from both front and rear with sharply contoured boomerang-like LEDs at the front and a swooping, fastback design at the rear. It all looks more muscular and sharper than what has gone before.

Designed specifically for the European market, the new Kia Sportage not only looks impressive as a piece of design, but it appears bigger and more imposing than I first thought it might. It’s larger than the Nissan Qashqai and VW Tiguan but smaller than the Peugeot 5008 and Mazda CX-5 – so I’d class it as a mid-sized SUV that is generous on space.

Another give-away, as to the size of the new Sportage, is the amount of interior space. It’s also impressive and more than enough for the growing family.

Available as a petrol, mild-hybrid, full-hybrid or plug-in hybrid (PHEV), the Sportage is available with front-wheel-drive or all-wheel-drive options. Trim levels are typical Kia, starting with the ‘2’ and going onto the GT-Line, 3, 4 and GT-Line S

I suspect the GT-Line mild-hybrid with a 7-speed DCT gearbox may be the sweet-spot at a shade under £32,000 – which is a heck of a lot of SUV for the money if you really don’t need AWD.

However, I’ve been driving around in the full-hybrid Sportage (NOT plug-in-hybrid. Yes, I know, it can be quite confusing . . .)

With 2WD and 226bhp on tap, my GT-Line S model has a 6-speed automatic gearbox and 350Nm of torque which all combines to give a 0-60mph time of 7.7 seconds – quick enough for any family-lugger in any situation, I would think.

But it’s the interior of this Sportage that really impresses and it’s the twin, 12.3in wrap-around touchscreens, that impresses the most. Colourful, sharp and responsive, the screens are a delight to use, although the infotainment side of things takes a little studying at first as the options are immense.

Below the central screen is a bank of touch buttons that can be alternated between climate controls and infotainment/nav options at the touch of a button – all clever stuff that saves space and confusion.

The centre console is also minimalist with a simple, large rotary gear-selector dominating with a smaller selector for drive modes (not sure why, as there are just the 2: Eco and Sport). There are also buttons for heated/cooled seat settings as well as camera views and hill-descent selector.

It all feels very open and airy up front with the huge panoramic sunroof allowing even more light in if you choose to slide back the blind. Materials feel premium while fit and finish is on a par with German marques and somewhat better than the likes of Ford, Vauxhall and Peugeot.

The chunky leather steering wheel feels top class and a good driving position is easy to find thanks to plenty of adjustment in both seating and steering wheel. The leather and Alcantara seats look quite sporty and hold you well, although I did find the seating a little firm. On a 300-odd mile trip down south I did suffer from a numb backside which required a comfort break.

There are some nice touches inside the Sportage, including hanging space on the back of the front seats for handbags, shopping and even a fresh shirt if needed. There are USB charging ports for the rear passengers, who also get their own climate controls along with reclining backrests if they wish to chill out a little more on longer journeys. So, the kids are well catered for while the width of the Sportage means 2 kids will be more than adequately separated. . .

The new, slim-line front seats mean rear passengers get plenty of leg room while even 6ft passengers have enough headroom – even with the panoramic roof. There is no loss of space over the petrol version as the hybrid stores its battery beneath the rear seats.

On the road the new Kia Sportage is a delight both around town and on the motorway. Slipping silent away in EV mode, the 44.2kW electric motor only calls on the petrol engine when needed – which was surprisingly less often than I had thought – although it is not always obvious when the engine kicks-in.

The all-round fully-independent suspension has been tuned for European roads and although we might think UK roads are a different prospect altogether, I found the Sportage handled every kind of lump and bump very well indeed. The 6-speed auto gearbox is a little dim at times and not as quick as a CVT, but it does the job well enough most of the time.

Body-roll was barely noticeable on country-lanes and undulations didn’t have me or my passenger reaching for the sick bags. It all felt well-controlled and surefooted – I assume the AWD version is even better.

The new Sportage lacks a little steering feel which doesn’t encourage you to drive sportily. But if hitting apex’s isn’t really your thing then the Sportage is satisfyingly competent on twistier roads while remaining refined and comfortable on others. Just as it should be.

Another nice touch – in a long line of nice touches – is the camera view you get when indicating to turn left or right. The corresponding main dial in the dash changes to a camera view along the length of your vehicle. Very cyclist-friendly, and although the purists will be screaming “Use your mirrors!” it’s another safety-feature that makes a lot of sense.

There is much to like about the new Kia Sportage and I guess, like its predecessors, it will sell by the bucketful. The levels of tech, comfort and space are impressive in this price bracket and along with its bold design and Kia’s 7-year, 100,000-mile warranty it all adds up to another sure-fire winner for the Korean company.