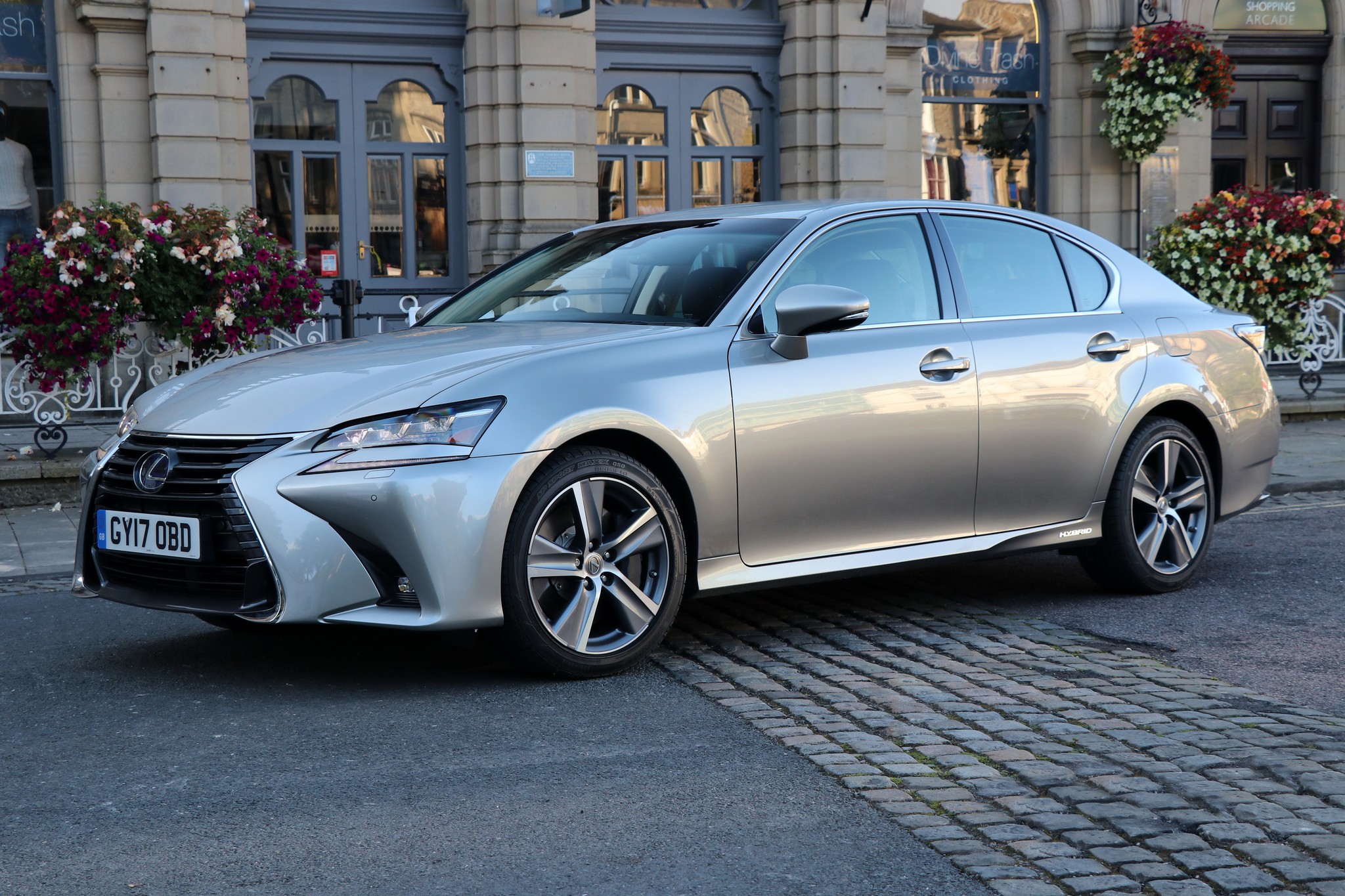 LEXUS don’t do the obvious. If they did then their 4-door executive saloon would have a powerful diesel engine fitted upfront, say like BMW, Audi, Jaguar or Mercedes. But no, Lexus do things differently and therefore you’ll find the Lexus GS utilises a petrol engine which is backed-up by a powerful electric motor.

Yep, hybrid is the way to go say Lexus and although that sounds like a pretty solid argument, given the questions surrounding diesel emissions lately and the fact that some manufacturers are dropping oil-burners altogether, does it make sense in practice? The Lexus GS is available with two different power set-ups. There is the GS 300h which uses a 2.5-litre, 4-cylinder “Atkinson Cycle” petrol unit mated to an electric motor and then there is the much more lairy GS 450h which, in place of the 2.5 litre unit has a V6 3.5-litre petrol engine instead.

While the GS 300h manages a respectable 0-62mph in 9.2 seconds, the GS 450h will manage it in under 6 seconds while still achieving 45.6 mpg on the combined cycle. Impressive figures for a mid-sized sports coupe, never mind a BMW 5 Series-rivalling saloon that comes with 4-doors and a spacious interior. For starters, I like the exterior styling – typically modern Lexus – with more swoops than a murder of crows. I even like the huge, open front grille that seems to divide opinion and overall I think the GS is a very imposing car that is different enough to attract some admiring glances – well it did when we took it to the spa town of Buxton for a photo-shoot where people were interested enough to approach us and ask questions. All comments were positive and although the exterior impressed, the interior was what pleased people the most. And you can see why. The black semi analine leather with contrasting stitching is complemented by the dark, polished wood inserts that are also present on the heated leather steering wheel – although I would have preferred an all-leather wheel as I find the wooden parts are a little hard to the touch and I’m not keen on the change of texture when passing the wheel through my hand. Fit and finish is right up there with the best from Germany, albeit probably not quite so well laid-out or ergonomically pleasing. It’s not quite as clean-cut as the Audi A6 but to my eyes is more interesting.

There’s plenty of comfort to be had though with front seats which are ventilated as well as heated. Rear passengers have to make do with heating only. Shame. Sat in the driver’s seat is the best way to appreciate the GS 450h Premier’s interior and the first thing you’ll notice is just how comfortable the seats are. They hold you very well too, having decent sized bolsters and with 18-way electric adjustment as well as 4-way electric lumbar support for both driver and passenger you’ll have no problem finding just the right set-up. The centrally-mounted analogue clock just above the Mark Levinson-branded CD slot is a nice touch and although the first impression suggests there may be too many buttons and switches spread across the dash and steering wheel, it actually works very well and is more intuitive than you may first think. It’s only the horrible mouse-controlled interface for the infotainment system that spoils the party, being way too sensitive and awkward to get the cursor just where you want it – and that’s when you’re stationary.

However, in fairness to Lexus, since handing the car back I’ve been told that it is possible to alter the mouse-sensitivity and that if the minimum setting is chosen the system becomes much more manageable. The 12.3in infotainment screen itself is well placed and crystal clear as well as being very intuitive to use. The Sat Nav is easy to programme and works well as does the DAB radio and Bluetooth interface, although it’s a pity there is no Apple CarPlay or Android Auto at this price.

The 17-speaker Mark Levinson sound system needed a few tweaks in the audio settings to get the best out of it but then it sounded very impressive indeed.

A colour Head-up-Display (HUD) is standard on the Premier model which is configurable to show not just speed but Sat Nav info and road-sign info if you wish. There’s plenty of room for two passengers in the rear but the middle seat is a little awkward due to the transmission tunnel and the fact you sit higher means headroom is only okay for those under 6ft. tall.

The boot isn’t as big as some rivals due to some space being taken up by the hybrid’s battery pack but it’s still plenty big enough to take 3 good-sized suitcases with room to spare. The big difference between the Lexus GS 450h and its main rivals though is, of course, in the driving. Being a hybrid the GS pulls away smoothly and silently in EV mode which makes a pleasant change from the rattle and clatter of a cold diesel engine first thing in the morning.

Even when up to speed and with the 2.5-litre V6 cutting in, things remain pretty quiet. Okay, the modern diesel engines are hardly rattly these days but they still can’t compete with a smooth petrol unit when it comes to refinement. I found the CVT gearbox helped here too with its smooth, linear power delivery – although it did seem a little dim-witted when pushed hard and whined a little in protest at the red line. There’s always the paddle-shifters though if you really want to get the best out of the extraordinary acceleration the GS 450h is capable of.

However, and here’s the rub; the GS 450h just doesn’t feel like much fun to drive. The adaptive dampers fall between two stools – a little too hard to make the GS a satisfying long-distance cruiser and a little too soft to enjoy throwing it around corners – even with its trick 4-wheel-steering. Sure, the comfort is more than enough on a day-to-day basis but the Jaguar XF, for example, has bags of comfort but also makes you want to go for a drive just for the hell of it. The BMW 535 diesel is quicker, will return better mpg and holds the road better too. So, is hybrid the way to go when it comes to executive saloons? Probably, but this face-lifted Lexus GS 450h has some way to go still to catch up and eventually overtake its oil-fuelled rivals. Refinement is terrific, build-quality is exceptional and styling is inspired but until a hybrid system can reap much bigger benefits to running costs (I averaged just over 30 mpg), people will still look at the figures and opt for diesel – unless the government has other ideas to change your mind of course . . .