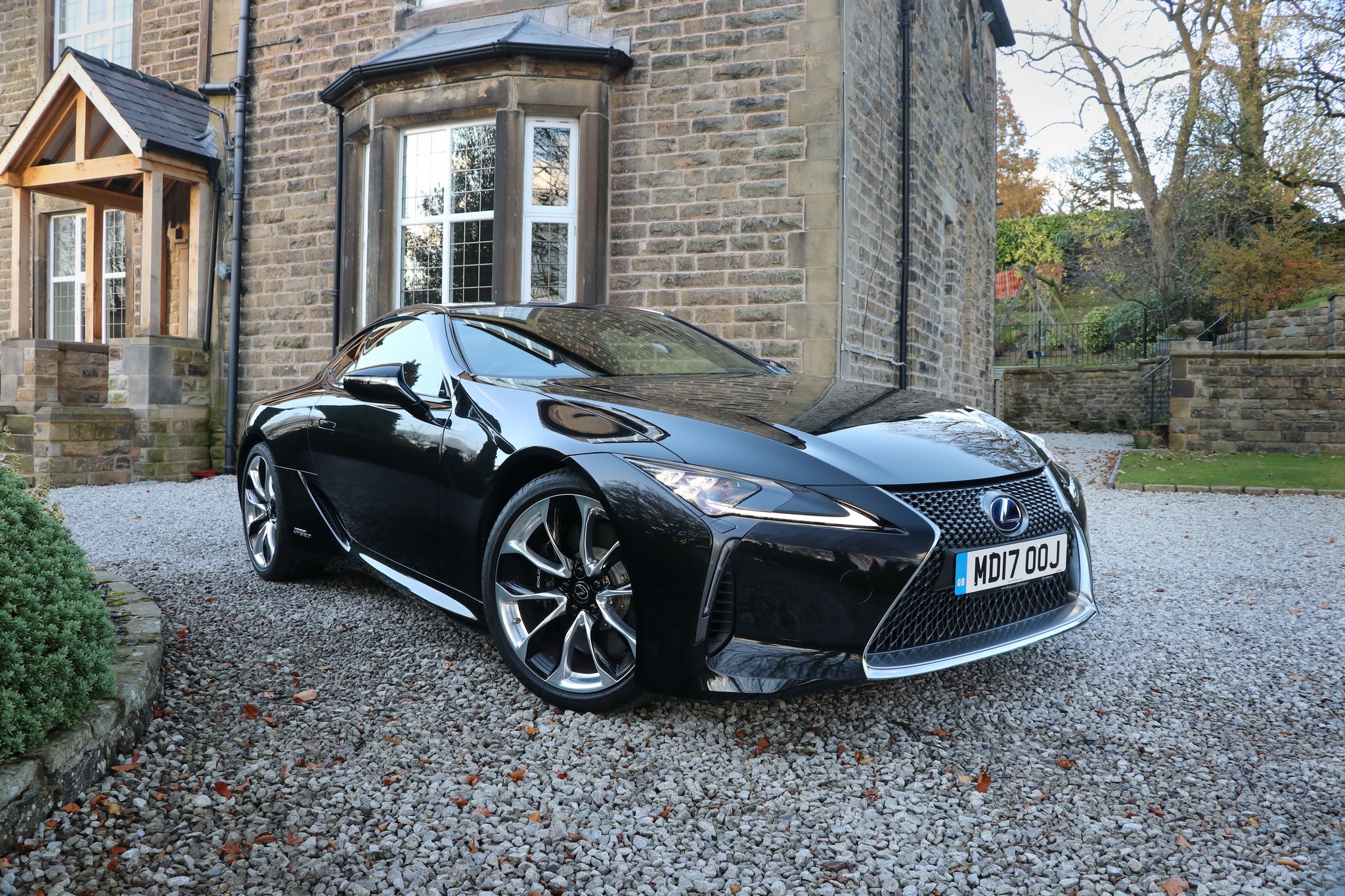 THE new Lexus LC 500 surprises on a couple of levels. First off it’s surprising that it remains virtually identical to the visually-stunning LF-LC concept car that was revealed in 2012, and secondly it’s surprising at just how accomplished this 2+2 sports coupe is to drive. Lexus really have delivered on the concept dream – and to some tune.

There are two distinctly different drivetrains available – the LC 500 has a glorious-sounding V8, 32-valve petrol unit that develops 477 bhp and is mated to a 10-speed Direct Shift Automatic gearbox, while the LC 500h has a V6, 24-valve petrol engine and an electric motor which, together, produce 359 bhp. The hybrid also gets a hybrid auto gearbox – a Multi Stage Hybrid system that utilises a conventional 4-speed auto box, mated to a re-worked CVT system that gives, effectively, 10 gears and does away with that annoying “rubber-band” feel of conventional CVT-only gearboxes.

There is no price difference between the two so it’s simply a matter of bragging-rights and a sweeter soundtrack for the V8 or have your cake and eat it (without giving the taxman too big a slice) with the hybrid, which emits just 145 g/km of CO2 and is capable of 44 mpg on the combined cycle; which is impressive for such a high-performing luxury GT.

Whichever you choose you’ll need to be prepared for a lot of attention. It’s not just the fact that the LC 500 is such a rarity on our roads that makes people stand and stare – it truly is a piece of rolling-art in its own right.

The classic sporting-coupe elements are there: a long bonnet swooping up to a low cabin area that falls rapidly away to a short rear end. Think Jaguar E-Type and then add in Lexus’s world-class aerodynamic research facility in Japan and you’ll end up with something like the LC 500. Well, maybe.

There’s nothing retro about the LC 500 however. From the low-slung, wide-open spindle grill at the front, book-ended by the most outrageous front light clusters you’ve ever seen, through the floating roof line that barely gives a nod to space for a side-window before falling smoothly away to that stubby back end. From any angle the LC 500 demands your attention. Looking along the flanks you’re struck by those low air-intakes forward of the rear wheels which are designed to smooth out the airflow over the rear wheels. They’re reminiscent of cooling intakes on mid-engined supercars and certainly add to the drama; as do the rear arches themselves which are wonderfully rounded and appear to be splayed out further than the rest of the car – especially when viewed from the driver’s seat, through the wing-mirrors.

But it’s the rear of the car that is, arguably, the most outrageous view of all with tail lights that have been inspired by the afterburners of jet fighters. It’s very bold and a million miles away from anything Lexus – or most other manufacturers for that matter – have ever done before. The LC comes with 20in alloy wheels, a glass, panoramic roof and Semi-Aniline Leather upholstery, while the Sport Pack gets 21in alloys, a carbon-fibre roof and Alcantara/Leather upholstery. Move up to the Sport+ Pack and you also get some driving dynamics upgrades in the form of Variable Gear Ratio Steering, 4-Wheel Active Steering, a Torsen Limited Slip Differential and a Retractable Rear Spoiler. Flicking open the flush-fitting door handle and dropping into the LC 500h’s Alcantara Sports Seat won’t cause you a problem as although the LC 500 is low, the large doors open nice and wide and there is plenty of room to swing a leg in first.

Once in you’ll find the interior lives up to the promise of the exterior and, depending on which trim level you choose, you’ll be surrounded by stitched Semi-Analine leather or leather and drape-effect Alcantara. The driving position, just like the fit and finish of the interior, is absolutely spot-on for a GT with your heels being just slightly lower than your backside. The 8-way adjustable sport seat and adjustable steering column meant that even my 6ft. 5in. mate could get comfortable – although anyone sat behind him would need to remove their legs first . . .

However, let’s not forget this is a 2+2 sports coupe and in the real world you’ll only ever use those rear seats for extra luggage/shopping space. If you really have to put a couple of people back there then make sure you aren’t travelling very far as headroom is very restricted and legroom is virtually non-existent. No such problems up-front though – You and your passenger will have plenty of headroom, leg room and elbow room as well as wonderfully tactile materials to admire and some impressive tech to play around with.

The attention to detail is a joy to behold, from the classy analogue clock to the digital central instrument cluster – lifted straight from the LFA supercar – which has a precision-machined ring that, with the touch of a button on the steering wheel, will move aside, allowing you to view trip data or playlists. The dash itself and the multi-function steering wheel may appear to be a little button-heavy but those buttons work wonderfully well and the quality of materials used is beyond reproach. It’s only the infuriating touch-pad interface for the infotainment screen that gets a thumbs-down.

Any minor gripes are forgotten about the moment you silently glide away in EV mode – and are then totally wiped from memory the moment you put your foot down on the open road – this thing really shifts.

It’s not a face-warping, hold-on-for-dear-life sort of experience when the LC 500h accelerates. Rather than simply hurling you toward the horizon, the LC 500h pushes you there very quickly while all the time letting you know exactly what it is doing. You still have the same stupid smile on your face because the power builds so quickly with hardly any hint of a gear-change – but you still feel very much in control as the power is so linear. Also, while the taught chassis and sports-damped suspension certainly feel firm there is no hint of a bobbly ride or any “skipping” around faster bends which inspires huge confidence.

The Lexus engineers talk about the rhythm you can build up between corners in the LC 500 and I can see where they are coming from. It can certainly become addictive – especially if you flick the car into Sport+ mode and use the titanium paddle-shifters. The steering is as good as anything I have driven before (and I was driving a McLaren 570S the week before) giving plenty of feedback and allowing you to precisely place the car where you want it before powering out of the corner and onto the next one. The sound from the V6 doesn’t disappoint either but you’ll need to have the windows down to make the most of it as the Lexus is very well insulated – better still seek out a long tunnel to take a blast in.

In its natural habitat, cruising along the motorway, the LC 500h is hard to fault. It’s quiet for a start – even with 21in run-flat tyres you barely hear any road noise and there is virtually nothing from the wing-mirrors. The V6 settles down to a low hum and I didn’t notice any whine from the CVT gearbox, which goes to show how improved this new hybrid system is. Make no mistake, the LC 500, whether in V8 or hybrid guise, is a huge statement from Lexus. For a manufacturer to take a concept car and turn it into a reality with virtually no compromise is unheard of. The engineering challenges will have been immense simply to get the car to meet universal regulations but Akio Toyoda, Toyota’s Chief Executive, had a vision to turn their premium brand into something that was not only luxurious and cutting-edge but would also thrill at the same time. This is what he demanded of his engineers and designers when it came to the LC 500.

They certainly haven’t let him down.