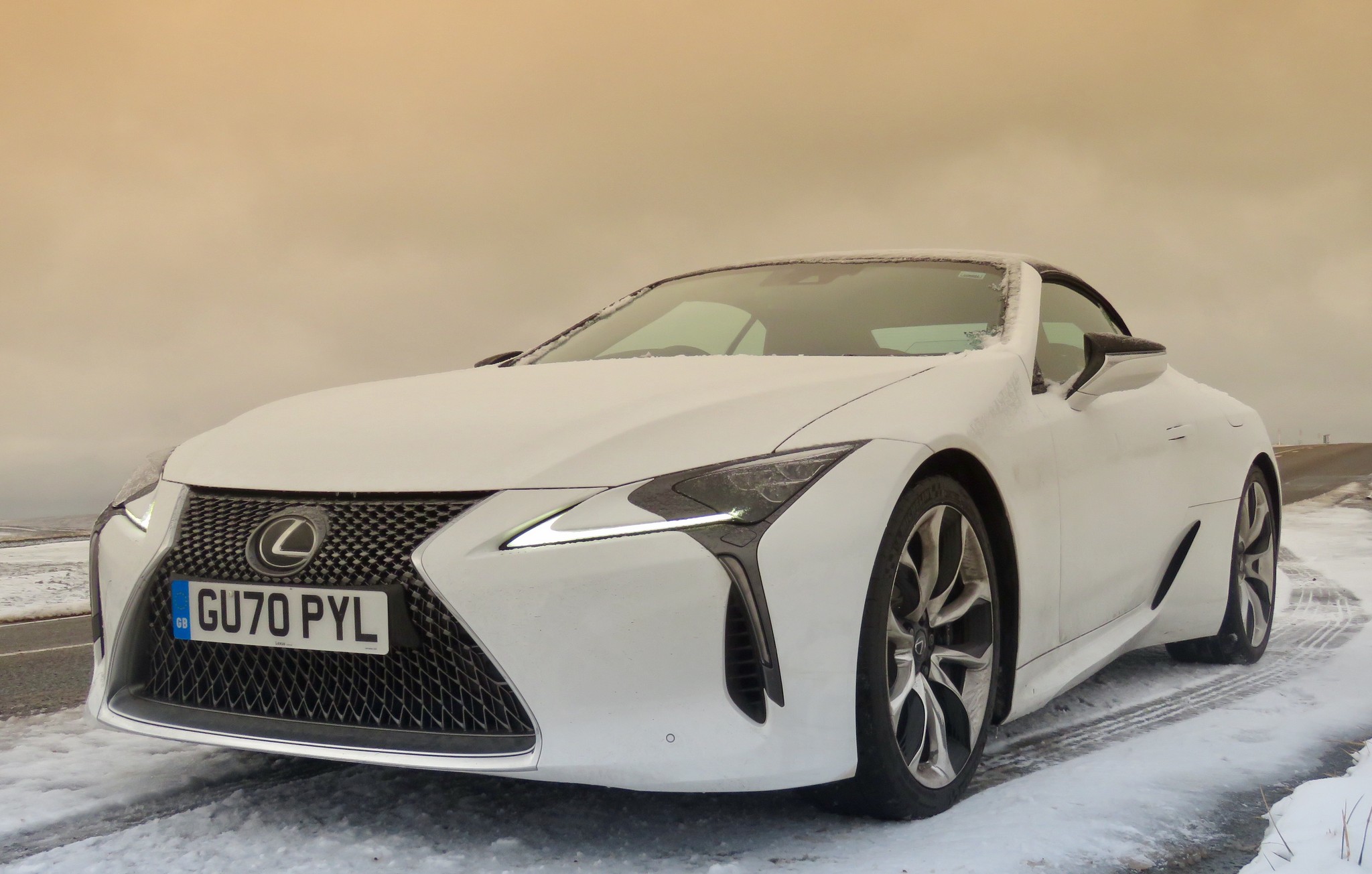 THE Lexus LC500 C is one of those cars that gets you to thinking “Why do I not see more of these on the road?” After all, it’s stunning to look at and quite unlike any other 2-door convertible coupe out there.

The rear wheel arches are so flared they almost appear separate from the rest of the body, the front grille is so wide it looks menacing enough to make an appearance in the latest Batman movie and those sharp, stylised tail lights deliberately take their cue straight from the after-burners of a jet fighter.

What’s not to like? Well, the price of £92,425 will be enough to stop many people in their tracks – my model is the even more expensive Sport Plus which takes the price to £98,275.

And herein lies the rub – Lexus’s other coupe, the RC F, can be yours for a mere £64,550 and it still manages to turn heads. It’s more practical too.

But if you want exclusivity as well as looks from your performance coupe then the LC 500 C is an absolute no-brainer.

Be prepared for admiring glances by the bucketful and an end to getting away from filling stations quickly; people will stop you and they will ask many questions. No one will have a bad word to say about the LC 500 C, it will be wide-eyed  admiration all the way.

I was unlucky enough to take the LC 500 C during the Beast from the East (2) storm in February, however it did give me the opportunity to find out if the substantial amount of snow that had fallen on the Peak District could tame the V8-powered Lexus and turn it into a timid, tip-toeing kitten . . .

Now, anyone with common sense will know that 5-litres, 8-cylinders, 457 bhp and rear-wheel drive cannot be expected to play nicely with Mr. Frosty.

In ideal conditions the LC 500 C is a well-balanced, grippy animal that will lap up the laps and eat through the miles without so much of a twitch – and even if the weather turns nasty the LC 500 C has enough in its arsenal to keep everyone toasty and safe.

But snow and ice? Really? Surely that is the domain of all-wheel-drive, preferably on winter tyres. (Thinks: Hmm, a suitably-clad Yaris GR could be a lot of fun. . .)

However, the LC 500 C isn’t just a fair-weather, top down, attention-grabbing way to arrive at the Opera House. It’s also well equipped for colder weather with powerful climate-control, heated front seats and a heated steering wheel.

And because you’ll want to go topless at every opportunity, it even has neck-warmers in the headrests.

Which is all well and good, but none of those things are going to prevent you from ending up in a field with a drystone wall in your lap if you don’t have some sort of traction control for when the white stuff comes down.

Well, the good news is that the Lexus LC 500 – including the Convertible – has its very own “Snow” setting which is activated from a rotary dial jutting out from the right-hand side of the instrument binnacle.

With a twist of this dial, the vehicle changes traction and stability control settings to make sure the power comes in much more gradually and gear-changes happen at lower revs.

So, with the torque-reducing Snow setting selected I set out on a 5-mile trip over the hills to visit the town of Buxton, in the heart of the Peak District.

With about 2 inches of snow covering large patches of the roads I anticipated some hairy moments but the LC 500 C was mostly well-behaved, although caution was needed just as in any other car.

With the soft-top iced up I didn’t dare attempt to take the roof down, although Lexus assure me it wouldn’t have been a problem for the sophisticated mechanism – which is designed to work all year round.

At the highest point of the Goyt Valley, I pulled into a snowy lay-by and switched off snow assistance. I then tried to leave the lay-by. It wasn’t easy. The rear end scrabbled and fish-tailed with even gentle presses of the accelerator.

With snow mode engaged once more it was a different story with the Lexus pulling away without drama. Could I still invoke a tantrum from the rear-end? Absolutely, but it took a heavy right foot.

Sweeping corners were taken at reasonable speed with no sudden lightness to the steering and the 10-speed, direct-shift auto gearbox didn’t once get confused with what was expected.

Once in Buxton, I lowered the thawed roof and got out to take some photos – which took a while as I spent some time answering questions (at a distance) from curious locals about the Lexus.

No one had ever seen a LC 500 before, let alone the convertible. It was unanimous though; the LC 500 C is stunning inside and out.

It would be foolish to think this powerful, rear-wheel drive convertible is an ideal winter vehicle as it’s simply not what it was designed for. I found a couple of steep ascents invoked some wheelspin despite the clever electronics, but overall, the LC 500 C performed much better than expected with the snow setting proving to be a useful tool – Just don’t expect it to perform miracles.

The poor weather meant I never got to really push the LC 500 C so spent maybe longer than normal admiring the aesthetics of this remarkable machine.

The interior is no less impressive than the exterior with only the clunky infotainment interface spoiling the party – I’m beginning to wonder how long Lexus will persist with the track-pad method as it appears to be universally disliked and is the only weak-link in a chain of remarkably strong and stylish links.

Other than that, be prepared for lots of “Oohs” and “Aahs” when you nestle down into the cockpit of the LC 500 C. The feeling of opulence is right up there with the best. Fit and finish is very much in the “outstanding” category.

The sculpted front sport seats not only look fantastic, they hug you like a post-Covid parent. The result of more than 50-prototypes that Lexus tried before settling on this design.

Looking around the cabin you’ll find lots of design cues from sweeping lines in the door leather to intricate repeated patterns on the dash front and above the door cards. Everywhere you look you see that attention to detail has been taken to another level.

It all feels great to the touch too. The aluminium gear-change paddles are of a good size, the steering wheel is chunky and moves up and toward you automatically when you first sit down.

The large infotainment screen looks sharp and the large, chromed on/off button which also doubles as the volume control is a welcome touch that makes some common tasks much easier while on the move.

Even the main dials have a party trick in that the main bezel – which is physical, not virtual- slides to the right or left depending on how much extra info/data you wish to view. It’s slick and impressive which just about sums up the LC 500 C to a tee.

An absolute stunner, made to be enjoyed (by those who can afford it).