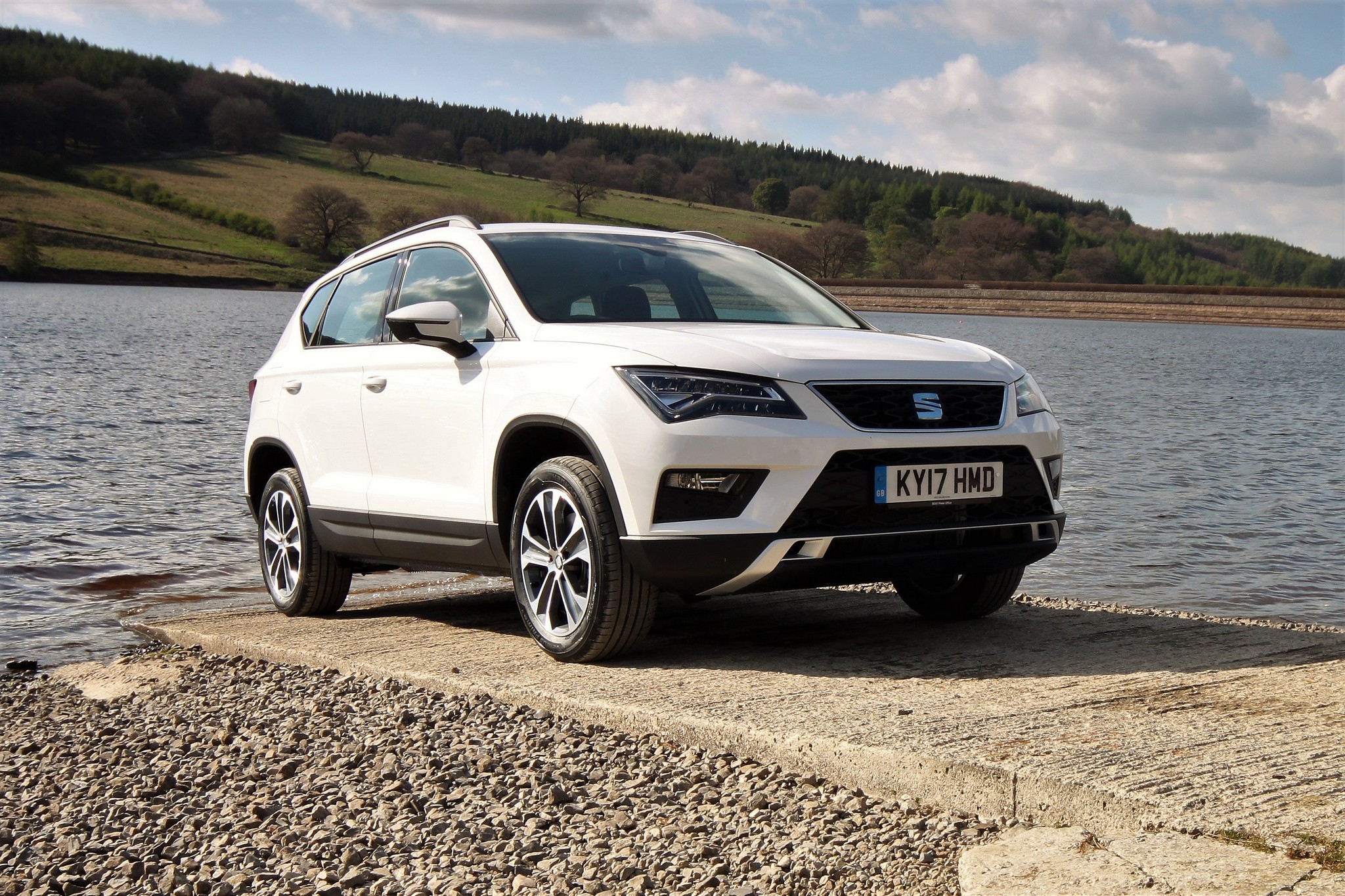 SEAT’s new Ateca SUV is practical, stylish and great to drive – even with just 3-cylinders!

SEAT’s entry into the ever-burgeoning SUV market is the well-received Ateca – a squarish-looking crossover based on the Leon and going head-to-head with the likes of the Renault Kadjar, Nissan Qashqai and the “good-grief, there’s another one!” Kia Sportage.

Now, I say squarish not in a derogatory manner because the Ateca looks all the better for it. It looks fresh and the lines are clean, unhampered by the curvaceousness of other marques that tend to leave them looking “over-complicated”. All Atecas are 5-door, 5-seaters with 4-wheel-drive only available on the more upmarket models. However, no matter how impressive that may sound you won’t be wanting the poverty-spec model so let’s take a look at the model I’ve been driving around in for a week – The SE which starts at a very reasonable £20,285.

I’ll start by acknowledging the elephant in the room – that tiny 3-cylinder 1.0 litre TSI engine. In an SUV? Really?

Yes, really. The 1.0 litre Ecomotive unit puts out 115PS, is capable of a combined 54.3mpg and emits just 119 grams of CO2 for every kilometre. It will accelerate you to 60mph in 11 secs and go on to 114mph. I found it met all my needs in the week I had it and that included a trip out with all 5 seats full and some light luggage. So, would I go for the 1.0 TSI if it were my money? Probably not – unless virtually all my driving was around town. Instead, I’d opt for the 1.4 EcoTSI which manages virtually identical mpg figures and emissions. It costs an extra £1,425 but that extra oomph combined with more refined motorway cruising and peace of mind if needing to tow would make the extra cost worthwhile.

The SE model also adds 17in alloys, electric heated and folding door mirrors, LED taillights, black roof rails and front fog lights with cornering function as well as rear parking sensors. Inside there is ambient lighting, lumbar adjustment on both front seats, chrome dashboard detailing, cruise control, dual-zone climate control and the 8in. colour touchscreen Media System Plus with integrated voice control, Full Link (Apple CarPlay and Android Auto capable) and eight speakers. If you want sat nav you’ll need to spend a further £550 or step up to the SE Technology model which starts at £22,020.

The interior of the Ateca SE isn’t going to get your pulse racing and even the £24,800 top-spec Xcellence fails to Xcite but it does have a feeling of spaciousness that may not be apparent from the outside. The interior itself is lifted straight from the SEAT Leon which means it is functional and well thought-out with a particularly good driving position. The grey cloth, edged in blue fabric on my car looked rather smart and felt like it would be hard-wearing enough to cope with family life. Rear passengers fare well because the Ateca is a tall vehicle and the roofline does not slope much towards the rear like it does in some rivals. This gives even 6-footers adequate head room. Leg room is fine, being no worse than in the Nissan Qashqai or Kia Sportage. The central passenger, however, has to contend with a transmission tunnel that makes foot-placement a little awkward and you wouldn’t want to be an adult travelling very far in this seat.

The large boot is another reason why people are turning to SUVs and the SEAT’s boot is among the best in class with 510 litres – reduced to 485 litres if you specify 4WD but still more than the Qashqai and Renault Kadjar. The rear seats can be handily dropped from a couple of pull-levers in the boot and that will give you 1,604 litres in the 2WD. The seats don’t fold entirely flat though so sliding in longer objects can be a little awkward.

If the SEAT Ateca isn’t going to win you over entirely on its design features then taking it for a drive may seal the deal because it’s just so much more fun than its rivals when you show it an open A-road. Even with the 3-cylinder engine the Ateca felt like a capable hatchback around corners rather than a lumbering, over-spring SUV. Body-roll is very well contained with the steering giving enough feedback to allow the driver to engage and enjoy the whole experience rather than worry about carrying too much entry speed into tighter bends. The Ateca feels refined on the motorway too – cruising in 6th gear was quiet enough at 70mph although a little more push for overtakes would have been welcome. If this is your regular type of drive then the 2.0 diesel would be ideal – and you could expect up to 60mpg.

A sportier ride is what SEAT has always been about though and of course this means that the Ateca does sacrifice some ride comfort when it comes to bumpier surfaces – but not much and certainly not enough to make it a deal-breaker as the overall package is such great value without sacrificing driving enjoyment.

All Photos by Tony Whittle Photography