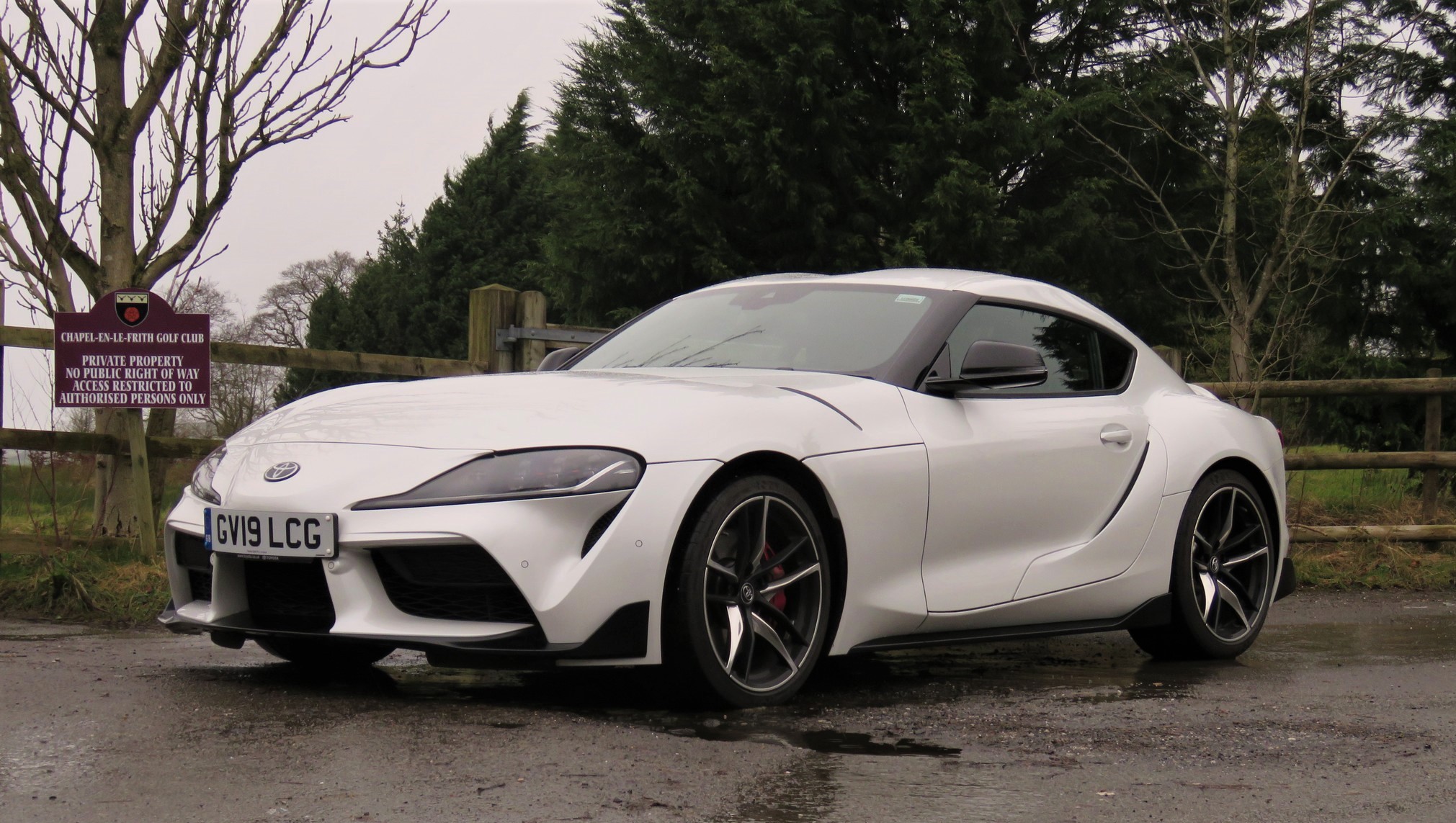 And so what if a certain German car manufacturer has had more than a hand in creating this piece of motoring heaven? I say ‘get over it’. The new Supra wouldn’t even exist if it weren’t for BMW agreeing a deal with Toyota. Just like there wouldn’t be a GT86 if Toyota hadn’t partnered with Subaru – and that’s one of the best-driving sports coupes you’ll find for the money.

Sure, the engine, gearbox, interior and much of the chassis has been lifted straight from the new BMW Z4 but, hey, if you’re gonna borrow someone else’s tools why not borrow the best?

And the 3-litre, flat-six engine is an absolute peach, as is the 8-speed ZF gearbox.

335 bhp, 0-62 in 4.3 seconds, a top speed of 155 mph and enough torque to reshape your skull under hard acceleration? What’s not to like? Let’s face it, if Toyota had gone their own way (which would have meant huge expense in building a new engine factory) would it be any better? I doubt it.

Ok, the interior could, perhaps, do with a few more buttons and toggles that are hard to reach or simply have no logic in their placement but if I was spending my own £54,000 on a Toyota GR Supra Pro then I want things accessible, tactile and working. Which it is.

The good news for all 1980s Supra fan-boys is that Toyota have done their bit very well indeed. The car looks fantastic from every angle and you instantly tune-out all the fake air-vents. Of which there are many. It just doesn’t matter. The Supra is a feast for the eyes in any colour – although Lightening Yellow is my personal favourite.

And it’s not just the bodywork that Toyota have nailed; they’ve tuned the engine, damping and chassis independent of the Germans and I think they’ve beaten them at their own game. Drive the Supra and the similarly-engined Z4 back-to-back and you’ll be astonished at just how much better the Toyota rides.

I don’t know what deal with Beelzebub himself the spanner-monkeys at Gazoo Racing have made but the Supra is just a joy to be sat in whether you’re blasting along a B-road or cruising on the motorway. It feels so refined with no jarring even over pot-holed surfaces. It simply gives a little thud over the worst imperfections and while you wait for that to be transferred to a jolt through your body, it simply doesn’t happen. In contrast, you’d probably be rolling your eyes at the local council in the Z4, which is altogether more skittish.

You could easily live with the Toyota Supra on a daily basis; it’s such an easy car to drive. Placid when you want it to be around town and a total beast when you slip it into Sport mode.

The steering is perfectly weighted for enjoyment – which means it’s noticeably heavier at lower speeds and during parking manoeuvres – but never unwieldly. Turn-in is crisp and precise so darting along the Sheffield road out of Castleton was an absolute blast for me recently as the road snakes along with a series sweeping bends that still afford good visibility ahead. The Supra danced through each one with ease and never felt like it was at any kind of limit – for grip or enjoyment. It’s the sort of car that makes you want to immediately turn around and do it all again.

The amount of grip is phenomenal with just the slightest hint of understeer when you get silly, which is easily corrected as the car is always letting you know just what’s happening – and the brakes are superb.

All this enjoyment is accompanied by a belter of a soundtrack from the flat-six engine which growls on the upshifts and pops on the downshifts. I gave the flappy-paddle gear-shifters a go in an attempt to wring even more enjoyment out of the car and its sound but ultimately found it more distracting than involving. The ZF gearbox is so good, shifting manually is a bit like choosing chopsticks over a knife and fork when you’re starving.

Was there anything I didn’t like about the new Toyota Supra? Let me think . . . Oh, the steering wheel could look a little more upmarket and I wasn’t sure about the clear space behind the seats that leads straight into the boot area. No bulkhead. Strange, but I suppose it cuts down on weight. Just don’t put anything in the boot that you don’t want flying past you when you brake hard.

And the boot is surprisingly spacious. Easily enough room for a couple of medium sized suitcases, so touring holidays won’t be a problem then.

Other comforts include an excellent infotainment system – BMW sourced, of course – which includes Apple CarPlay along with sat nav, DAB radio and a premium sound system which sounds great at any speed. However, chances are you’ll be listening to the engine as soon as you hit some open road – even if it is German. No worries though, rest assured this is a belter of a sports car – the legend has evolved and is now better than ever.