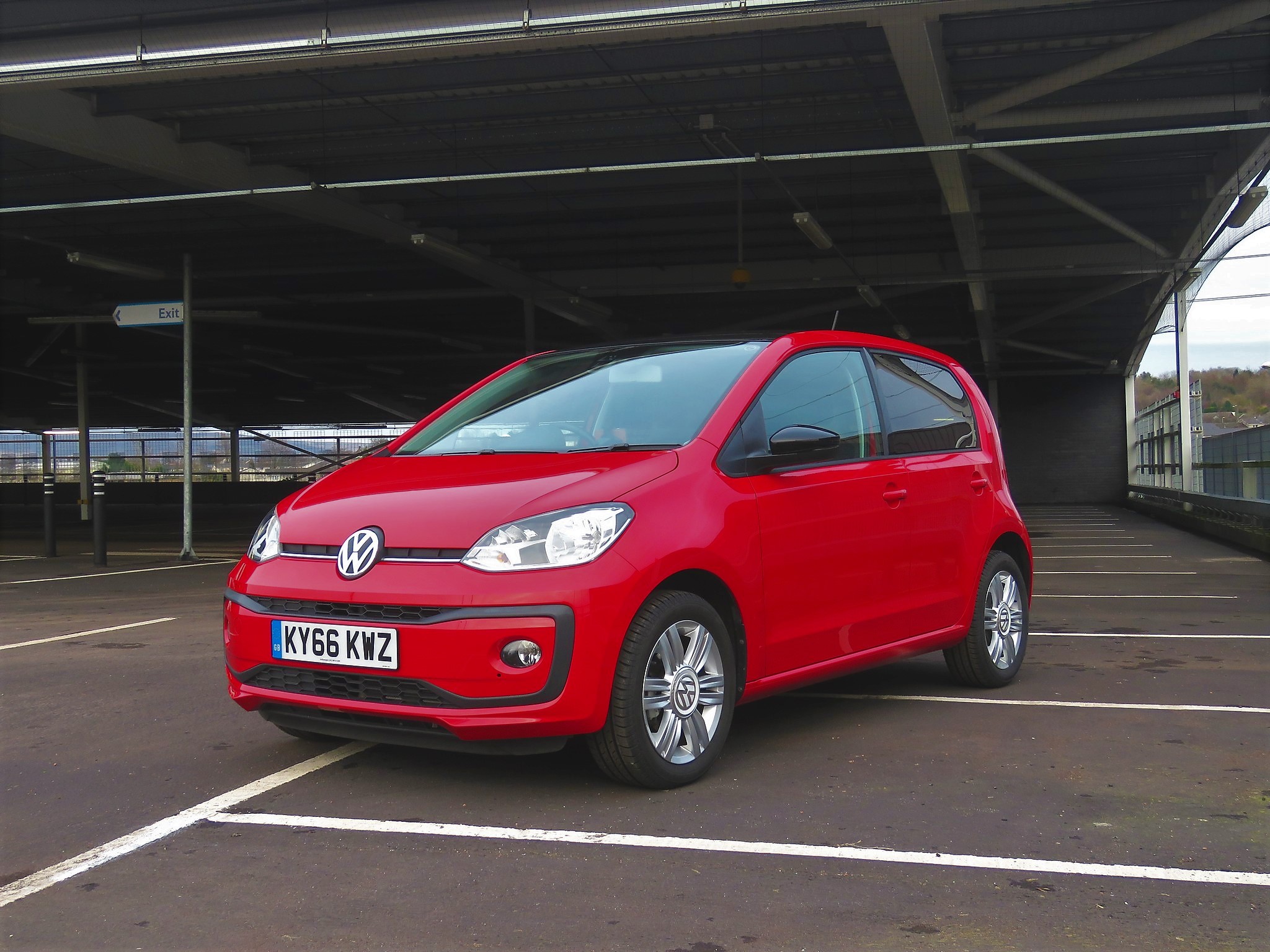 UPDATED in 2016, the Volkswagen up! is a boxy-looking but surprisingly spacious city car that has won many fans since its launch here in the UK in 2012 and has won several best-in-class awards beating such rivals as the Citroen C1, Toyota Aygo and Peugeot 108 as well as finding favour against the likes of the Kia Picanto and Hyundai i10.

Available in either 3-door or 5-door guise, the VW up! has just 1 engine choice – the excellent 999cc, 3-cylinder petrol unit that is also fitted to its stable mates: the SEAT Mii and the Skoda Citigo. But while the SEAT and Skoda offer only 2 outputs – 59bhp and 74bhp – the VW up! can also be optioned with the turbo TSi version, giving 89bhp. For us northerners there is also the e-up! although taking another glance at the brochure this is the electric version and not a regional marketing ploy.

As is the way with many of the city cars which are aimed at the younger end of the market there is a plethora of options to customise your up! including 13 body colours, 8 door mirror colours, 3 roof colours, 7 alloy wheel colours, 7 side decal colours and 9 upper dashpad colours.

My bright red High up! came with 15in alloy wheels, a black roof and matching wing mirrors which I must say looked rather good even without side decals. The wing mirrors now house the side indicators and the front and rear bumpers have been updated as have the LED daytime running lights which are part of the halogen clear headlight cluster. Front fog lights are standard on the High up! but optional on the Move up! and up! Beats – for which you will have to specify the Winter Pack option as individual options aren’t available.

Electric windows are standard throughout the range as is remote central locking but if you want air-con you’ll need to move up the range.

Inside the up! is now almost as customisable as the exterior with a choice of seat colours and dashpad. The new multi-function leather-covered steering wheel is lifted straight from the Golf and feels like a quality piece of kit as does the gearstick and other switch gear. It may not be a sea of soft-touch material in the cabin but it genuinely feels like a class above its rivals and the inclusion of some piano-black trim finish on the steering wheel and centre console, along with touches of chrome surrounding the main dials and air-vents lifts the cabin above what you might expect at this price level.

On the tech front, VW have done away with the detachable infotainment screen of the previous model and now introduced a very clever “use your own phone” solution which sees iPhone and Android Phone users able to download an app called “Maps+More” and then place their phone in the dash-top cradle provided. Plug your phone into the USB slot behind the cradle and you can enjoy Tom Tom Sat Nav, access to your music and address book or the “Think Blue” trainer to help you drive more efficiently. The seats are comfortable (and heated on the High up!), if a little firm and a good driving position is easy to find despite the steering wheel having no rake/reach adjustment. Visibility is very good all around thanks to the tallish profile of the up!

That tall profile, with very little slope to the roof-line, also means that there is a good amount of head room for rear passengers. There is certainly more than in the Aygo/108/C1 but maybe not quite so much headroom as in the Hyundai i10. It certainly makes getting in and out of the rear seats easier too.

Once in there you’ll find adequate knee room for all but the tallest of passengers but remember the up! is strictly a 4-seater only. There is no central lap-belt for a third passenger.

Boot storage is, again, good for a city car at 251 litres with the rear seats up and 959 with them folded. There is also a boot panel that can be raised to make loading and unloading easier or left in its lower position to maximise boot space – a nifty idea that adds to the flexibility of this little car. Out on the road the Volkswagen up! really shows how a small city car should behave with impeccable manners around town. The steering is lovely and light but transmits enough feedback to stop vagueness becoming a problem while the clutch and gears are smooth enough to let you drive around the city all day without breaking a sweat. That sweet 3-cyclinder engine may sound a little gruff when setting off but it soon settles to a whisper and stays there pretty much all the time.

Take the up! out onto the twisties and you’ll soon find its dynamic limits but not as quickly as you would in the likes of the Aygo, i10 or the Kia Picanto which all suffer from more pronounced body roll. The up! certainly feels stiffer sprung than rivals making it more fun to drive quickly but it does tend to “hop” a little if you hit a bad patch of road. The 74bhp engine feels quick enough to cope with motorways although you will have to plan any overtakes carefully. The TSI engine would, obviously, be the best choice for those regularly travelling greater distances, but for your average city car user the 74bhp unit will be easily up to the job.

Having the VW badge means paying a little more than you would for the almost identical SEAT Mii or Skoda Citigo but in High up! spec this is a premium-feel city car so why not go for the premium badge too? You won’t be disappointed.