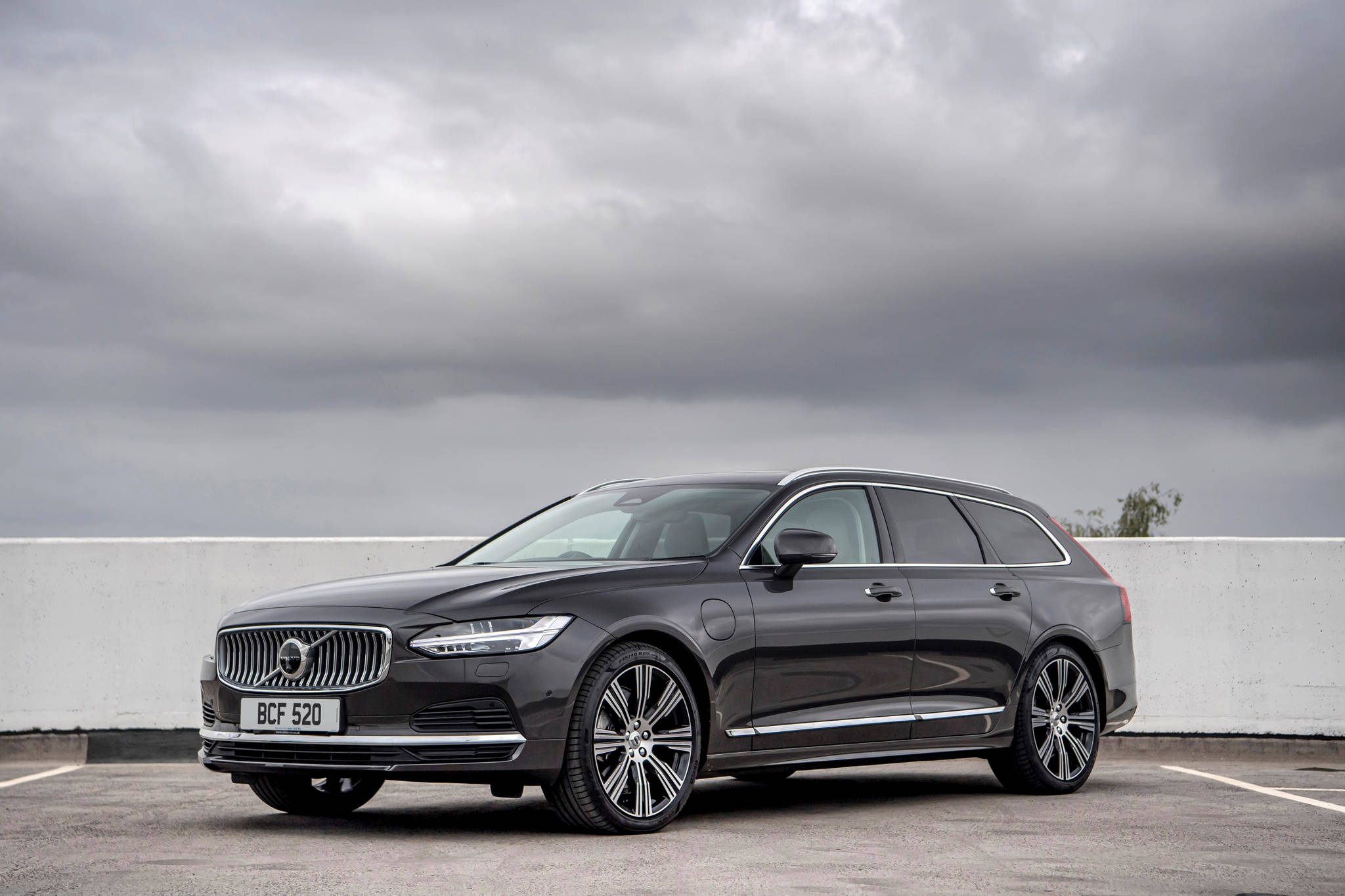 YOU’VE just got to love an estate car, right? Especially a Volvo Estate. Who can forget those 850 Estates thundering into the BTCC back in 1994? Awesome – in a “that shouldn’t really work” kinda way.

But although competitive, the 850 Estate never won a race. However, it instantly became a much-loved icon and fast Volvo estates have been cool ever since.

Now, although the latest Volvo V90 T6 Recharge may not be quite as suitable for a weekend at Knockhill, it still has bags of driver appeal and a 0-60 mph time of just 5.2 seconds means it’s still capable of delivering the thrills.

Powered by a combination of a 2.0-litre petrol engine and electric motor (giving you a total of 350 bhp), this all-wheel-drive plug-in hybrid looks way cooler than the hearse-like 850 of the 90s.

Sleek and sexy with a sloping roof line, the V90 oozes class whichever angle you view it from and when you step inside there is no disappointment to be had, whatsoever. The cabin is spacious both for front and rear passengers, while the load-space should be more than enough for a family of four on holiday – or a sales-rep with a shed-full of samples.

Also available in a pure petrol or diesel guise, the Volvo V90 starts at £42,045 (OTR) for the front-wheel drive Momentum model that boasts a 197 bhp petrol unit and rises to £58,425 for the all-singing, all-dancing Recharge T6 Inscription model. All V90s come with an automatic gearbox as standard.

Pick of the diesel models would be the FWD R-Design model which gives 197 bhp and 420Nm of torque for £46,385 OTR. It’s WLTP combined consumption figures are between 45 and 50mpg which slightly trumps the Recharge hybrid model which is considerably more expensive at £57,525 for the R-Design model. However, make full use of the hybrid’s 54-mile pure electric range and you’ll be able to claw some of that cash back while helping the environment and missing out on any congestion-charges. The lowly 7% Benefit-in-Kind figure is also much better than the diesel model which carries a 33% charge.

A “farmer’s favourite” Cross Country version of the V90 is also available with a slightly raised ride height and some extra trim to add to the ruggedness. There’s no hybrid version though, and both petrol and diesel variants are AWD only.

After spending the week with a T6 Recharge model in R-Design trim, I think I would be sorely tempted to spend the extra cash, take up Volvo’s offer of a home-charging unit and enjoy the majority of my daily motoring in serene, EV-mode luxury. It’s like being sat in your favourite armchair which can also whisk you silently away to anywhere you wish. Of course, being a hybrid, the Recharge means there is no range-anxiety when it comes to travelling further afield – and with the overall refinement of the V90 being so high, you don’t unduly notice the extra noise; especially on the motorway where you could travel all-day and still arrive fresh.

The only time the V90 Recharge gets a little vocal is on hard acceleration where the auto box can seem a little on the slow side to shift up. However, in normal, everyday driving you’ll hardly notice any extraneous noise at all.

The 2022 version of the V90 now also comes with Google Assistant to make life even easier. “Hey, Google” is now all it takes to make calls, find destinations for the sat nav, change the temperature and even control your connected devices at home. It’s all clever stuff and I found it to work really well (even with my strong northern accent) meaning less time with eyes off the road or hands off the wheel. On a particularly cold day in Dundee, I complained that my hands and backside were cold, and Google politely informed me that the heated seat and steering wheel were now on. And yes, there is a pre-conditioning function for those frosty mornings.

The Volvo V90 T6 Recharge is certainly a car that is easy to live with, and if you need tons of space for family or business it is a superb alternative to some of the larger SUVs that litter our roads.

It is certainly more satisfying to drive than most large SUVs. The V90 disguises its size very well when you are behind the wheel and B-road blasts reveal a genuine ability in this large estate’s chassis, suspension and steering. Of course, the AWD also helps here. It might not be quite as exciting as an Audi RS6 Avant but you’ll get 60% of the thrills for 0% of the dental bills.

The 19in alloys on the R-Design don’t appear to spoil the ride and it’s only the extra weight of the batteries that you sometimes feel if you push the car particularly hard on the bends.

It would be unfair to tag the Volvo V90 T6 Recharge as a jack-of-all-trades as that would suggest it was master of none. It feels much closer to an excellent all-rounder. It has a useable EV range, refinement and space is excellent and driver satisfaction is particularly good – with the new Google Assistant raising ease-of-use a notch or two.

Is it worth the premium for the hybrid system? That will be down to the individual; but if your commute is around the UK average of 22 miles (with the occasional long-distance run) and you value refinement, build-quality and space, then the Volvo V90 T6 Recharge has to be on your shortlist.