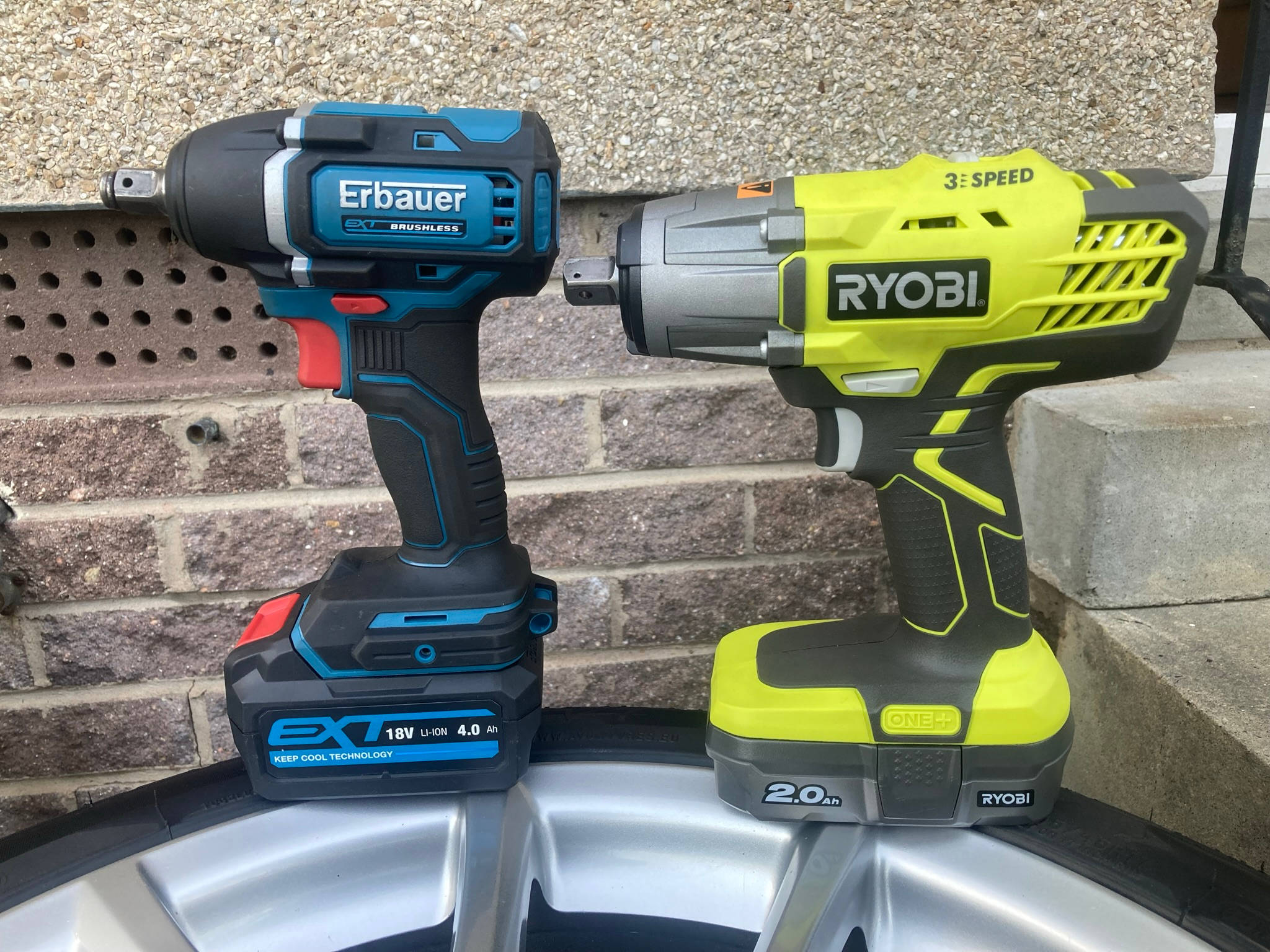 IF, like many motorists, you’ve struggled to remove a wheel because the wheel nuts feel as though they’ve been welded to the hub, then you’ve probably been a victim of “rattle-gun fever” at your local tyre-fitter.

Well, those rattle-guns – or Impact Wrenches – are now available to the home mechanic at a price that won’t break the bank and don’t require you to have an air-compressor chugging away in the corner.

A cordless impact wrench is particularly useful for not just removing wheels, but for many other jobs – particularly brakes and suspension dismantling where rusted-on nuts can mean hours of soaking in penetrating oil and then leaning on a 2ft. extension bar with the hope you won’t lose ALL the skin off your knuckles . . .

In fact, any stubborn nut or bolt will probably surrender to a decent impact wrench and while I’m not advocating you keep one secured in the car as part of your emergency kit (although there’s no reason not to) I think one of these reasonably-priced devices would quickly become invaluable to the keen home mechanic.

Both the Erbauer EIW18-LI and the Ryobi R18IW3-120S are 18V Cordless Impact Wrenches that use a brushless motor and Li-ion batteries. Maximum Torque-rating is 400Nm for the Ryobi and 240Nm for the Erbauer, which should be enough to shift the most stubborn of fastenings.

Both can be had for under £145 – including battery and charger – which makes these tools very affordable when compared to similar items from the likes of DeWalt, Makita and Milwaukee where you can easily pay between £300 and £400 for similar levels of power.

I’ve been using both devices side-by-side on a variety of jobs on my 2010 MX-5 and while they have different characteristics and features, I have found it impossible to declare a favourite. Either one would make the perfect Christmas gift for anyone who regularly services and maintains their own vehicle.

HALFORDS provide the Ryobi 18V ONE+ Impact Wrench Starter Kit for just £142.99 which features the model mentioned and comes with a 2.0Ah battery, charger, 3 impact sockets (to cover most wheel nut sizes), a 1/4in hex adapter and a canvas carrying bag. As with all Ryobi tools there is a 3-year warranty available and the ONE+ battery can be used in a wide variety of compatible Ryobi tools.

The Ryobi R18IW3-120S has 3-speed settings so you can select for either precision work, added control to avoid damage to fasteners, or full power for those seized nuts.

I found the variable-speed trigger to be very smooth in action and easily controllable so you’re not hitting full power as soon as you touch the trigger – the Erbauer’s trigger is nowhere near as smooth so more difficult to keep the revs down.

The Ryobi has 3 LED lights on the front housing that light up the working area nicely, no matter what angle you are using the wrench at.

The wrench is well-balanced in the hand and feels as solidly-built as it looks with soft-rubber for the grip areas. There’s an aluminium front housing surrounding the 1/2in square drive which features a locking pin for easy socket fitment.

SCREWFIX are distributors for the Erbauer EIW18-LI Impact Wrench which doesn’t come as a kit but can be had with a charger and 4.0Ah battery for just £134.97.

Although the Erbauer doesn’t come with a carrying bag or impact sockets, its 4.0Ah battery is twice the capacity of the Ryobi so full power should be available for more sustained periods.

The Erbauer EIW18-LI is only single-speed so getting used to that sensitive variable-speed trigger is a must, and like the Ryobi it has an electronic brake that makes it less likely you’ll do yourself an injury – or drop a nut into the dark depths of your car’s chassis.

There is a single LED work light and, like the Ryobi, feels well-made and on a par with more expensive models. It comes with a 2-year guarantee.

The impact wrench uses Erbauer’s EXT battery system and is also compatible with their EXT EliteCell units. Both battery types incorporate a “Keep Cool Technology” for longer life and usability.

Although Erbauer’s model is rated at 240Nm of torque, compared to the Ryobi’s 400Nm, it managed to remove rusty caliper bolts on my car with great ease and saved me an enormous amount of time.

The Ryobi also had no problem removing those bolts but it was a little more difficult to get the impact wrench in place as it is considerably longer, front to back, than the more compact Erbauer. This isn’t a problem if you have the car on a 2 or 4-post stand but, if like me, you usually work under your car while it sits on axle stands, then the smaller Erbauer comes into its own.

Swapping my MX-5 onto its winter wheels was an absolute doddle with the help of an impact wrench – but care must be taken not to overtighten the nuts and the use of a torque wrench for final adjustment is a must.

For anyone who enjoys working on vehicles at home (or at the trackside) then a cordless impact wrench is a great time (and knuckle) saver. Whether you’re simply changing a wheel or restoring a classic car, you’ll find yourself thinking “Why on earth did I not get one of these years ago?”

Both models featured here would make a brilliant Christmas present and there is very little to choose between them. The Ryobi is packaged with some extras and a decent carrying bag. It also offers better maximum torque at 400Nm and is easier to control with 3 speeds and a smoother trigger action.

However, the Erbauer is slightly more flexible thanks to its more compact dimensions. It is also a little cheaper but comes with twice the battery capacity of the Ryobi. Online reviews show that the Erbauer can punch well above its weight when tackling tough, rusted-on fittings; so, the lower torque rating of 240Nm shouldn’t be an issue for the DiYer.

Whichever you choose, a set of impact sockets is essential as the more common chrome-coloured sockets could disintegrate when used with an impact wrench. That’ll be the birthday present sorted too, then . . .