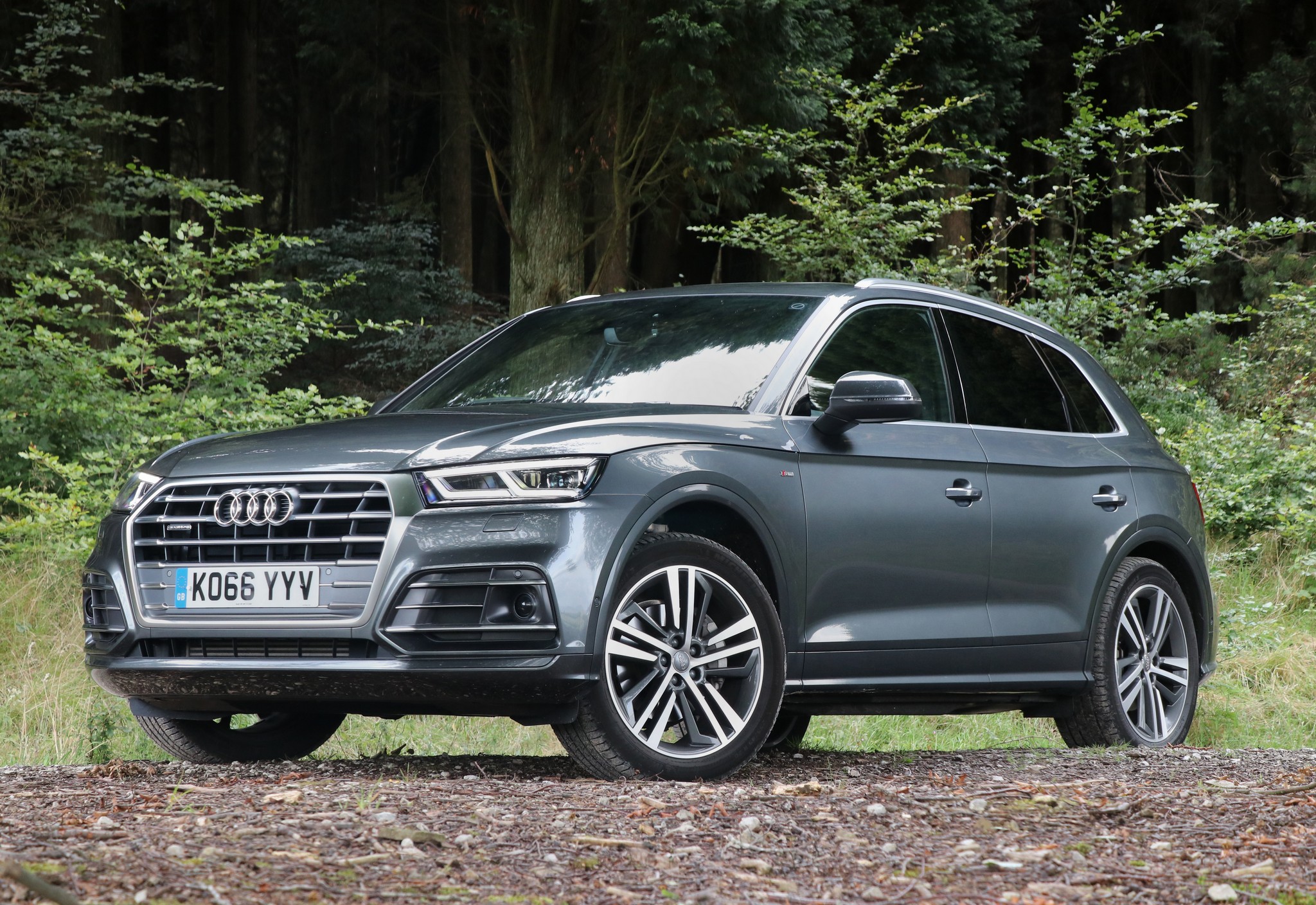 THE new Audi Q5, in true Audi fashion, doesn’t look a great deal different from the old Audi Q5 which I’m sure doesn’t worry the Audi accountants very much as the Q5 has always sold well for Audi.

It is different though – for a start it’s lighter than the older version by around 90kg, is a little more accommodating inside, has uprated engines and suspension and is now packed with more tech than before meaning you get better toys to play with – but again, in true Audi fashion, you’ll pay for them. Where you’ll really notice the difference is the interior which, like the new A4 model, is clean, functional and has a premium feel that rivals, like Mercedes and Jaguar, struggle to better. It’s solidly built and so easy to use you may wonder why all interiors are not designed this way.

All Q5 models – with the exception of the 3.0-litrre diesel and range-topping S Q5 – come with Quattro-on-demand which will instantly switch between 2-wheel drive and 4-wheel drive when needed and the 2-litre petrol and diesel models also come with a 7-speed automatic gearbox, so even in basic SE spec you’re already ahead of some of the competition. All photos by Tony Whittle You also get a 10-speaker sound system which includes a sub-woofer and 6-channel amp with a total output of 180 watts as well as Bluetooth, USB, Aux, SD card interfaces and a voice-control system.

Driver Assistance systems that come as standard include: Cruise Control with Speed Limiter, Parking Assist, Keyless Go, Pre-sense City which uses a front-facing camera to warn the driver of any imminent collision and can initiate emergency braking if needed. Impressively, there is also Hill Descent Control – although I can’t see the majority of Q5 users taking advantage of this. Step up to the Sport spec (from £39,135 OTR) and as well as some cosmetic enhancements to the exterior you’ll get front Sports Seats in twin leather with 4-way electric lumbar support, ambient lighting, MMI Navigation and a 3-month trial of the Audi Connect Infotainment Services which include 4G internet access, Google Earth and Google Street View, access to Google and Twitter, weather, news and travel information.

The S Line model (which I have been driving in its TFSI form) adds 19in wheels, LED headlights, S Line body enhancements such as front and rear bumpers, side air inlets and diffuser. There is also a rear spoiler and privacy glass. The sporty front seats are embossed with the “S” logo and come in leather with Alcantara inserts.

The steering wheel is badged and is also perforated, as is the gear-lever knob. There is also contrasting stitching on the seats, steering wheel and gear-lever gaiter while the pedals are in stainless steel. Prices are £41,085 for the diesel and £42,150 for the petrol. Then there is the stonkingly-quick SQ5 which instead has the 3.0-litre V6 TFSI petrol unit fitted, giving it 354 PS. It also has an 8-speed tiptronic gearbox and will set you back £51,200.

I reckon the diesel units will sell better than the petrol ones – although in today’s climate this is less certain – and the S Line will be the most popular trim level. Getting into the Q5 is very easy. The doors open very wide and it’s not too much of a step-up into the front seats. The same can be said for the rear seats too and it’s worth noting that the rear doors open wider than on some rivals, making getting a child-seat in and out much easier.

Once in you won’t be overly excited by the Q5’s interior – more quietly contented. It is a classy environment, there is no doubt about that, but to give it a wow-factor you really need the larger infotainment screen (which is standard on the the Sport and above) and if you budget an extra £250 for the Audi Virtual Cockpit you’ll have classy and techy all in one. The 12.3in. LCD Virtual Cockpit is very configurable and looks particularly impressive when using the full width to show your sat nav map. If you wish you can even have this showing the Google Earth view beneath shrunken Speedo and Tachometer dials if you wish. A quick push of a button and you’re back to the Classic View of prominent Speedo and Rev Counter with trip information, media info or other configurable telemetry in the centre.

It all works very well and is, thankfully, very intuitive – just like the infotainment system itself which is a doddle to work thanks to the large rotary wheel which sits just forward of the auto gear lever.  There is also a large touchpad within easy reach too which allows quick navigation between screens and can also be used to “write” on using your finger instead of navigating through the virtual keyboard (when inputting sat nav destination, for instance). I gave it a go but found it a bit gimmicky and soon resorted back to the virtual keyboard. No more shaky pokes at the screen whilst on the move, the Audi system is safe and accurate to use with great response times thanks to a fast processor. The fact that you can rest your wrist on the flattened gear-shifter whilst flicking through the menus makes things easier still. It’s very hard to think of a a better interface between driver and infotainment system, although the BMW iDrive system comes close.

The rest of the cabin is top notch when it comes to materials used and you won’t detect any cost-cutting in finish either. The Q5’s interior is built to last and while the Mercedes GLC may have a classier looking cabin, it can’t match the Audi for technical innovation and ease-of-use. I would say the quality of materials in the Audi was also slightly ahead of the Merc. In the rear, you’ll now find the Q5 has more knee room than the Mercedes and is about on-par with the spacious Jaguar F-Pace. Head room is good although more restricted for the centrally-seated passenger who will also have to contend with a transmission tunnel at their feet, which while a little awkward is not uncomfortable by any means. Rear passengers get their own climate controls too, which is a bonus.

Boot space is good at 550 litres (1,550 litres with the rear seats folded) although not as good as the Jaguar F-Pace’s 650 litres. However, it is a good shape with no awkward intrusions to frustrate you when loading larger objects. Okay, there is a lip to slide/lift objects over but it’s not very deep and those rear seats fold nice and flat. Out on the road I found the Audi Q5 TFSI to be just as quick as its 0-60 mph time of 6.3 seconds would suggest. With its AWD system and slick auto gearbox you can get away very quickly indeed without drama – even the 2.0-litre diesel unit will get you to 60 mph in under 8 seconds.

The car feels very well balanced indeed and the 20in wheels didn’t appear to unsettle the ride or cause any thumps through the chassis at all. Admittedly, my model came with the optional Adaptive Air Suspension (£2,000) which continuously adjusts the damping of all four wheels, electronically, and works in conjunction with the Audi Drive Select System to ensure correct ground clearance for the conditions. Levels of noise suppression in the cabin is impressive with the 2.0-litre petrol unit being very refined and even at motorway speeds the levels remain on the quiet side thanks to attention to detail, like Audi’s engineers moving the wingmirrors lower down on the doors to reduce wind-noise. It works on the new Audi A4 and it works here too.

The steering is surprisingly communicative, giving plenty of feedback and the brakes are very good indeed, having a firm but progressive feel to them that you and your passengers will appreciate. It may not look too inspiring from the outside and it hasn’t had a wow-factor make-over but no one can deny that the new Audi Q5 is probably the most appealing, mid-sized SUV out there. The Porsche Macan will certainly turn more heads but it will be at a price.

You get a lot for your money with the Audi but if you want more toys you can easily ramp up the price – my model came with a staggering £11,000 worth of extras, but looking through the list I could easily live without most of them and would only be tempted by the £900 20in alloys which look fab.

If you don’t get carried away with the long options list the new Audi Q5 takes some beating.