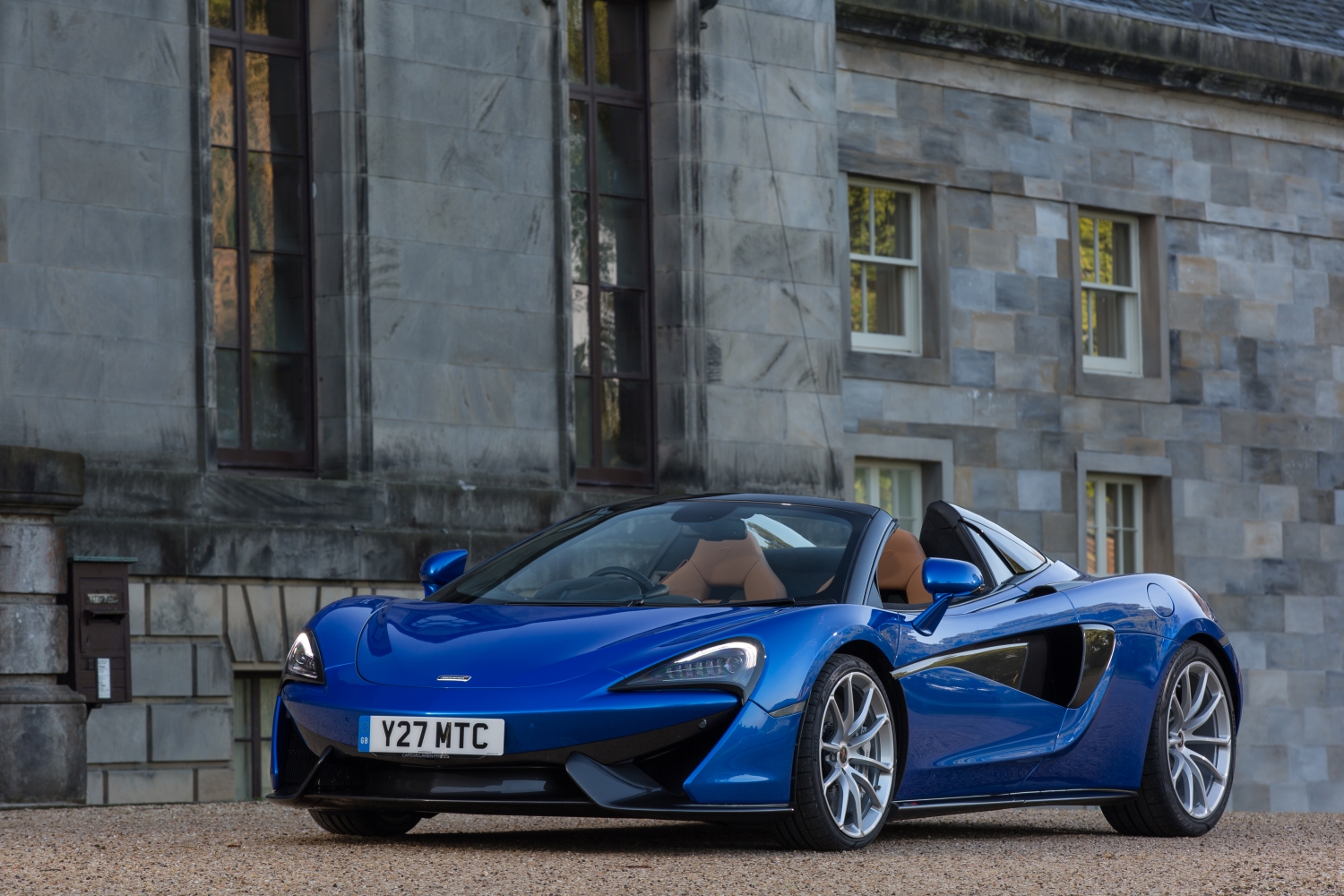 IF Bruce Wayne invited you down to Wayne Manor to test drive his new Batmobile you’d be crazy not to accept, right?

Okay, it’s never going to happen – on account of Batman not actually existing – but what actually did happen is that Wayne Bruce invited me down to Hoar Cross Hall in Burton-on-Trent to test drive the new McLaren 570S Spider. And that’s about as close as you can get; although the fact that McLaren’s PR Director is known to his colleagues as “Manbat” makes it even closer.

So, invite accepted I find myself at the beautiful Hoar Cross Hall Health Spa on a damp and muggy Tuesday morning in the middle of October – perhaps not the best weather for hooning around the local roads in a 562 bhp rear-wheel-drive supercar. And what a car it is. Sat in the grounds of the hotel with its signature dihedral-doors pointing toward the heavens it looks beyond spectacular in Vega Blue (a £3,650 optional “Elite” colour).

More shark-faced than a shark there is no mistaking this poster-boy for anything other than a McLaren and at first glance the Sports Series 570S Spider is difficult to tell apart from its more powerful sibling the Super Series McLaren 720S – which my car happens to be sitting alongside – but a wider, cheekier smile from the deep, front splitter and the lack of bonnet vents gives the game away. Side-on the difference is more obvious with the 570S Spider having deep, sweeping air channels cutting into the doors and leading to the huge intakes at the front of the rear panels – all finished in a contrasting Dark Palladium to match the front splitter, front air intakes, rear spoiler, rear diffuser and tonneau cover. My car also had the retractable hard-top finished in Dark Palladium at an extra cost of £2,190.

The view that most other motorists will get of the 570S – the rear – is really quite, well . . . evil. Those outermost elliptical light clusters are very dark and edged in a deep red that give the impression a malevolent cat is eyeing you up, while the twin, swooping blades of the rear buttresses rise up from the engine cover looking sharp and deadly – especially with the roof down and the tiny rear window retracted.

I have to say it really is quite menacing and astonishingly eye-catching. This is a car you could walk around and study for quite a while and yet still find angles you’ve missed or contours that lay hidden because the light wasn’t catching it at just the right angle.

The interior is also exactly what you would expect from McLaren – futuristic and very stylish with Alcantara and exposed carbon fibre everywhere you look.

My car came with the optional Luxury Design 6 (£2,570) consisting of natural Tan and Carbon Black leather with Carbon Black Alcantara inserts. The carbon fibre sill finishers are an extra £1,870. If you want more carbon fibre in there – steering wheel spokes, shift paddles, interior door inserts and transmission tunnel sides – you’ll be stumping up an extra £5,510. If you can do without the options you could find yourself behind the wheel of a McLaren 570S Spider for a mere £164,750 on the road. Okay, more than a V10-powered Audi R8 but I’m assured that there are PCP deals that work out no more expensive – and which would you rather own anyway; an Audi or a McLaren? One of those has a more exclusive ring to it and while the Audi R8 is an exceptional piece of kit the McLaren looks even better and has 100x the Kudos.

So, form a queue please . . . and be prepared to wait for around 2 years as all current McLaren 570S Spiders have found a home. Okay, time to get in and listen carefully to Mr. Bruce as he runs through some of the controls with me – crucially missing something out that would bite me in the bum later on . . .

First off, the seat and steering wheel adjustment is all powered, extensive and holds no surprises. It is very easy to get comfortable in this car – even getting in and out is aided by the fact that the McLaren designers have scooped out an area of the sill so you can easily swing your legs in and out without having to raise the heels of your feet too high. You sit very low in the carbon tub but the design of that sill and the fact that the door is up and out of the way really makes things simple. My granny could get in and out of this thing – if I had one. A granny that is. The seats themselves feel a little thin on first planting your backside but they never became uncomfortable on my 90-minute drive, they just held onto me really well and the fact that I can’t remember much about them means they were never an issue. Same goes for the driving position – absolutely spot on.

The 7-speed Seamless Shift Gearbox (SSG) couldn’t be any simpler to operate either – 3 push buttons low down in the centre console – Drive, Neutral and Reverse. The Active Dynamics Panel sits just above this allowing you to tailor the car for the conditions – or just because you feel the need for adrenalin. There are 3 settings, Normal, Sport or Track and you can adjust engine and throttle response separate from damping and grip levels if you wish. Usefully there is also a button for raising the nose a couple of centimetres so you don’t suffer the indignity of scraping over speed-bumps.

The roof can be raised or lowered in just 15 seconds at speeds of up to 25 mph and the small, rectangular rear window can also be lowered, even with the roof up, to allow those glorious V8 engine sounds into the cabin. After a quick explanation of the sat nav route that has been pre-programmed with way-points, a smiling Mr. Bruce tells me to enjoy myself and exits the car.

“Oh, I’m sure I will”, I’m thinking as I reach up to lower the surprisingly light door into place. A push on the brake pedal and a prod of the Start/Stop button brings the V8 to life and I’m pleasantly surprised by the sound – definitely meaty without being too “shouty” on start-up – unlike the Aston Martin Vantage S I drove earlier in the year which was a bit too show-off for me.

Pulling away I’m also pleasantly surprised by the visibility, which is very good indeed on account of the strength of that carbon fibre chassis which means the A-pillars don’t have to be chunky to add any rigidity to the car.

Remarkably, this Spider version has not had to have any rigidity added to make up for the (occasional) lack of roof. In fact, the only difference between the Spider and the 570S Coupe is an extra 46kg for the folding-roof mechanism – the performance figures and handling remain almost identical. Which, believe me, is no mean feat. The pre-programmed sat nav route takes in some lovely, quiet country roads and lanes with some dual-carriageway thrown in and some town driving too. I notice that the town of Uttoxeter is around the northern-most point and then I’ll be sweeping down again through some small villages and towns.

Clearly, I couldn’t be giving the McLaren the full beans as I value life and my licence too much but there were opportunities to experience just how quickly the 570S Spider gets up to speed – and I can confirm that it is very quickly indeed. If you’re sat below 3,000 rpm there is a miniscule delay for the turbos to spin up before the car leaps forward but generally, even in fully automatic mode, this thing flies.

It is most definitely not brutal though; and by that I mean you always feel in control of the car. It isn’t out to show-up your lack of driving skills or to make you feel foolish in any way. It always remains your friend. Even in Sport Mode there were no signs of the car getting jittery; and okay, due to public road restrictions I could only scratch the performance surface of the 570S but I could still throw the car around some pretty tight bends at speeds you wouldn’t attempt in a well-sorted hot hatch and the 570S was nowhere near its limit.

Body roll is virtually non-existent and the steering is exceptional with masses of feedback through the front wheels. I don’t think I have ever driven a car that you can place so precisely on the road and point at bends with such precision and confidence.

How it also manages to ride road-imperfections so well, I have no idea. Maybe there is some kind of anti-gravity device in the suspension that McLaren aren’t letting on about but what I do know is that you needn’t fear extra visits to your dentist. I was having so much fun I forgot to check the ins and outs of the Infotainment screen or the climate control. All I can say is that the floating, large portrait screen looks great and I was never too cold – even with the roof down.

In the towns and villages the McLaren was as easy to drive as a VW Golf. I kid you not, this is a car you could easily live with every day – there is even a decent sized luggage space beneath the bonnet. Well, enough for a weekend away anyway.

I was lucky enough with the weather to be able to have the roof down for most of the time and I found that noise levels within the cabin were more than bearable, even at 70mph. Nothing like the cacophony of noise I experienced in the Alfa Romeo 4C recently. With the roof up you wouldn’t know the 570S Spider was a convertible at all and I really can’t imagine the Coupe version being much quieter. You could easily hold a conversation in there but, personally, I’d be tempted to drop the rear window and let the sound of that V8 in anyway – it sounds terrific without ever getting stupidly loud; and that’s with the optional sports exhaust fitted.

People love to see this car on the road too. I got a few waves and a thumbs-up from a road-worker who was clearly more impressed than his workmates who just stared as I went past. Maybe it’s because of the looks alone or maybe it’s also because some people recognise it as a McLaren which is British designed and built in Woking. I like to think the thumbs-up involved some pride.

All too quickly my time came to an end in the McLaren 570S Spider – but that was not before I had gotten out to take a few photos and promptly managed to lock myself out of the car. Whoops. I had the key on me but a prod of the button only flashed the lights, the door still didn’t move. A search for a door handle proved fruitless so I gave in and rang McLaren who kindly pointed out that a double-press of the fob button is needed to unlock the car. Doh!

Once back at the hall I was hoping to also have a drive in the even-more-powerful McLaren 720S but all the cars were out and time slots were booked for the rest of the day. Damn! Disappointing – but maybe another day . . .

A big thank you to McLaren for inviting me to this “2017 Tour” – especially Wayne Bruce and Adam Gron (Senior Press Officer) who looked after us so well throughout the event. It was an exceptional day in the company of some exceptional engineering.