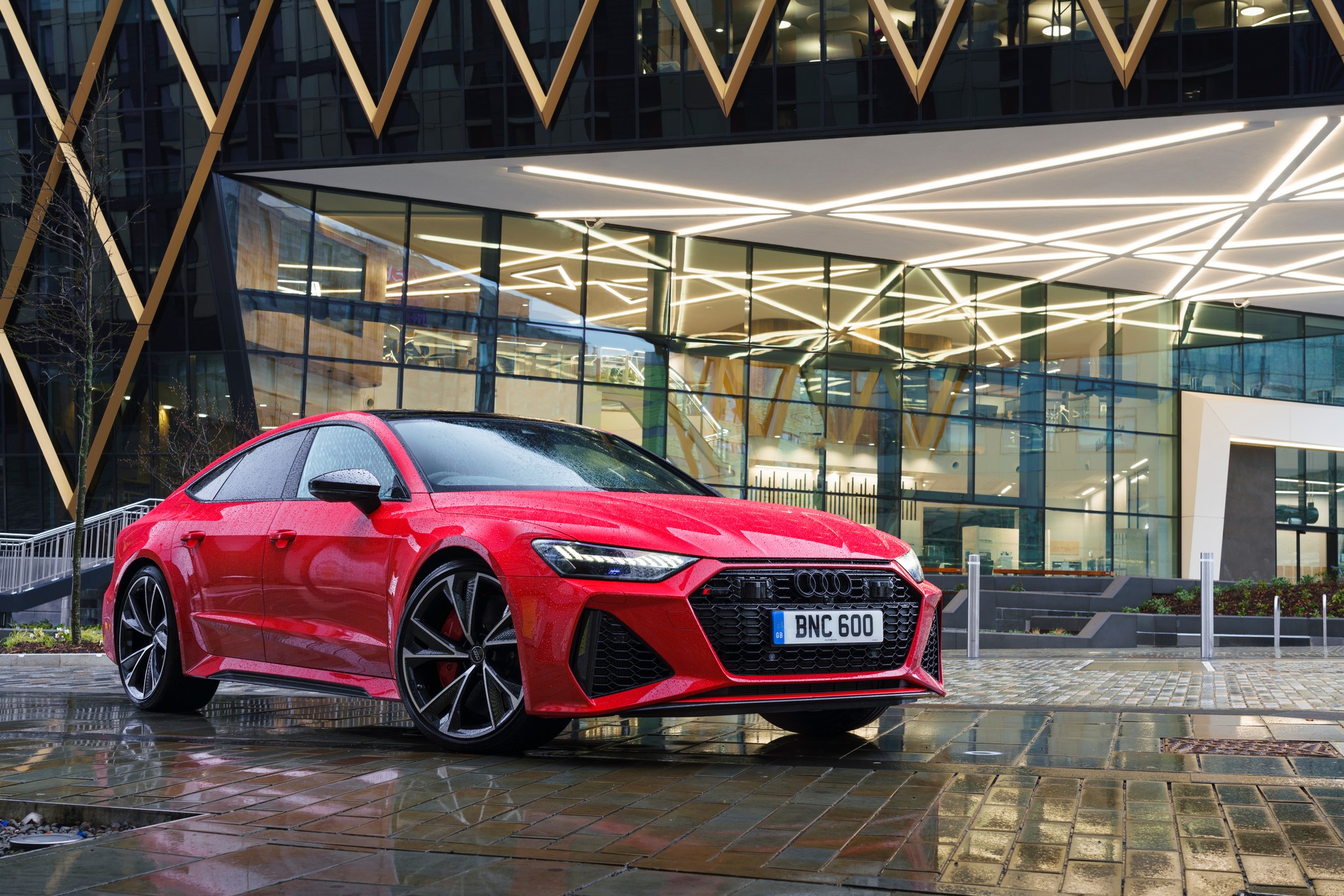 THE new Audi RS 7 Sportback is a true beast of a 5-door coupe – a sophisticated beast, but a beast nonetheless.

With a powerful 4-litre TFSI, V8 twin-turbo under the bonnet, its 600PS and 800Nm of torque can hurl you to 62mph in just 3.6 seconds while the hugely powerful brake system will ensure you have plenty of stopping power when needed.

Despite all this though, the RS 7 manages to be a comfortable cruiser that won’t shatter your spine or rattle your brain every time you hit a pock-marked A-road.

With a choice of suspension settings that includes “Comfort”, along with 4-wheel-drive and 4-wheel-steer you’ll find the RS 7 Sportback to be cossetting and confidence-inspiring when you want it to be. In fact, it could be seen as the perfect Jekyll and Hyde family car as it’s also practical with plenty of storage, space for five and a large boot.

Economical? You’re kidding right? However, it does have a 48V mild-hybrid system on board that works alongside its Cylinder-On-Demand tech which is capable of shutting off 4 of those 8 cylinders when appropriate to do so. Still, in mixed driving don’t expect more than mid-20s when it comes to overall mpg.

There are 3 mouth-watering flavours of RS 7 Sportback and, not surprisingly, all of them are eye-wateringly expensive.

I’ve been driving the entry-level RS 7 Sportback which starts at £98,660 OTR – although mine had over £6,000 worth of extras including, Panoramic Sunroof, RS Sports Exhaust, Comfort and Sound Pack and City Assist Pack, bringing the price to over £104,000.

All come with an 8-speed Tiptronic auto gearbox and multi-link front and rear suspension.

Top speed is restricted to 155mph although you can pay to have the restriction removed, giving you a totally unnecessary top speed of 174mph.

It definitely looks the part too with wide arches and a low-slung presence that out-wows one its main rivals, the Audi RS6 Avant, with which it shares its engine and drivetrain.

Audi have gone all-out to give the new RS 7 Sportback an identity all its own – which the previous version didn’t have – and consequently the only body-parts it shares with its weaker siblings is the roof, bonnet, top of the hatchback and front doors. Everything else is bespoke to the RS 7 model including the meaner-looking front end.

The rear end incorporates a hidden spoiler that rises out of the hatch at speeds over 62mph and those twin oval exhausts distinguish the RS 7 from the lesser S7 model.

Inside, the RS 7 Sportback is just as luxurious as you might expect from Audi’s top-flight GT cruiser with a stunning cockpit that incorporates luxury leather RS front seats with integrated headrests. They look great too with contrasting red stitching and can be cooled as well as heated.

The flat-bottomed RS steering wheel has the usual multi-function buttons present as well as an RS Mode selector button and fabulous aluminum gear-selector paddles behind.

Audi’s Virtual Cockpit is displayed clear and bright behind the wheel with some unique RS mode displays such as G-Force, lap-time, etc. Great fun for when you’re sat waiting for the kids to come out of school and dreaming of smashing Nurburging lap-times . . .

Speaking of kids – you can now fit three of them in the back instead of just two as the new RS 7 Sportback has a conventional rear bench available that is really quite spacious with plenty of legroom back there for even taller adults.

The RS 7 Sportback doesn’t lose out on boot space either with 535 litres available – just the same as in the regular A7 Sportback.

But, of course, with a car like the Audi RS 7 Sportback it’s all about the driving experience and whether the promise is matched by the reality – and the first thing I have to say is that the RS 7 doesn’t disappoint.

Well, I say that but let’s get the one and only disappointment out of the way right now – The V8, twin-turbo isn’t quite vociferous enough on start-up – compared to the Alfa Romeo Giulia Quadrifoglio I had the week before, it’s decidedly coy. Or more grown-up . . .

Even on the road, when driving (ahem) enthusiastically, the 4.0 TFSI engine is never shouty – even with the optional RS Sports exhaust. It does burble nicely though and on the downshifts there are moments when the hairs on the back of your neck stand up; but the RS 7 is no hooligan – just assured, controlled, huge amounts of power that is guaranteed to put a smile on your face – even if the soundtrack is actually better from outside of the car.

Make no mistake, all 600PS is usable because the RS 7 package is so well engineered. How such a long car that weighs just over 2000kg can dart around bends like a scalded cat is astonishing.

Dynamic mode stiffens up the suspension, but even on 21in rims the RS 7 Sportback doesn’t become your enemy, waiting to skip you into a hedge at the first opportunity. It is always on your side and if you take the time to go through the myriad of options programmable in the RS1 and RS2 modes, you can set up the car exactly as you wish and will probably never touch the mode-selector again.

Comfort mode makes sense on long motorway drives where the car feels every inch the perfect cruiser. Comfortable, quiet and refined with seats that won’t play havoc with your back even on the longest of runs. On a 3-hour trip up to Cumbria me and my passenger arrived feeling fresh and stress free with the car showing an mpg figure of just under 30.

I think anyone could easily live with the RS 7 Sportback as a daily driver. I found the 4-wheel steering to be a boon around town, making tighter manoeuvres simpler than they should be in such a large vehicle.

Of course you’ll want to sample the beast within though and when you do please choose your moments carefully. Preferably on a track or private road because the RS 7 will throw you at the horizon in a licence-losing flash.

The throttle-response is immediate – as are the gearchanges. In manual mode you can eek out the maximum hooligan from the exhaust note but in fairness you can’t get up through the gears any faster than in full-auto and besides, you’ll need all your concentration focused on the road ahead.

Not surprisingly there appears to be endless amounts of traction and the RS 7 can hold on quite comfortably way beyond what I’m capable of putting it through. Steering is utterly predictable with turn –in much sharper than you have any right to expect from such a large unit.

So, Jekyll and Hyde indeed but without the ugliness of the latter. The Audi RS 7 Sportback is a very special motor indeed – if you can afford one. A weapon of a family coupe that will caress and sooth you on family days out and then thrill and maybe slightly scare you when alone together. A Beast indeed, but beautifully so.