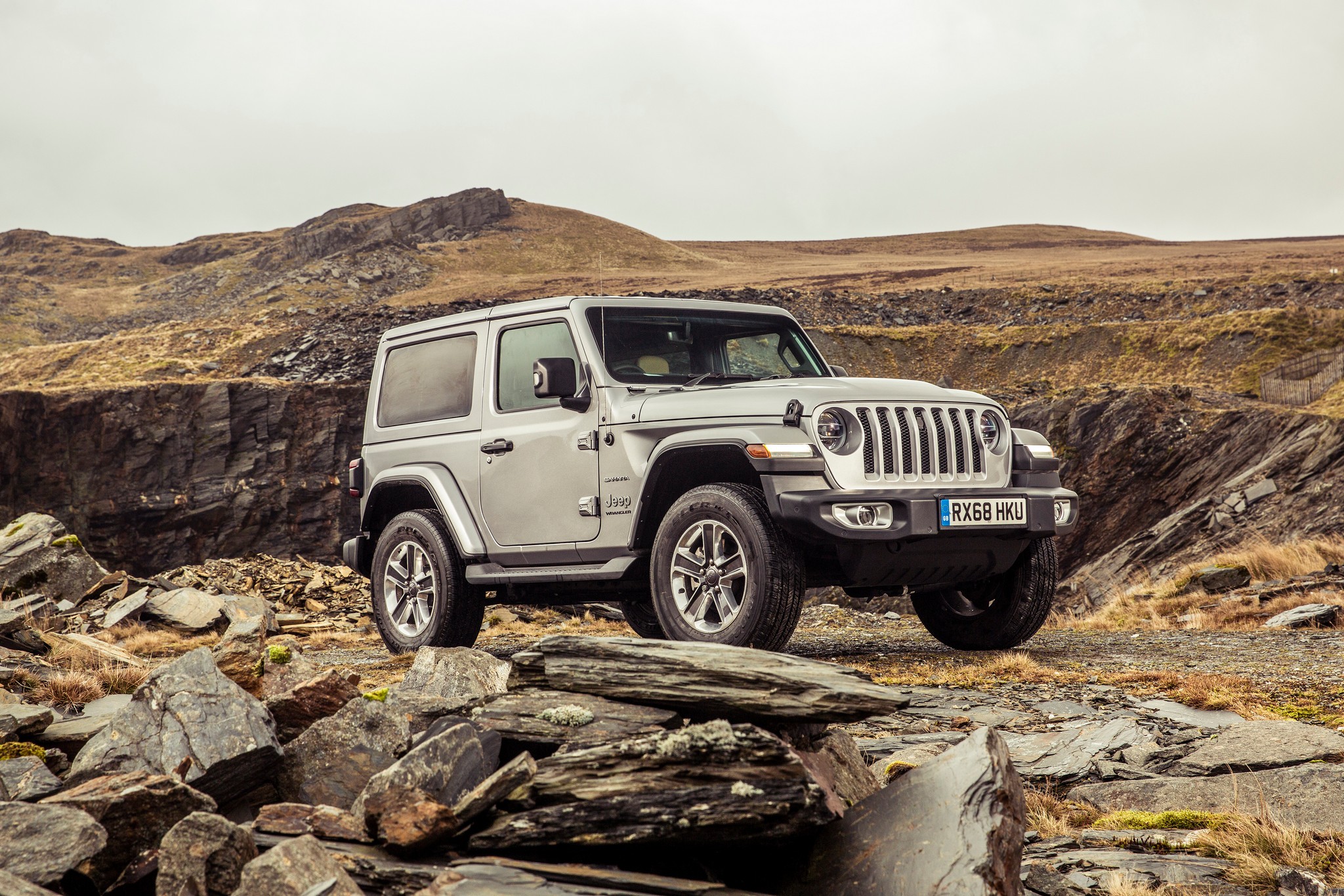 IF you’re a fan of M*A*S*H and looking for a 4×4 off-road vehicle that has a whiff of nostalgia about it, then you’re probably going to consider the Jeep Wrangler.

If a rugged cuteness is also a consideration but you actually want some decent power, then the Suzuki Jimny may get overlooked in favour of the 2-door Jeep Wrangler.

The Wrangler certainly looks the part – and that’s before you use the supplied tool kit to remove both doors, the roof and the rear panel to provide you with a kind of ‘Jeep Lite’. Which should impress any under-12s – especially if you unbolt the windscreen and fold it down onto the bonnet.

However, if you like the thought of your SUV doubling up as a beach-buggy then the Wrangler is probably your ONLY choice.

So, how does it look? Who doesn’t know what a Jeep looks like? Yes, it still has the 7-slot front grille and round headlights along with the huge front bumper, wide, flat bonnet and front wings that are big enough to eat your breakfast off. It all looks pretty terrific from the driver’s seat and those well-defined wheel-arches make the Jeep’s width less daunting when negotiating awkward spaces.

And it still looks tough. Like it really is made for off-roading – which it is. In fact, it’s one of the most capable off-roaders you can currently buy with two gear-levers, just like in proper 4x4s. The higher-spec Rubicon also gets locking front and rear diffs.

There’s not a great deal retro about the Wrangler’s interior though, with an 8.4in touchscreen in the centre of the dash that looks thoroughly modern – and it works well too with sharp graphics and a decent response time.

Apple CarPlay and Android Auto are included as well as a whole heap of off-roading info, if you’re so inclined (pun intended).

There’s a handy 7in TFT screen between the main dials too that can be configured to show pitch and roll as well as all the usual trip info, nav directions, etc.

The whole dash looks a little upright and utilitarian by design, but that’s in keeping with the overall feel of the Wrangler which is that it’s still capable of exiting a landing craft and storming up a beach – but now with climate control and some bangin’ tunes from an Alpine premium sound system.

The optional Heritage Tan McKinley leather upholstery on my test car felt and looked suitably premium, while there’s enough chrome trim up front with exposed chrome screws to make sure you know this is no namby-pamby SUV.

In the rear, it’s not so great with limited leg room more suited for kids than adults and awkward entry/exit. You’re best climbing in from the passenger side where the front seat slides and tilts more to give easier access. From the driver’s side it’s more of a scramble.

Once ensconced in the rear you’ll find decent headroom thanks to the Wrangler’s high roof line and it’s not at all claustrophobic thanks to large side windows.

Boot space in this 2-door model is very modest but you can fold down the rear seats if you need to carry bulkier items. With the rear glass raised and the tailgate pulled wide open there is a good-sized opening to help loading awkward items.

If you really need more space, then the longer 4-door Wrangler offers twice as much boot space and extra leg room for rear passengers.

And how does it drive? Well, once you’ve stormed up the beach, took out a couple of enemy pillboxes and found yourself in the middle of a bombed-out town-square you’ll want to head off down an actual road to see how this Willys Jeep-inspired vehicle handles.

Not brilliantly, actually. The 272bhp 4-cylinder petrol unit gives plenty of grunt while the 8-speed automatic gearbox does an excellent job of making sure you’re in the correct gear no matter what. However, if you’re more used to the likes of a Kia Sportage, VW Tourag or Nissan Qashqai then you’re going to have to re-think your expectations.

Yes, there are plenty of SUVs out there that are much more suited to life on the tarmac and they will be cheaper too. However, they probably won’t come with all-wheel-drive as standard, they will all be totally anonymous on the road and they’ll probably all struggle with anything more than a slightly damp field.

The Jeep Wrangler is brilliant in the mud and capable of driving across rocky terrains without even breaking a sweat, but on the road it doesn’t feel very refined. Yes, the 4-cylinder engine is quieter than the old V6 lump but the ladder-framed Wrangler still feels very much old-school when it comes to dashing along an A-road.

Body roll is quite pronounced and it will make you reign in the horses long before you can have any fun.

On the motorway it is quite noisy due to the lack of aerodynamic bodywork, however it is better than I had expected and even at 70mph I consider it acceptable for all but the lengthiest journey. The more off-road focused Rubicon is even worse with larger, nobbly, extreme rubber that would drive you mad on a long tarmac journey.

Don’t expect to get great mpg – the Wrangler (even in this 2-door form) is quite heavy and I was only managing to reach the mid-20s on mixed roads. A steady run on the motorway might break the 30mpg mark though.

There is a diesel version of the 4-door Wrangler that will be better on fuel but it just doesn’t to look as cool as the 2-door.

Or maybe it’s the perfect SUV for someone who wants to stand out from the Crossover/SUV crowd and they don’t really give a damn about on-road refinement. They probably already own an old Land Rover Defender or were always meaning to buy one. This is a vehicle for the adventurer.

Looking at the latest configurator at https://www.jeep.co.uk/car-configurator/ it appears the 2-door Sahara model I’ve been driving is no longer available which makes the better-equipped Overland model the entry-level at £49,410 on-the-road.

And that’s a whole heap of cash for an SUV that is compromised on space and on-road ability. However, the Jeep Wrangler looks terrific, it will make you smile every time you walk up to it and if you ever find yourself stuck and unable to move in one of these things – it’s definitely your fault and not the Wrangler’s . . .