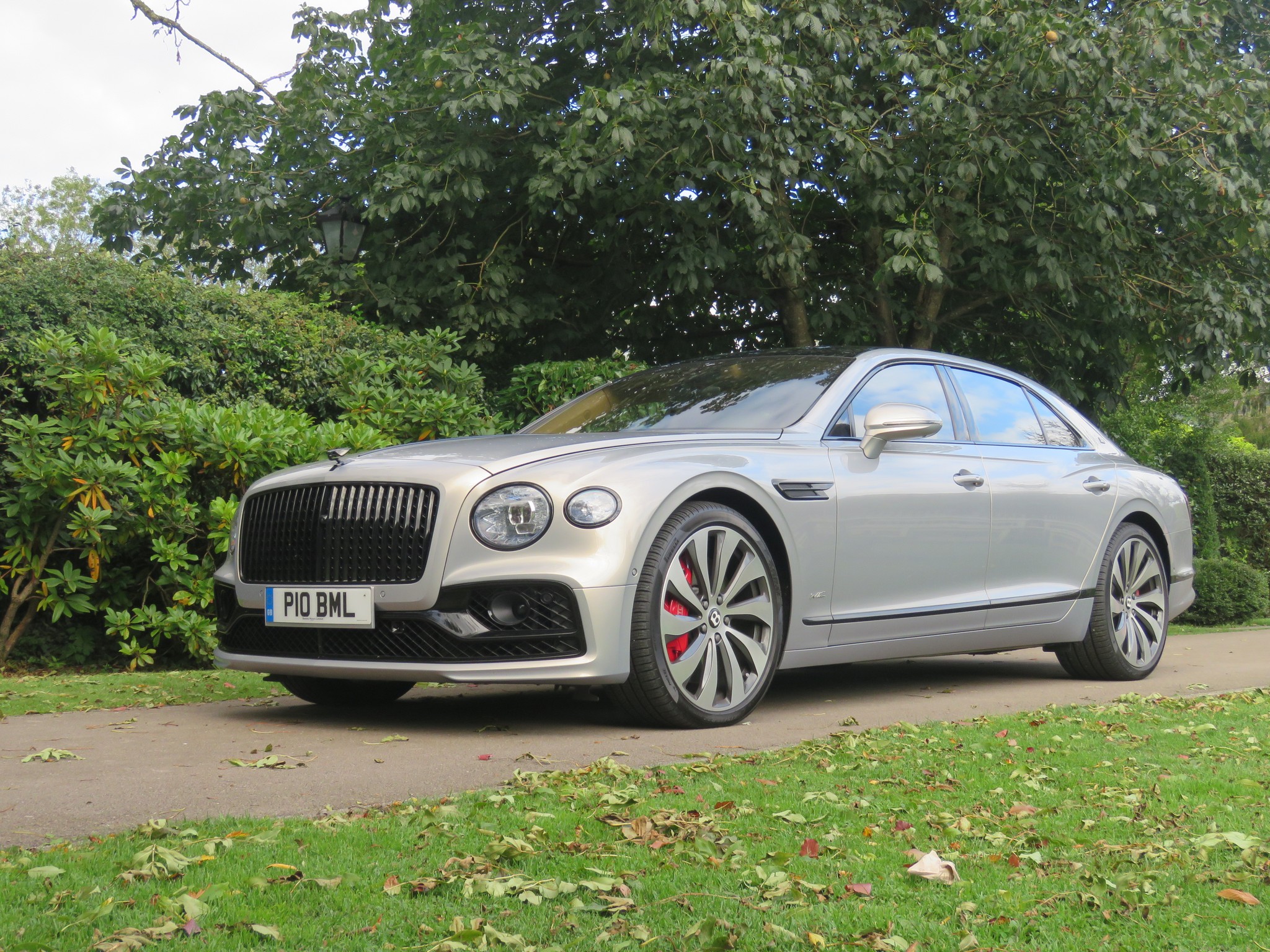 BENTLEY’S new Flying Spur is the Crewe-based company’s’ latest offering and will, eventually, replace the rather-marvellous Mulsanne as their flagship, luxury grand-touring saloon.

Like the outgoing Mulsanne it is an impressively large 4-door saloon that grabs your attention immediately and, once inside, makes you “Ooh!” and “Aah!” like a small child visiting Santa’s grotto for the first time.

And there are many, many goodies on show alongside some impressive engineering and tech that is not always so obvious.

Take a walk around the Flying Spur (Remember: always tell someone where you are going and what time to expect you back) and you’ll marvel at how the designers and engineers have managed to make it appear that the car is honed from one piece of material. Almost.

It’s only the huge gloss-black radiator matrix grille with bright chrome vertical vanes that contrasts the Flying Spur’s elegant curves. It’s certainly striking from the front and perhaps not to everyone’s taste but I think it fits the car’s purposeful stance – a powerful look without looking too muscular.

Eye-catching, cut-crystal effect LED matrix headlamps add to the car’s impressive exterior features. These are enhanced by a chrome sleeve that allows them to sparkle like jewels – even when they’re not lit.

Also, available for the first time on the Flying Spur since the 1950s, a striking new Flying B mascot returns to crown the matrix grille. Crafted from stainless steel and hand-polished, it houses illuminating wings which light up in synchronicity with the headlamps. Try to break that mascot off and it snaps back into the bodywork in the blink of an eye. I almost lost a finger showing this off to a colleague . . .

The mascot is automatically put to bed when you switch the car off – or you can lower and raise it at will from inside the car using the infotainment screen or the rear-passenger’s touch-screen remote.

And it’s this kind of attention-to-detail that pervades the Bentley Flying Spur throughout. Some may think it trivial gimmickry, but when you look closer at the thought and craftsmanship that has gone into creating something that other manufacturers may not even have on their radar, then you tend to think “Yea, good on you Bentley. Why not?” And yes, a sense of British pride plays a large part here too. We find pleasure and wonder in the trivial – especially when great skill and imagination was the source.

The Bentley Flying Spur is available in the UK with just one engine option (at the moment) – a 6.0-litre twin-turbo W12 that produces 626 bhp and 900Nm of torque. Four-wheel drive is standard. Top speed is 207mph and the 0-60 dash takes just 3.7 seconds. After just 8.2 seconds you’ll be at a licence-losing 100mph. All very impressive for a spacious saloon whose gross weight is 3000kg.

Under light load, 6 of those 12 cylinders will shut down but you’ll still only achieve an MPG figure in the low 20s.

The many colour combinations available, both inside and out, is truly mind-boggling if you opt for the Mulliner Driving specification. But no worries as Bentley’s own design experts will steer you gently toward the sublime rather than the ridiculous.

Recently, I’ve been lucky enough to get acquainted with a “First Edition” Flying Spur for a few days and it was a few days of many, many smiles and zero disappointments.

The exclusive new Flying Spur First Edition is a rare and highly collectable model, enhanced with the addition of a number of features as standard, which include a First Edition badge with a number ‘1’ in the centre, appearing both on the exterior and inside the car. The treadplates also feature a motif of the words ‘First Edition’, with your choice of either this phrasing or the Bentley Wings embroidered onto the seats.

Perhaps the most desirable feature on this edition is the aforementioned electronically deployed Flying B mascot in bright, polished steel with illuminated wings. But that’s not all – Mulliner Driving Specification comes as standard to further enhance your Flying Spur as this adds new ways to express your individuality, including tactile three-dimensional diamond leather door panels and a unique 22” wheel.

Cost? Not cheap. Okay, you already knew that so here goes: Basic OTR price is £168,300 but add in the options on my car (First Edition, Blackline Spec, Naim Audio System and Rear Seat Entertainment tablets) and you won’t get much change from £210,000.

So, you’ve rushed to put a deposit down and now you want to know just how well this icon of Britishness feels from behind the wheel.

Majestic is one of the words that could be used. Also, powerful, outstanding and glorious. You get the picture, right?

Push the start/stop button on the centre console and that W12 power unit awakens with a subdued burble befitting of a Bentley.

There are drive modes available from the beautifully machined rotary controller but the “Bentley” mode is pretty much all you’ll need for any situation. Does it waft over poor road-suraces? Check. Does it cruise at motorway speed without a sound? Check. Does it still scare the bejeebers out of you when you floor the accelerator? Check.

The rapid gearshifts and easy acceleration come courtesy of the eight-speed dual-clutch transmission while Bentley Dynamic Ride – which comes as standard – adds even greater levels of control and confidence with a built-in 48V Electronic Active Roll Control system designed to deliver impressive agility and stability at any speed.

Electronic all-wheel steering reduces the car’s turning circle at low speeds for easier parking and manoeuvring, while out on the open road it increases the stability of the car when overtaking or changing lanes.

All in all, while no Porsche Cayman GT4, the Bentley Flying Spur grips and turns-in like nothing else this size. It is not boat-like in any way, shape or form. It’s just downright sportier than physics may want it to be. Well, physics will just have to think again . . .

Of course, the new Bentley Flying Spur is not a car for hooning around A-roads or doing donuts on the local supermarket car park. It’s a piece of motoring brilliance, both in ambition and execution. It is a statement about quality, craftsmanship and innovation rather than simply money, and while it may be out-of-reach for the vast majority of motorists, we should all be thankful that it is there at all. We all need to dream.