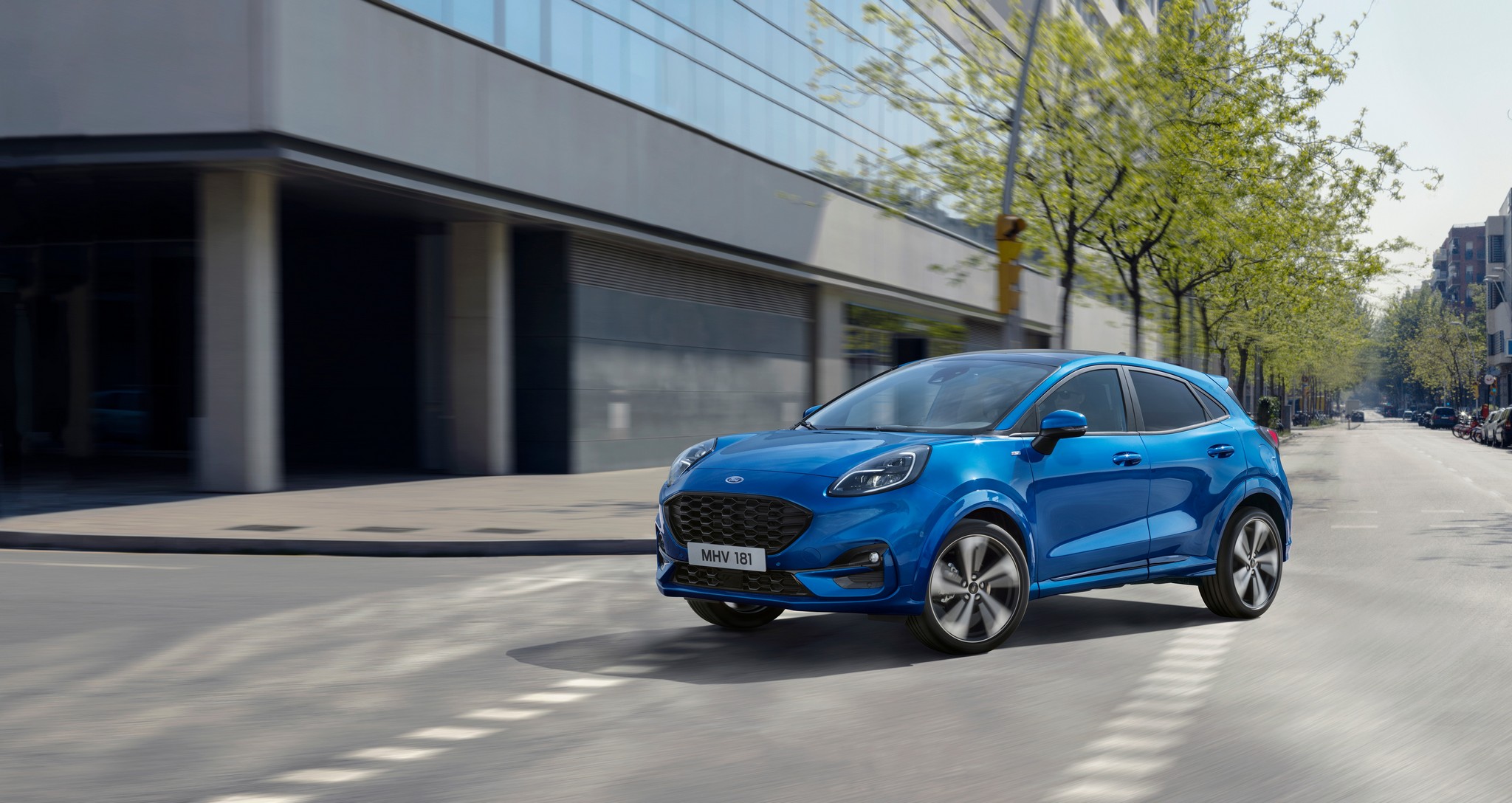 THE nation’s thirst for SUV or Crossover vehicles (take your pick on the monika) means more and more hatchbacks have been jacked up and roughed-up. But while the Nissan Juke was the first such vehicle to sell in large amounts, it was never very pretty, was it?

Not that the new Ford Puma could be described in flowery terms but at least it has some kerb-appeal and I can testify that in ST-Line trim it can certainly turn heads.

Based on an extended Fiesta platform the Puma muscles in on the EcoSport to take pride of place as Ford’s premier small SUV and goes head-to-head with the likes of the Nissan Juke and Renault Captur.

The good news for Ford fans everywhere is that the new Puma is a better driver’s car than both these rivals and in this price bracket you’ll struggle to find a Crossover that is more fun to chuck about.

All Puma’s are based on the tried-and-tested 1.0-litre EcoBoost, 3-cylinder engine with a mild hybrid (mHEV) option available for a mere £300 extra.

Power output is either 125PS or 155PS with prices starting at just £21,640 for the Titanium model and rising to a reasonable £25,240 for the luxury-spec ST-Line X Vignale.

It’s worth noting that a Puma ST is available to order from October with deliveries starting in January 2021. The fast Ford will have 200PS under the bonnet and be capable of 0-60 mph in under 7 secs. Expect the price to be around the £28,000 mark.

My mild-hybrid ST-Line model also came with a body kit which included a larger rear spoiler and sportier suspension as well as an ST-Line, flat-bottomed leather steering wheel and aluminum gear knob and pedals.

The ST-Line also gets a very smart 12.3in. fully digital instrument cluster which, although not massively configurable, is impressive for a car in this price bracket and adds a touch of class to a cabin which already has some very nice sporty touches such as red stitching on the wheel and gear-shift gaiter.

The interior of the Puma will be familiar to anyone who has previously owned a modern Ford. Everything is laid out well and although some of the lower-down plastics are decidedly on the cheap side, the overall quality is better than almost all its rivals.

With an excellent driving position, comfy seats, good visibility (well, adequate through the rear window), easy-to-use knobs for the temperature controls and Apple CarPlay and Android Auto to hand, what more could you ask for?

Okay, so you want boot space as well. The Puma offers 456 litres which trumps most of the competition as well as its own cousin, the Ford Focus. The opening is nice and wide too with a flat floor that should make loading larger items a doddle. Lift that boot floor up and you’ll find a Megabox – Ford’s hidden storage area that’s deeper and more useful than you’d probably imagine.

The rear seats split 60:40 for even more practicality while rear passengers get adequate space although 6-footers will struggle with that sloping roof line.

However, it’s out on the road where the new Ford Puma will win you over with its precise 6-speed manual gearshift (a 7-speed auto box is available on the non-hybrid models only), surprisingly communicative steering and an eagerness around bends that should put a smile on your face.

The mHEV system is imperceptible in use, even though the engine may stop running when you’re coming to a halt. This saves fuel while the electrics keep your power-steering, air-con, etc. running. Hit the accelerator again and you won’t even notice the engine kicking-in again – given an extra boost by the electric motor. It’s all seamless and very impressive in execution.

While you won’t be entering your new Puma in any drag-races, you’ll find the 0-60mph time of 9.8 seconds very respectable and quicker than the likes of the Nissan Juke, Audi Q2 35 and VW T-Roc. The mHEV 155 model manages an even swifter 9.0 second sprint without being much thirstier.

The ST-Line model comes with a sportier suspension feel which makes the ride a little firmer than that of the Titanium model but it is still very pliant over pot-holes while feeling capable around the A-road twisty stuff. There is certainly fun to be had with body-roll kept in check unless you get really silly.

The Puma is quiet enough, even at motorway speeds, although I suspect if you go for the larger 18in or 19in wheels, tyre noise may become irksome. Wind noise is well suppressed and the 3-cylinder engine settles down to a muted hum once up to speed. It can be a little vocal at higher revs but no more so than its rivals.

With combined fuel figures of around 50mpg for all engine choices and CO2 emissions being under 100 g/km you might even consider the new Puma as your next company car.

The new Ford Puma makes a lot of sense. The standard tech and features are outstanding even on the entry-level model and although some rivals have a lower starting price, you’ll find adding in options to match the Puma will prove costly.

Overall, the new Puma is a well-equipped and practical sporty looking Crossover/SUV that has a touch of sportiness about the way it drives too. The coupe-style roofline marks it out from other small SUVs at this price point and there are some great colour choices – Desert Island Blue being my own personal favourite.

It’s good to see the Puma name back in the game – although this time it’s all grown up . . .