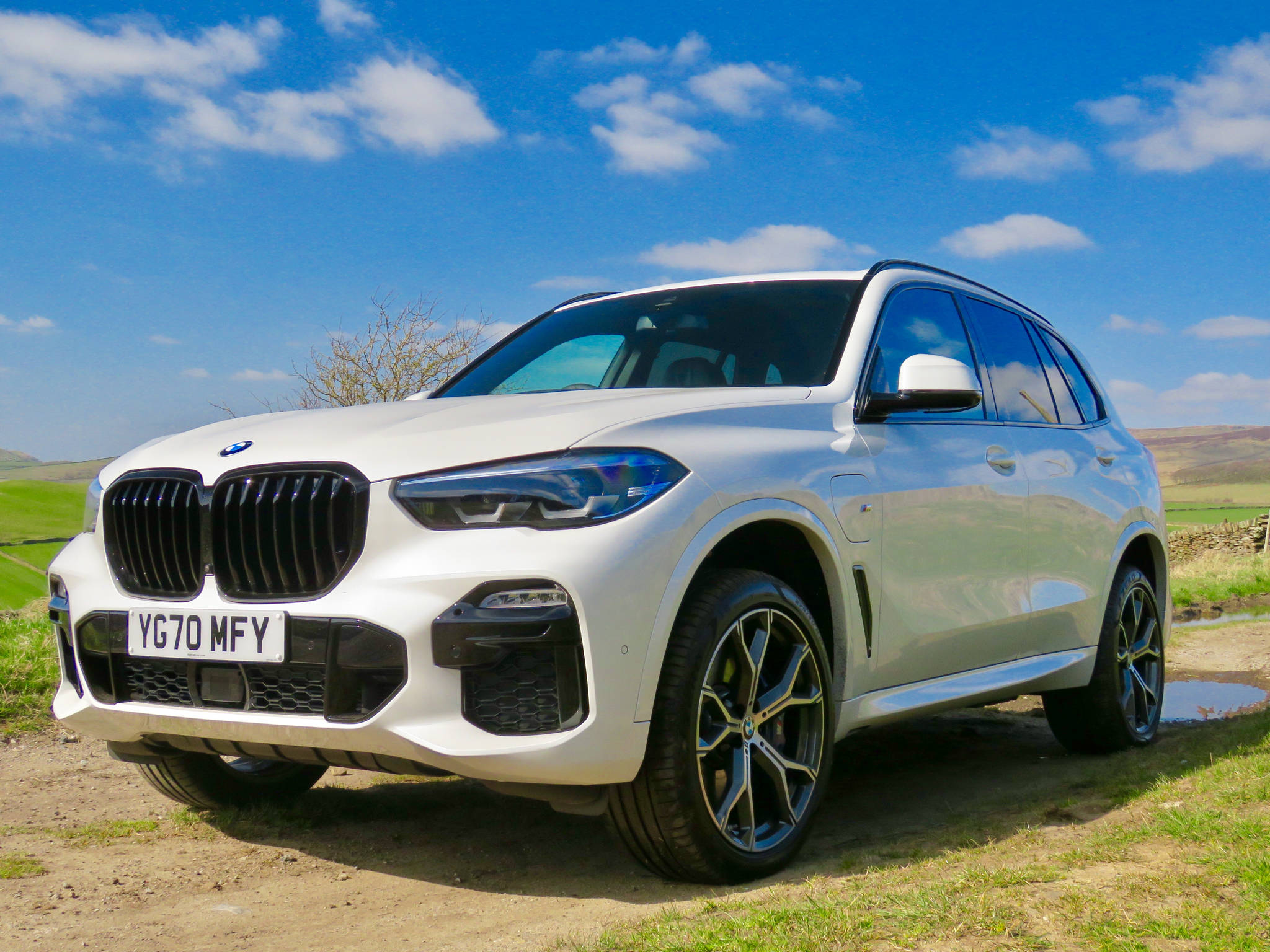 This means the new Beemer is capable of a very useful 54 miles on battery power alone – more than enough for the average commute of just over 20 miles. However, since many are still working in their pyjamas, this may not be so significant . . .

What IS significant though, is just how good this latest hybrid BMW X5 is. It’s won many plaudits from journos and the public alike because it is so easy to live with – if you can afford the £60K-plus asking price.

If you can, then you’d be hard-pushed to find a more satisfying SUV to own. I drove the X5 xDrive45e back-to-back with the Alfa Romeo Stelvio Quadrifoglio and after spending a week with the Alfa, I thought the BMW would feel a little disappointing. I was wrong.

Now, don’t get me wrong, I know I’m comparing apples with oranges here – a fire-breathing V6 Italian that can hit 60mph in 3.2 seconds and a Straight-Six Hybrid that is less about all-out performance than it is about all-round ability. (It does only take 5.6 seconds to reach 60mph though . . . )

It’s not just the refinement of the BMW that pleases though, it’s the way it puts it’s power down with a boost from the electric motor when needed. There is no lag like you get in diesel SUVs – instead you always pull away immediately – and even if you are in pure EV mode it feels sharp and satisfying.

I also love the extremely clever way in which the BMW can  predict which combination of drive to use. BMW call it Anticipatory Hybrid Drive and, in a nutshell, it means that with your route loaded into the Sat Nav, the system will work out just where it should be running on electric or hybrid mode depending on road type, predicted speed, time of day, gradient, etc. etc.

Your own driving style is also taken into account and the system will learn over time to give you the best possible economy – especially on regular routes, such as the daily commute.

With just 30g/km of CO2 emissions, this X5 is also a serious contender as your next company car as you’ll pay only 6% Benefit-in-Kind (BiK) tax.

And while the official MPG figure for the BMW X5 xDrive45e is one of those ridiculous figures that manufacturers bandy about when it comes to hybrids, (188mpg in this case) I found I was regularly getting over 54mpg on a 30-mile, mixed-road commute. And I wasn’t driving Miss Daisy.

If I’d had a home charger and my place of work provided charging points, I wouldn’t need to burn any fossil fuel at all on my commute. Maybe.

The reality is though, that you’ll regularly want the combination of the 282 bhp from the 3.0 litre, 6-cylinder petrol engine and the 112 bhp from the electric motor for the full 394 bhp experience.

I recommend fuelling up and then let the car decide when best to burn it. It all leads to a stress-free, relaxed experience that is only enhanced by the beemer’s top-notch interior.

However, I can tell you that the xLine model is just as good to drive – with the same powertrain including auto transmission with gearshift paddles – and will cost just £66,415 OTR. It’s as much as you need to spend to have a class-leading PHEV, all-wheel drive, family SUV on your driveway.

The xLine model still comes with full leather upholstery and 19in alloy wheels as well as aluminium roof rails, a 12.3in Digital dash display and a 12.3in Touchscreen with Apple CarPlay and Android Auto.

It’s all wonderful to use, of course, with tactile knurled rotary knobs beneath the touchscreen making changing the temperature easy-peasy while on the move. A bank of climate and heated-seat buttons are just below the central vents with the audio buttons and presets further down.

The sports seats in my M Sport model were just the right side of firm and the driving position is spot-on with plenty of electrical movement in both the seat and the steering column.

The gear-shifter is a blingy, cut-glass affair that looks a little out of place in the sumptious, yet professional interior of the X5, while the iDrive system for all your infotainment needs is a doddle to use with both gesture and voice-control as standard.

Rear passengers are catered for very well with plenty of knee and headroom and 3 adults should be okay on shorter journeys. A couple of kids back there will have plenty of space and the ISOFIX anchor points are easy to get to for child seats.

The only place the X5 xDrive 45e loses out on is in the boot, where it is down 150 litres on the non-hybrid X5 thanks to those bulky batteries. Fear not though as there is still plenty of space back there for a family of 4.

I like the way the X5 looks and I love the way the X5 xDrive45e drives. It’s almost perfect in any situation and had me thinking this could be the only car you would ever need for any trip – wether it be the school-run, a blast around the local B-roads or a long motorway haul where it is probably best-suited as it is almost whisper-quiet with very little wind or road noise.

The 21in wheels are fine 98% of the time, but if you hit a particularly badly-scarred patch of tarmac then you will feel a thump even if you have the ride mode set to Adaptive and not Sport.

Ride height can be raised or lowered for those who may wish to off-road but I suspect this is a button that will get very little use for the average X5 owner. Still, handy to get you to that Airbnb cottage down that rocky farm track in mid-Wales . . .

The technology aboard the BMW X5 iDrive45e is impressive, easy to use but not too intrusive, while practicality is up there with the best, alongside the build quality and feel-good factor when you’re sat in the driving seat.

The fact that it is just so good to drive is the icing on an already-cherry-topped cake. The best PHEV you can buy at the moment, by a long way.