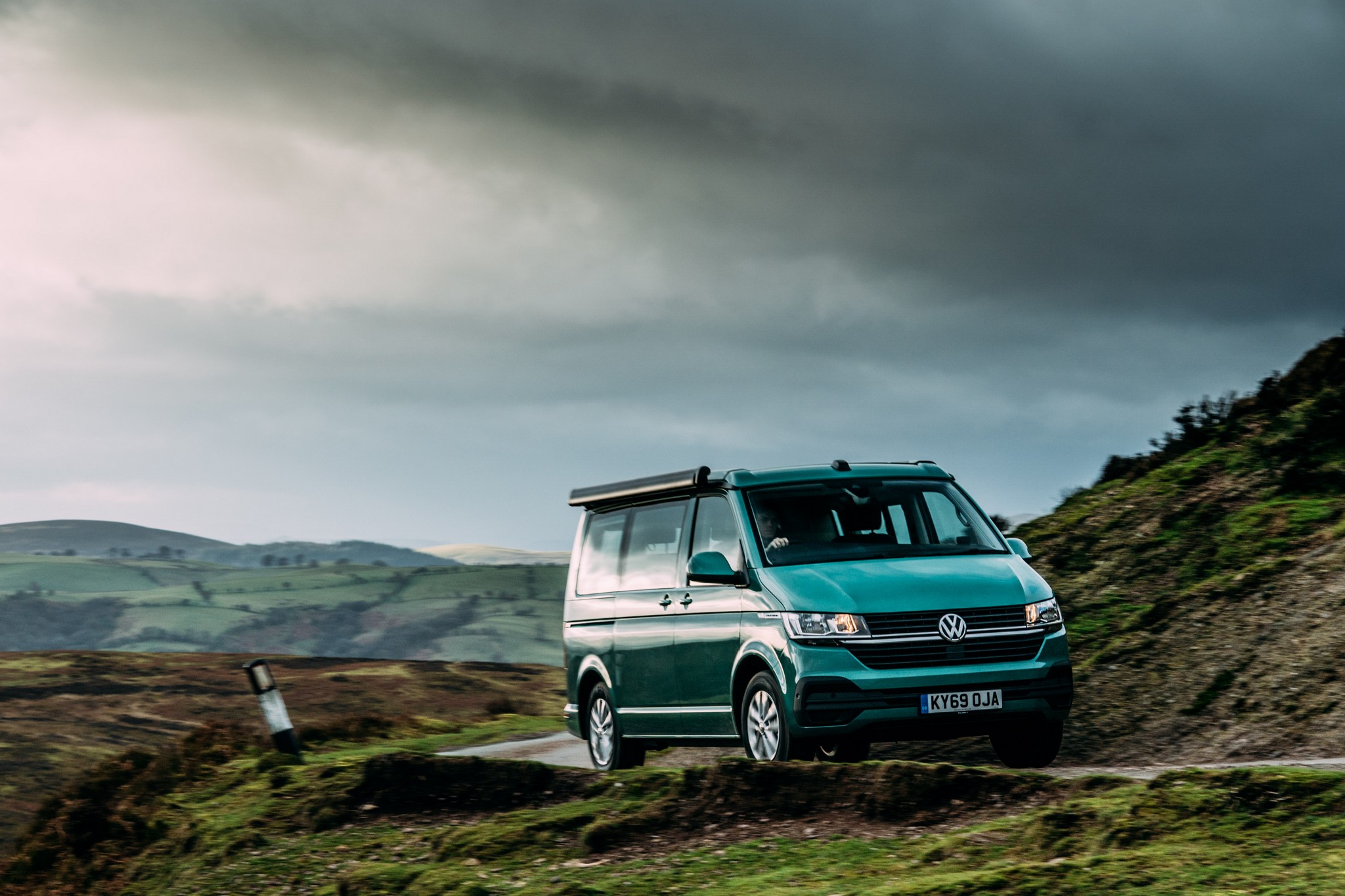 WELL, it sounded like a good idea at the time. An October weekend break on the Suffolk coast, during a pandemic, in the new Volkswagen California 6.1 campervan. What could possibly go wrong? I decided to get fully prepared beforehand – just in case.

There are not many review vehicles I take delivery of that I need to spend time with simply to figure out how to use them. Okay, not many vehicles have a kitchenette and 2 double beds as well as a fridge, central heating, window blinds, a pop-up bedroom and outdoor seating with table, chairs and retractable awning.

As a first-timer camper I found it all quite exciting although Mrs. B soon got fed up with “Ooh, and look at this – it slides out of there and it converts to a, blah, blah, blah . . .”

Clever use of space is a given in any camper van but the Volkswagen California appears to take it to new levels – even though the two front “Captain’s Chairs” were difficult to rotate as they caught on the door/kitchen unit unless you positioned the backrest exactly right.

I thought the manual pop-up roof/bedroom may be a problem (it’s electrified on the more expensive Ocean model) but it was a doddle – once I’d figured out the clips on either side – and could be up and down again in seconds. You’ll need to be pretty nimble to climb into the higher bed though. Perhaps not Mo Farah nimble – but Homer Simpson would definitely struggle.

With a tankful of fresh water for the washing-up, a full(ish) bottle of gas for cooking and a fridge that easily swallowed what we needed for the weekend we set off for the Norfolk coast – a journey of almost 200 miles.

And what a pleasant journey it was. The California drove much more like a regular car than I had expected with a thoroughly modern dash, infotainment system and controls that are easy to reach as well as use.

The 7-speed DSG gearbox helped, of course, but the California surprised in how it felt on the road generally – more like a large SUV than a van and with good visibility all round it certainly wasn’t intimidating to manoeuvre – even when we pulled into a tight supermarket car park to pick up some extras (mainly sausages and wine – the important stuff).

The 2.0-litre diesel engine puts out 150bhp and this feels more than enough to keep up with motorway traffic and its refinement makes for a relaxed drive.

The front-wheel drive setup with independent rear suspension and load-sensitive shock absorbers means the California feels fairly well planted even through the A-road twisties, and while you’d be silly to expect massive levels of grip and no body-roll, the Volkswagen is predictable, steers very well and is nowhere near roly-poly.

I imagine any passengers occupying the rear bench seat would be comfortable too with room to stretch out in front of them and large windows to watch the passing countryside whizz by.

There was no shake, rattle or roll from the interior fittings. So long as the folding table is stored correctly and the numerous cupboards are pushed firmly closed you should find the California drives very quietly with zero annoyances.

A lunch break at Kings Lynn afforded us to pull up in the local park and get to grips with the cooking facilities and the interior in general.

With the pop-up roof extended, the “living area” of the new California is a pleasant place to be whether you’re just chilling or preparing and eating food. There’s plenty of headroom and the light wood-effect and light-grey surfaces and fittings add to the California’s feeling of spaciousness – no dark, light-sucking materials in here.

The slide-out dining table is simplicity itself and 4 could comfortably dine around it. With the two-burner stove suitably employed, myself and Mrs. B were soon enjoying an excellent sausage butty while seated comfortably out of the rain which had just started to come down. We could have braved sitting under the extendable awning but the temperature was a little on the “parky” side.

Which brings me to the Volkswagen’s aux heating – which was excellent and is controlled through Volkswagen’s new camping touchscreen controller which sits just above the rear-view mirror. There is also an extra key-fob type remote which means you don’t have to get out of bed to switch the heating on or off, although it is fully programmable too.

The camping touchscreen can also be used to control the LED lighting which is configurable for both “downstairs” and “upstairs” and even includes a sunrise feature which will gradually bring the lights up at a set time.

By the time we reached our (almost desolate) campsite the rain had become biblical. I quickly learnt that the California’s huge tailgate was the perfect rain-cover for retrieving things out of the boot. However, I wish I had taken the time to learn how the electric hook-up works because I got soaked anyway whilst trying to figure it out.

I also didn’t bother using the handy self-levelling feature that is integrated into the camping touchscreen as it was too wet to get out and start messing about with the supplied “cheese wedges”.

I strongly suspected that we wouldn’t be using the outside table and chairs either, but it’s worth mentioning that the chairs fold very neatly into the body of the hatch and the table is easily retrieved from the sliding door.

With all restaurants closed due to the pandemic we decided to get a local Chinese take-away for our first evening meal in the ‘van. With the rear bench seat pulled up to the dining table and the laptop sat on the kitchen worktop, it was easy to enjoy the meal while watching “Rocketman” on our streaming service.

We forgot all about the rain battering the outside of the California and as we weren’t sure about the ability of the pop-up roof to keep water our – or even stay “popped-up” in the strong winds – we kept it down, which was fine when you’re simply chilling on the “sofa” with a film and a bottle of wine.

We needn’t have worried though as the pop-up roof is fully waterproof. We also found a cover for the roof that offers even more protection from bad weather and noise but I didn’t fancy tackling that job in the current conditions . . .

Sleeping facilities are more than adequate with enough space for 4 adults – 2 up and 2 down.

We’d tested both options for comfort before setting off and decided the upper space, with its new mattress design, was the most comfortable. Volkswagen have done away with the wooden slats of the previous model and replaced the mattress with an array of independent plastic “springs” that work very well in both support and allowing better air-circulation (more beneficial on warm, balmy nights, I’m sure).

However, due to the weather conditions we decided to sleep downstairs and once the rear bench seat was folded down, pushed into position and the mattress was in place we were ready to throw on the cover and quilt – the whole thing took about a minute.

After about 5 minutes lying down with our heads toward the hatch, it became apparent that maybe I should have levelled the California as our heads felt slightly lower than our feet and it just felt – well, weird.

It was bucketing-down outside so we simply turned 180 degrees in the bed and that felt fine.

We both slept well. The auxiliary heating was very quiet and we didn’t need it to be on all night. We certainly never got cold or uncomfortable. We both felt we had plenty of room to move about in and overall, the comfort levels exceeded expectations.

The rain didn’t let up all the following day but we took a drive out to a couple of beaches and villages to take a quick look and even took a walk along the prom at Great Yarmouth.

Getting back in the California with soaking-wet coats meant condensations began to form on the windows but the air-con system had them clear in a matter of minutes.

The large sliding door on the driver’s side also made entry and exits very easy. Once inside you could slip off your wet coat and then easily slide into the front seats. There always appeared to be plenty of space to manoeuvre.

The continuing poor weather meant we didn’t try out the roof bedroom and the awning didn’t see the light of day, along with the table and chairs.

Although the conditions were less than ideal for any type of camping, we could see how well the Volkswagen California 6.1 does its job of providing cooking, eating and sleeping facilities in a mobile package. In great weather it would’ve been a much more enjoyable experience – although the Campervan provided us with infinitely more comfort than a tent would have in the same situation.

Of course, competing with hotels is not what the Volkswagen California is all about. Ask any campervan veteran about their appeal and they’ll talk about freedom. Freedom to get away easily – at the drop of a hat – and visit somewhere new or familiar without having to book rooms or accommodation weeks in advance.

Looking at the amount of family’s climbing out of campervans with the family dog following close behind suggests this is the ideal way to escape from it all and take the family pet too.

The Volkswagen California 6.1 Coast may not be cheap but it’s hard to imagine a more well-thought-out, better-driving campervan. Mercedes-Benz have the Marco Polo but it’s even more expensive and isn’t as iconic as the VW.

Whether it’s a few days away with the family or just the two of you enjoying luxury festival-accommodation (remember those days?) you couldn’t really do any better than Volkswagen’s latest home-on-wheels – Just remember to check that weather forecast.