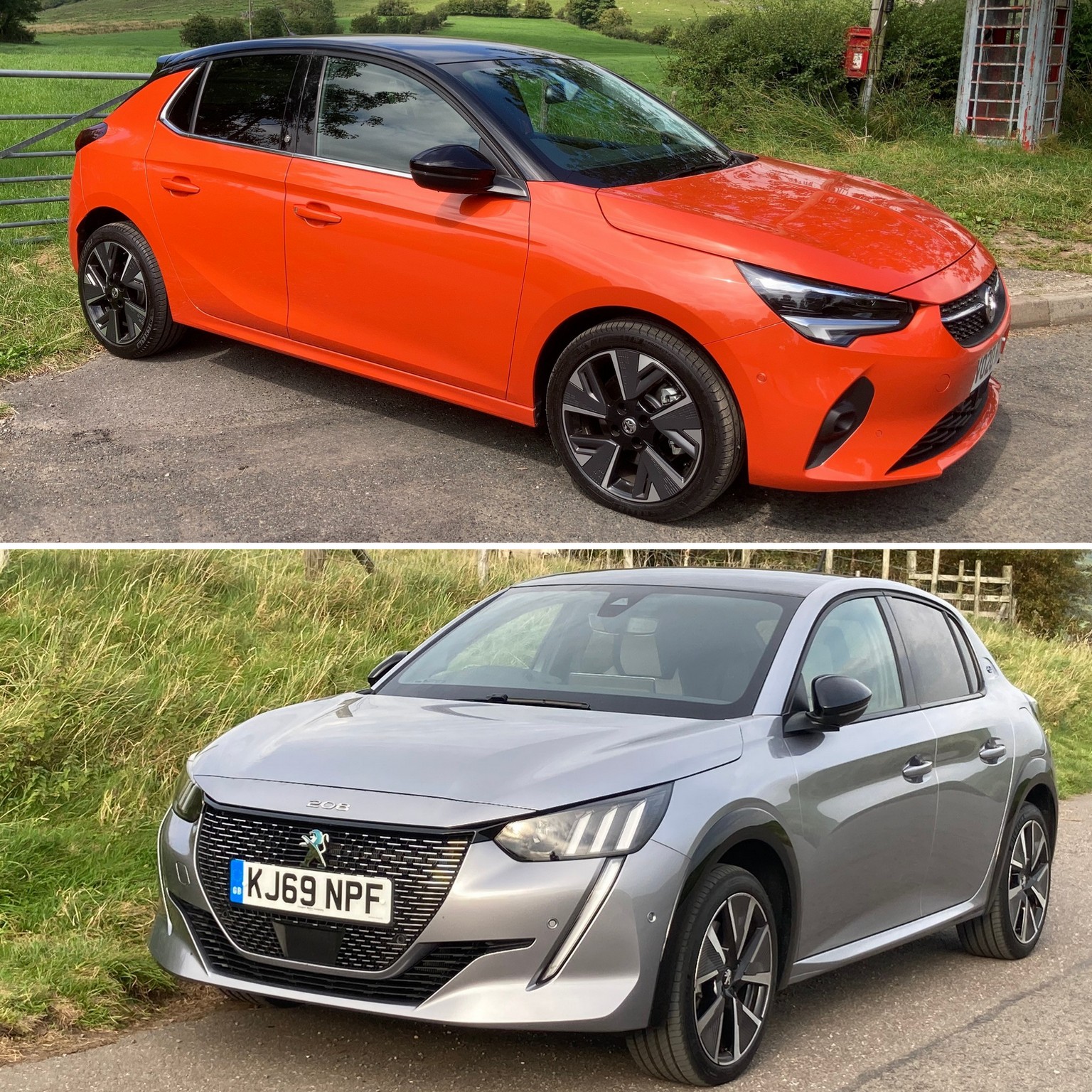 LET’S face it, 2020 was a wash-out and 2021 hasn’t had the best of starts. There isn’t much joy about as our choices – in every walk of life – have been severely curtailed.

However, for those lucky enough to be considering a new car to help lift the spirits, there is a huge choice of models and deals out there at the moment – and EVs are leading the charge.

Fully electric vehicles (EVs) are rising rapidly in popularity with sales up by more than 127% in the first 9 months of 2020 – despite COVID-19 hitting all car sales severely – and the majority of that rise comes from people choosing small to medium sized EVs for the first time.

Ideal for short commutes, city runs and basically every-day use, including the school run (remember those?), the small EV can provide excellent savings over equivalent fossil-burners – and you get to feel smug about saving the planet too.

Both Peugeot and Vauxhall offer small EVs in the shape of the Peugeot e-208 and the Vauxhall Corsa-e, but as both manufacturers are now part of the PSA Group, you’ll find they’re more than just siblings – they’re actually non-identical twins.

Both cars share the same platform with the same 50kWh battery, 100kW electric motor, 134 bhp and fixed-gear ratio auto gearbox. Both have a similar range of just over 200 miles and charging from a 7kW home-installed wall-box takes about 7.5 hours from 0 to 100%.

Fast-charging from a suitable 100kW charging point takes just 20 minutes to get you from 20% to 80% charge.

In a nutshell, the Vauxhall Corsa-e has a cleaner, more conventional look and the Peugeot e-208 is more stylized both inside and out – and while the price of the Corsa-e may appear to be less competitive, you’ll find it has more standard features than it’s similarly-priced sibling.

I’ve been driving the top spec Vauxhall Corsa-e Elite Nav Premium back-to back with the almost-top-spec e-208 GT and have to say it is very difficult to recommend one over the other.

If money was no object I would go for the Peugeot as it looks and feels a more premium product. The 208 has striking looks compared to the rather anonymous Corsa and while neither will set the world alight, the Peugeot at least sparks a little.

Inside is the same story. The Corsa-e is perfectly fine and a pleasant place to the sat but the e-208 looks and feels more special with its i-cockpit layout and those piano-key switches jutting out from the dashboard.

But here’s the rub: The Peugeot e-208 will set you back £32,975 (OTR, including government grant) while the Vauxhall Corsa-e Elite Nav can, at the time of writing, be had from just £30,045 OTR – and that includes a free home charging unit.

The Corsa-e gets a 10in touchscreen at this trim level and Apple CarPlay and Android Auto is standard across the range.

There’s nothing inside the Corsa-e that is going to wow you as it all looks rather predictable. Vauxhall have definitely played it safe here but there’s not much to dislike either – at least you still get conventional dials for the temperature controls, unlike in the Peugeot where you’ll be prodding at the touchscreen to turn the temp up.

The Peugeot e-208’s interior looks and feels superior – if you can live with the i-Cockpit layout which means setting the steering wheel low so you look over it, rather than through it. Personally, I don’t have a problem with it as I like the feel of the smaller steering wheel – but some people may find it a deal-breaker.

Space-wise, you’ll find the Peugeot has the larger capacity boot at over 300 litres, whereas the Vauxhall manages 267 litres. Space in the rear is similar in both cars, where 3 adults will struggle but 2 will be just fine.

As you would expect, the driving experience is very similar in both cars, which isn’t a bad thing because there is definitely fund to be had – although I found the stiffer suspension of the Vauxhall gave a slightly sportier ride and even on the 17in alloys it didn’t get clunky over rougher surfaces.

For anyone new to electric vehicles, the instant and uninterrupted acceleration will put a smile on their face and although both cars hit 62mph in around 8 seconds, it actually feels quicker.

Both cars have 3 driving modes: Eco, Normal and Sport. Eco provides 81bhp and can add up to 40 miles of range; Normal gives 107bhp, while Sport gives the full 134bhp – which is also available in the other two modes if you floor the throttle.

All three modes are perfectly acceptable for tootling around town, or even on the motorway, but you’ll probably want to leave it in Normal mode for most of the time as this provides more than enough clout without affecting range.

One problem I did encounter more in the Vauxhall than the Peugeot was an alarming amount of wheelspin that was easily invoked if you stepped on the throttle when pulling out at a junction, or just pulling away after exiting a roundabout. It was quite shocking at first but you soon adapt and learn to be feather-light on the accelerator in those situations.

Steering is surprisingly quick – especially in the Corsa-e – which makes those A-road blasts more enjoyable, although brake-feel is a little odd at first and something any EV driver needs to get used to. The regenerative braking in both cars is similar and is nothing like as aggressive in say, the Nissan Leaf where you can easily drive around using just one pedal.

Electric vehicles offer the driver an opportunity to alter their driving style to eek the most miles out of their vehicle and, for me, this is one of the benefits of owning a fully electric vehicle like the Vauxhall Corsa-e or the Peugeot e-208 – it puts some interest back into the daily drive.

This doesn’t mean you need to drive around like a milkman from the 1960’s. You can get a lot of driving pleasure from both these cars simply by appreciating the quiet, calm way they get down the road and that surge of effortless acceleration when you want to overtake. Put the gear-selector into “B” mode and marvel at being able to decelerate smoothly all the way down to a stop without having to touch the brakes – and be smug about the power you’ve put back into the battery by doing so.

Downhills now present opportunity whereas all they offered before was more wear on your brake pads.

It’s a brave new world out there on the roads and either of these superb small-to-medium EVs will allow you to enjoy it to the max. Whenever we can get out again, of course . . .