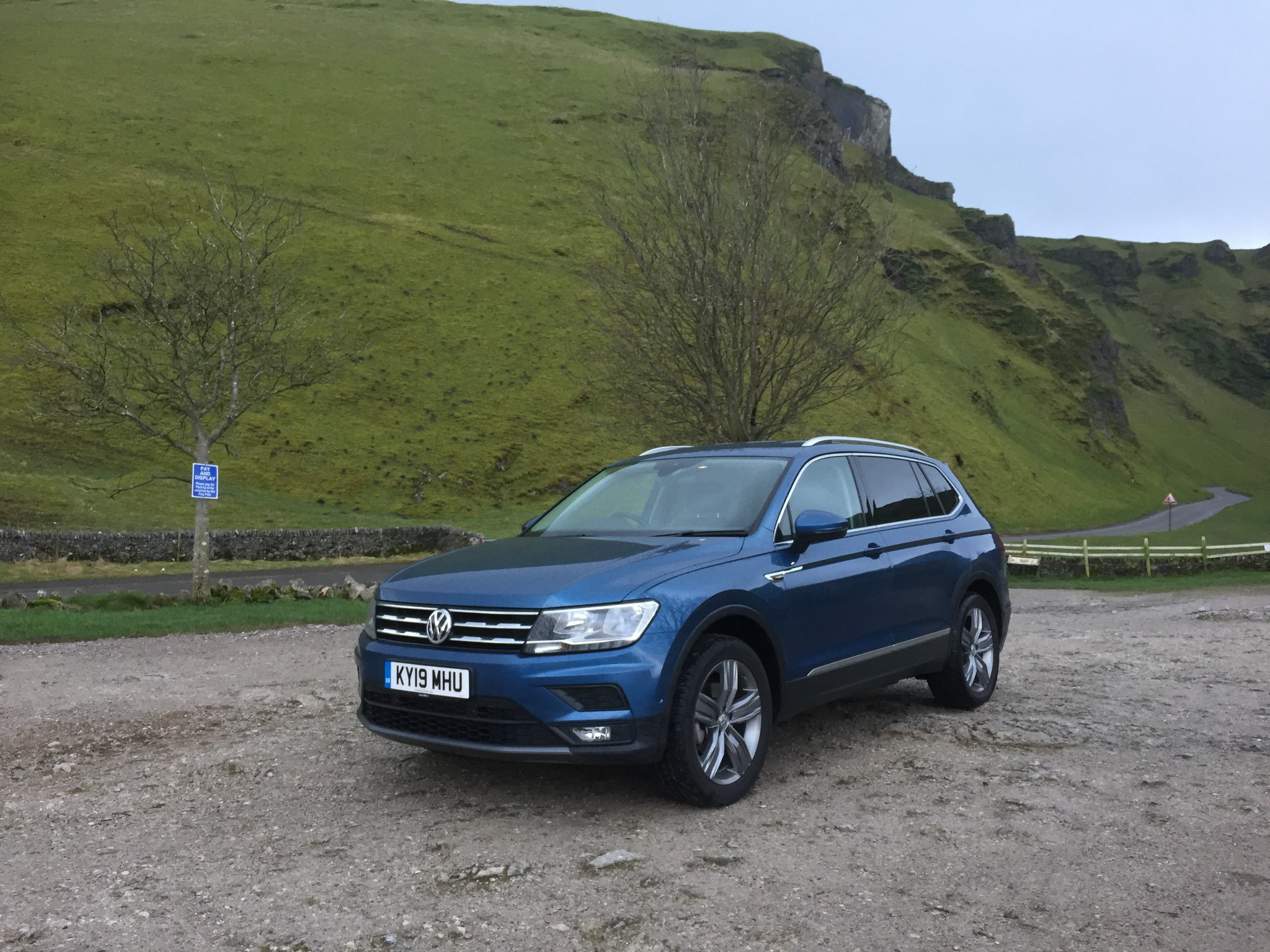 What is it?
The new Volkswagen Tiguan Allspace Match is a more spacious version of the standard Tiguan and designed for those with a bigger family or a bigger sense of adventure – or maybe both. A more stylish alternative to the traditional MPV, it’s 215mm longer than the standard Tiguan and offers to put an extra two backsides on seats as well as significantly increasing the boot-space when the rearmost seats are folded down.

There is the choice of a frugal 1.5 TSI petrol engine which chucks out 150PS and gives around 39 mpg, or a 2.0 diesel with the same power output – but more torque – and returns 50 mpg. The top two trim levels can also be optioned with a 200Ps diesel, giving around 40 mpg, but If you opt for the 7-speed DSG auto gearbox instead of the 6-speed manual, those mpg figures drop a little – but not much.

The DSG diesel can also be optioned with 4Motion all-wheel-drive, with the mpg figure for the 150PS dropping to around 40 mpg – so not bad for a 7-seat, spacious auto-SUV with maximum sure-footedness all-year round.

My review Tiguan Allspace is the Match model, in 7-seat, 2.0 diesel guise, fitted with a DSG gearbox and 4Motion AWD, starting from £35,195.

For that money you you’ll also be looking at the Skoda Kodiaq – a cousin of the Tiguan which offers just as much practicality for a little less dosh but doesn’t quite have the refinement of the Volkswagen, or the residuals.

There’s also the striking Peugeot 5008 and the all-new Kia Sorento which both offer 7 seats but the Peugeot’s styling, lack of AWD and I-cockpit layout may not suit everyone and the Kia starts at almost £39,000.

How does it look?

The Volkswagen Tiguan Allspace is not just longer than the standard Tiguan, it also has a subtly different look with lengthened rear doors, while the bonnet has also been raised at the front above the radiator grille to adapt the proportions to the longer overall length.

The roof has also been redesigned with structural lines being used for the first time instead of a smooth roof surface. Roof-bars are fitted as standard.

Overall, the effect may not immediately distinguish the Allspace from a standard Tiguan but the Allspace certainly has a little more presence, even in entry-level Match guise which comes standard with 17in alloys, silver anodised roof rails, chrome trim and tinted rear windows.

What’s the Inside Story?

Volkswagen rarely disappoint when it comes to interiors and the Tiguan Allspace is no exception with great quality materials, top-notch fit and finish, exceptional ergonomics and good visibility all-round.

The Titanium Black cloth seats in my Match model were very comfortable and easily adjustable – along with the reach and rake-adjustable steering wheel – to provide an excellent driving position.

The analogue dials of the dash are clear and easy to read while the 8in touchscreen infotainment system has 8 speakers and comes with Discover Sat Nav as standard as well as Bluetooth connectivity and a DAB radio. Car Net is included which gives Apple CarPlay and Android Auto functionality.

Three-zone climate control is also standard on the Match model, along with auto wipers and lights, traffic sign display and adaptive cruise control. There’s parking sensors front and rear and driver aids such as Park Assist, rear-view camera and high beam assist. There’s really not more you could wish for.

Rear passengers are well catered for with their own climate controls and enough head and leg room for a couple of six-footers. Three-up is more of a problem as the middle passenger will be short of head room – but 3 kids should be a doddle.

You can always put that third kid into one of the rearmost seats though and everyone then gets some elbow space. And it’s only really kids that will be comfortable getting into, sitting in and getting out of those two extra seats as access is awkward -even with the sliding middle row – but no more so than in the Allspace’s rivals.

With those two extra seats folded you’ll have 700 litres of luggage space and a whopping 1,775 litres with all rear seats folded. You can also fold the front passenger’s seat flat if you need to get in a grandfather clock (or such).

How does it go?

Out on the road the Volkswagen Tiguan Allspace drives just like the standard Tiguan – solidly and without any fuss. The 2.0 diesel pulls very well but there is noticeable turbo-lag, albeit something you quickly get used to and adapt accordingly.

The 7-speed DSG gearbox shifts intelligently and makes city driving much less stressful – as does the ride-height and excellent visibility.

But it’s out on the open road and motorway cruising where the Allspace comes into its own as the diesel feels refined and smooth with noise levels kept to a minimum. The adaptive cruise control proves its worth on longer journeys and is one of the smoother performers – not jumping on the brakes violently when another car pulls into your lane, like some systems can.

99% of Tiguan’s will never see a muddy field but if you think you may be the exception the Tiguan is also available in on-road and off-road versions. The latter combines an ‘off-road package’ together with special engine underbody protection that extends to the bumper. The off-road front section improves the vehicle’s ramp angle by seven degrees.

The Tiguan Allspace makes good on its promise of offering more space and comfort in a mid/large-sized family SUV. The fact you can specify those extra seats makes the Tiguan Allspace a more appealing alternative to the minibus-like MPVs out there.

It won’t get the heart racing when you take the Tiguan Allspace out for a drive but it should prove to be a well-built, reliable family wagon that majors in both comfort and ability. An excellent all-rounder.