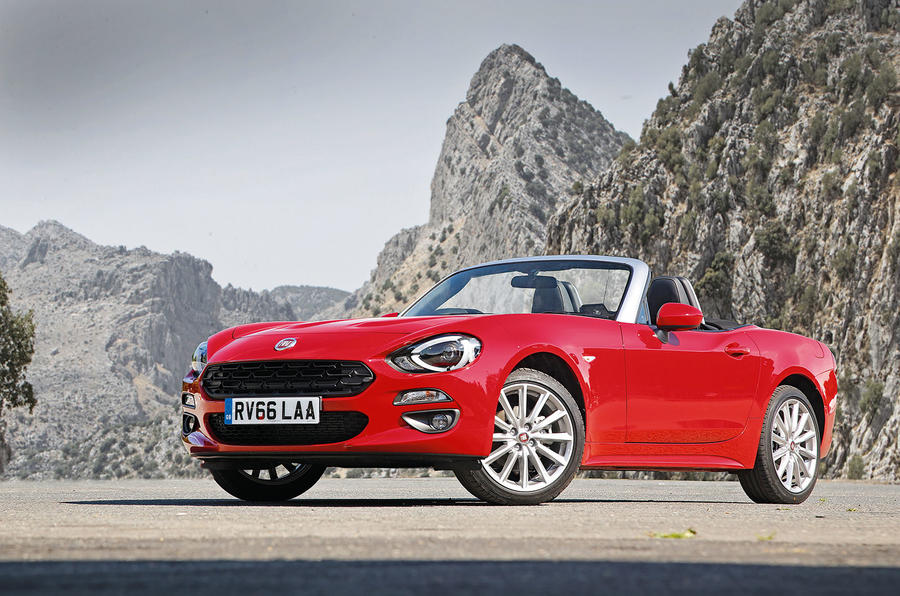 IF you are going to design a rear-wheel drive, 2-seater, rag-top sports car with a price-tag starting at less than £22,000 then you may as well base it on the best there is – and that is exactly what Fiat have done in creating their new 124 Spider.

That they have based it on the ever-popular Mazda MX-5 should come as no surprise as the Japanese rear-wheel drive wonder is better than ever in its new incarnation and all Fiat have had to do is Italianise it with a more retro look that harks back to the original 1966 Fiat 124 Spider.

Okay, there have also been some tweaks to the suspension and the MX-5’s naturally-aspirated engine has been replaced with Fiat’s own 1.4, 140bhp MultiAir turbocharged unit but other than that the Fiat 124 Spider is a Mazda MX-5 for those wanting  a little more Latin style. From the outside it’s definitely a people-pleaser. You’ll find strangers levitate toward it much the same way they would toward a cute puppy that just wants to play. It has a smiley front-end too rather than the squinty one of the MX-5 (which looks great too but isn’t as friendly). The scooped-out headlights give a nod to its predecessor as does the rear end which retains the rectangular lights and high, flat boot. She’s definitely a looker.

There are 3 trim levels to choose from – the 124 Spider Classica, Spider Lusso or Spider Lusso Plus with OTR prices ranging from £21,050 to £25,050 or £27,060 if you really need automatic transmission. All come with the 1.4 MultiAir 1.4 turbo engine which will return 44.1mpg on the combined cycle and will launch you to 60mph in just 7.5 seconds. If you want more power you will need to check out the Abarth model  which comes with 170bhp and will get you to 60mph in 6.8 seconds – but you’ll be paying just short of £30,000 for it and doesn’t look any prettier, just a little more aggressive.

Inside there is no point comparing the Fiat with the Mazda because apart from the badge on the steering wheel and upholstery finish they are virtually identical. Which is no bad thing as the MX-5 has always been a great place to sit. The leather upholstery on my Lusso Plus model looked and felt suitable for an Italian sports car as did the three main, hooded, dials with the dominant rev-counter set in the middle. The infotainment system is a doddle to use and thankfully has a centrally mounted rotary control to navigate through the menus which worked extremely well – maybe not up to BMW standard but still miles ahead of some touch-screen only systems.

All models come with LED rear lights, leather-covered steering wheel, air-con, cruise control and speed limiter, radio with Aux and USB inputs, Bluetooth connectivity, Keyless Go (start button) and alloy wheels – 16in on the Classica and 17in on the Lusso and Lusso Plus.

The Lusso trim level adds such things as fog lights, leather heated seats, a 7in touchscreen instead of 3in, 3D Sat Nav and DAB radio as well as rear parking sensors, a rear camera, keyless entry and auto climate control. Lusso Plus gives you LED headlights, auto wipers and auto lights along with a 9-speaker Bose sound system that has speakers integrated into the headrests.

You’ll find storage space is at a premium with no glove-box in front of your passenger and no door bins. There is a lockable cubby-hole between the seats, at the rear though and there are a couple of cup holders back there too, one of which can be moved to a hidden bracket positioned up-front on the passenger side of the transmission tunnel. The driving position is absolutely spot-on and you really can lower and raise the manual roof using only one hand – without having to get out of the car if you wish – and the hunkered down, legs-out seating position lets you know you’re in for some fun even though it does feel as though you’re backside is only a couple of inches from the tarmac. I found getting in and out easier than I’d envisioned thanks to well-weighted doors that open very wide.

A push of the Start button gets things moving but don’t expect the exhaust note to send a tingle down your spine as the soundtrack from the 1.4 turbo is disappointingly flat and doesn’t get much better at speed either with just a slight whistle from the turbo when you are pushing on.

Soundtrack apart, the little 1.4 turbo responds well above 2,500 revs but can feel a little sluggish below this as there is notable turbo-lag which you soon learn to avoid by keeping the revs a little higher between gear changes – not a problem you would have in the naturally-aspirated Mazda of course.

The car is still a pleasure to drive though and if you show it a winding country road you’ll have grin from ear to ear – if the weather is kind, of course. The steering is wonderfully weighted and precise, allowing you to place the car exactly where you want it and the gear change is satisfyingly snappy with a short throw that encourages you to press on. Keep those revs up and the Fiat 124 Spider feels every inch an Italian sports car. The suspension is, perhaps, slightly on the soft side but not a problem through the twisties and it certainly feels comfortable when you’re back in the city, handling the lumps and bumps well enough not to cause any concern.

The Fiat 124 Spider is not perfect – it lacks a little oomph for my liking – but it is still a very satisfying car to drive. It feels very well planted and even accelerating hard on corners I never felt the little Fiat begin to understeer – it seems to want to eat those fast bends up and that is what these cars are all about.

Of course, everything is better with the roof down and unfortunately for me I spent most of my time with the Spider in the rain, where I can report it handles very well with no drama at all. What a pity the options list doesn’t include “Unbroken Sunshine” . . .