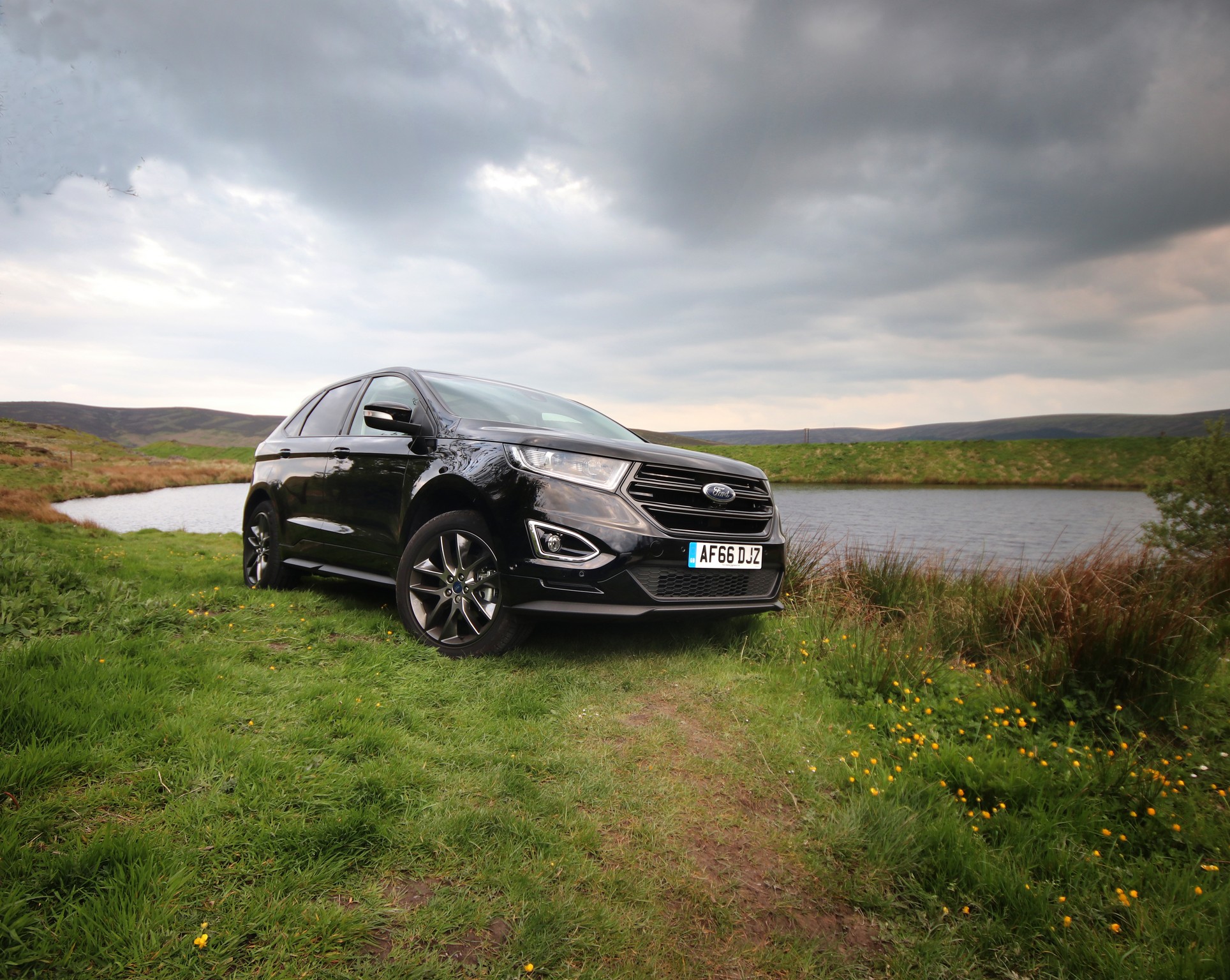 WHAT works for the Yanks doesn’t always work this side of the pond – take the Ford Explorer, for instance, or the idea that a reality-TV star may make a good head-of-state.

So, when Ford say they are bringing over their best-selling, large SUV – the Edge – you would be right to be sceptical. It has been around in the States since 2008 so why has it taken so long to bring it to Blighty?

The answer is, of course, market forces. Everyone and his aunt is looking to “move up” to an SUV at the moment and Ford have been somewhat lacking on the crossover vehicle front. Okay, there is the Kuga and the tiny EcoSport but for those wanting a large, Land Rover Discovery Sport-sized, 4WD beast then you needed to look elsewhere as the Ford Ranger doesn’t really cut it in the family-friendly stakes.

So, enter the Ford Edge – a large, premium SUV with full-time, Intelligent AWD and a roof you will need a step-ladder for if you want to clean it.

It is big – but not “American” big. i.e. it doesn’t look ridiculous on Tesco car park. In fact it’s not garish at all with a smart looking front end that has a large, open front grille and a Land Rover-style clamshell bonnet.

It is a little slab-sided but the roof swoops back enough to make the profile sporty – not Range Rover Evoque sporty but at least the rear windows are not narrow slits. The rear is dominated by a full-width red LED strip that joins the rear light clusters and is only broken in the middle by the blue oval of the Ford badge – it looks rather good too.

The dual chromed exhaust outlets on my Sport model (now called ST-Line) set the rear off nicely and are separated by a deep diffuser at the bottom. Engine choice is between just two 2-litre Duratorq diesels – the 180Ps which is mated to a 6-speed manual gearbox or the 210PS unit which uses the Powershift auto gearbox. All models get 4WD.

Inside is where the Ford Edge really impresses though with acres of space both up front and in the rear. Much has been made of the fact that there is more knee and head room in the back of the Edge than you get in the Audi Q7 or VW Touareg but you can’t help but feel that Ford may have missed a trick by not optioning a 3rd row of seats to make the Edge a 7-seater.

However, for the vast majority of potential buyers the 5-seats will be enough – and your rear passengers will reap the benefits as even 6-footers can easily be accommodated and the Edge is one of only a handful of cars where 3 rear passengers can get comfy on longer journeys. They can even recline the backrests a few more degrees if they wish to stretch out. Boot space is outstanding at over 600 litres with the seats up and with a push of a button you can drop those seats to give a max load of 1,847 litres – although you won’t be able to see out of the back window. Loading is easy too as there is no lip to negotiate and those rear seats fold almost totally flat.

Up front there is also plenty of space for two people and loads of storage space for “stuff”. The only thing lacking is a premium feel.

The cabin is a nice place to sit with very comfortable seats and a good driving position but it just doesn’t have the wow factor that you get in the Mercedes GLC, for instance. The plastics used are decent but not outstanding and the switchgear is good but not imaginative in any way and while the infotainment screen is clear and sharp it’s operating system is a little laggy and non-intuitive. Don’t get me wrong – there is nothing terrible or unusable in here and if you’ve ever sat in a Ford Galaxy MPV and thought it was a nice place to be, then you’ll be happy here too.

Specification is decent though, with even the base Zetec model getting Traffic Sign Recognition, Lane-Keep Assist, Active City Stop with Pedestrian Recognition, Dual Zone Temperature Control, Electric Parking Brake and even Active Noise Control which cancels out unwanted noises in the cabin – much like noise-cancelling headphones. I found it works very well too as the Ford Edge was surprisingly quiet out on the road – even at speed. 19in alloy wheels are also standard, as are auto headlights (including auto hi-beam) and auto wipers. A rear view camera, Quickclear heated windscreen, rear privacy glass and a reversing camera are also included as well as a DAB radio/CD with SYNC 3 and Voice Control.

Driving the Ford Edge is an absolute pleasure. I had a 4-hour journey down to Bedfordshire with Mrs. B which, we both agreed, proved to be much less taxing than we had expected and this was in no small way due to the Edge’s cossetting ability. The 210 PS diesel provided excellent cruising ability with plenty of poke when needed for overtakes. The auto gearbox isn’t the most responsive but was up to the job, as was the upgraded Sony infotainment system that also includes Sony’s own Sat Nav.

On one of the hottest days of the year the climate-controlled front seats were a boon. The optional adaptive cruise control worked very well and as mentioned earlier, the Edge is a quiet car to travel in with very little road noise and virtually no wind noise.

The intelligent 4WD goes unnoticed most of the time – as it should – and as I didn’t go off-road very far I can only say that the Edge feels very secure when trapping on a bit around A-roads. It does stay fairly flat through the corners and I didn’t manage to induce any understeer. It always felt more on the comfy side than sporting, largely due to the lightness of steering but this is expected on such a large family SUV and doesn’t detract from the overall package.

Overall the Ford Edge is an impressive package that’s great to drive – especially with the auto gearbox. I achieved just over 40 mpg, which ain’t bad for a 2-tonne SUV. It is a little pricey though for the model you will want – the Titanium; but if you can negotiate the price down a tad it could “Edge” it over the opposition.