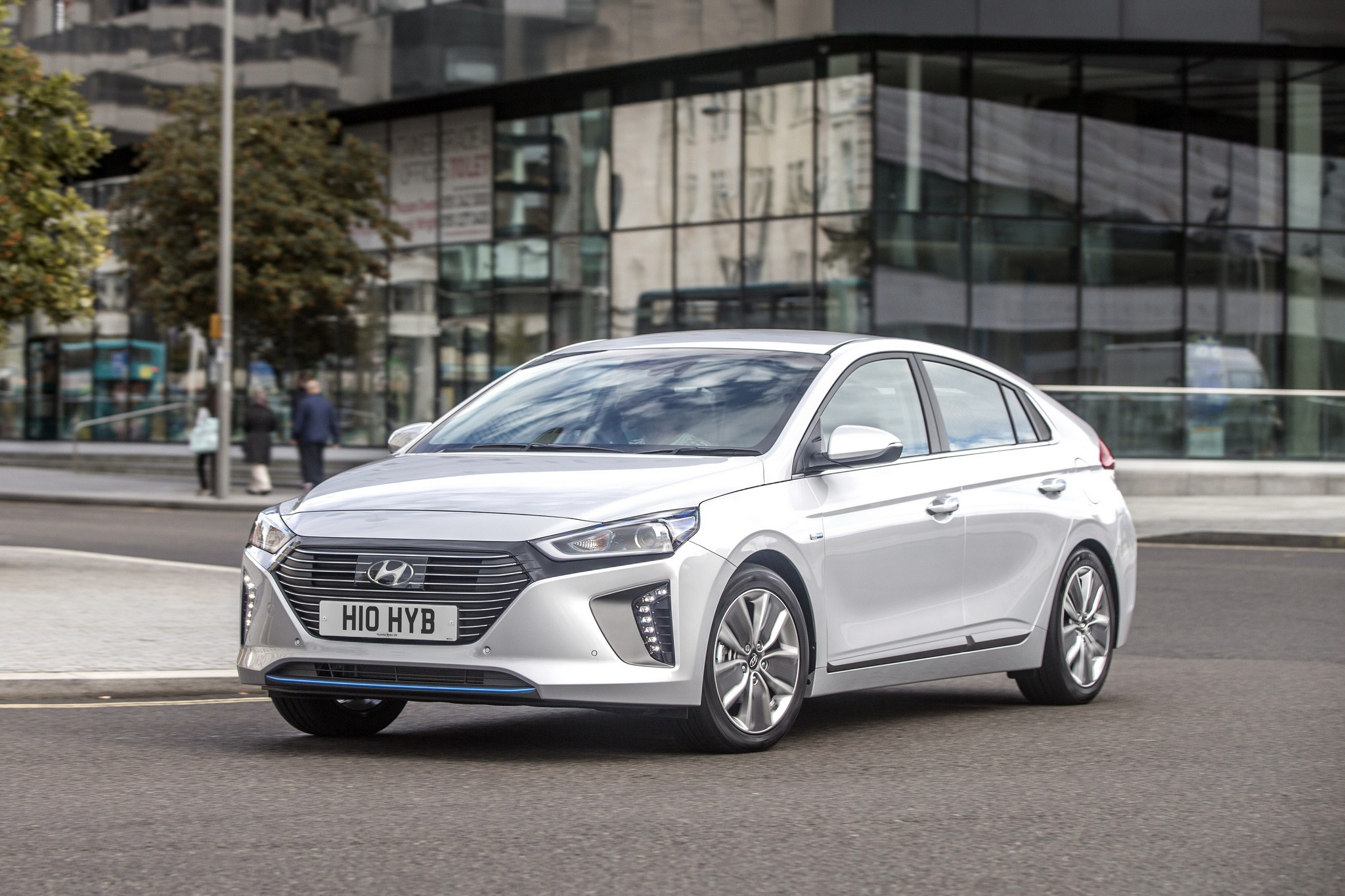 Hyundai’s foray into the world of hybrid vehicles starts with the aggressively-priced Ioniq mid-sized hatchback which takes on the all-conquering Toyota Prius – and on the face of it gives Toyota a bloody nose when it comes to pricing, being around £4,000 cheaper spec-for-spec than its Japanese rival.

Available as a hybrid or an all-out electric vehicle, the Ioniq is also soon to be available as a plug-in hybrid electric vehicle (PHEV) which means Hyundai will have all the bases covered – a smart move when you consider the negativity surrounding diesel vehicles at the moment and the push toward no-emission vehicles in general.

Looking more like a conventional 5-door hatchback than its rivals, the Hyundai Ioniq doesn’t shout “hybrid vehicle” at you quite so loudly as the highly-stylised Toyota Prius or the BMW i3 although the split rear screen does give the game away a little. It is a smart-looking car with a bold, open front and swooping roofline that falls away to the rear quickly enough to make its profile look sporty. Comparisons to the Prius are inevitable but to be fair the Hyundai Ioniq should be seen as an alternative to any mid-sized family hatch whether it’s a hybrid or not.

Available in three trim levels, SE, Premium or Premium SE, the Hyundai Ioniq starts at £20,585 OTR and rises to £24,185 for the Premium SE which I have been driving. All 3 have the same power unit which consists of a 1.6 GDi petrol engine giving 105 PS combined with a high-torque electric motor providing 42 PS which draws power from a 1.56 kWH lithium-ion polymer battery.

You can expect around 32 miles on electric alone but being a hybrid vehicle you needn’t worry about range. As is usual in a hybrid, the car will operate in EV mode only until you need more power when the petrol engine will kick in – almost silently so – or the battery needs to be topped up in which case the engine will provide power and charging simultaneously.

Charging is also provided when braking and on descents so, basically, you don’t need to worry about anything – the Ioniq takes care of power delivery combinations for you and will even provide some slick graphics on the 8in screen to show you where power is being drawn from as well as the battery status and MPG. The interior is where the Ioniq loses out somewhat to the Prius. The sea of grey plastic spreading across the dash and onto the doors is a little bland, although the plastics used are of decent quality. I particularly liked the shape and feel of the leather-covered, multi-function steering wheel which is sportingly small and flat-bottomed.

Overall, you won’t be disappointed with the interior of the Ioniq as it feels light and airy with a good driving position. The view through the rear window is a little restricted but, like the lack of a rear wiper, it never became an issue. The switchgear is all sensibly laid out and very intuitive to use with buttons feeling sturdy in use. The fully digital dash is very clear and configurable as well as impressive to look at.

It’s good to see Hyundai have placed a row of buttons beneath the infotainment screen, giving instant access to common functions like radio, media, phone, volume and navigation so there is no need to be searching around sub-menus on the screen.

Likewise, there are buttons for the dual-zone air con and heating/ventilation lower down in the dash – my wife was particularly impressed by the button which selects “driver only” for the air con. Space in the rear is generous, although that sloping roof line means tall passengers have to duck a little lower when getting in and out, but once in, knee and head room is good. Although 3 adults wouldn’t want to travel too far due to lack of elbow room, 3 kids should be fine.

Boot space is above average for a mid-sized hatchback at 443 litres and a whopping 1,505 litres with the seats down. The loading lip is quite high though so be prepared for some lifting. Where the Hyundai Ioniq deals the opposition a knockout punch though is the driving experience; it really is very good and is helped enormously by the dual-clutch automatic gearbox which is smooth and quiet – unlike the rather whiney CVT gearbox in the Toyota Prius. The ride is spot on too with virtually all road-imperfections being dealt with comfortably.

The Ioniq has two driving modes, the default “Eco” and, if you flick the gearstick to one side, “Sport”. Sport heightens throttle response and the effect is immediately noticeable as the car leaps forward and feels eager to get on with things.

The auto unit is very responsive and the Ioniq feels genuinely quick – not Golf GTi quick but I was pleasantly surprised by how playful this mid-sized hybrid became although faster corners will result in understeer and some body roll. However, the Ioniq is not meant to be a racer and the light steering underlines the fact this this is a car for mainly town and city use.

Fuel economy is impressive – I managed 59.7 mpg which included a motorway trip to Nottingham and back to pick up my son from University – so the car was also packed to the gills on the way home but suffered no performance issues at all. On the motorway the Hyundai Ioniq was a solid and comfortable cruiser with the only noise coming from wind around the door mirrors and some tyre noise but overall it was a pleasant experience and we both felt we could travel a long way indeed in the Ioniq and not become fatigued.

All in all an impressive hybrid debut from Hyundai that matches or betters the opposition in almost every department – and at a price that is truly remarkable.