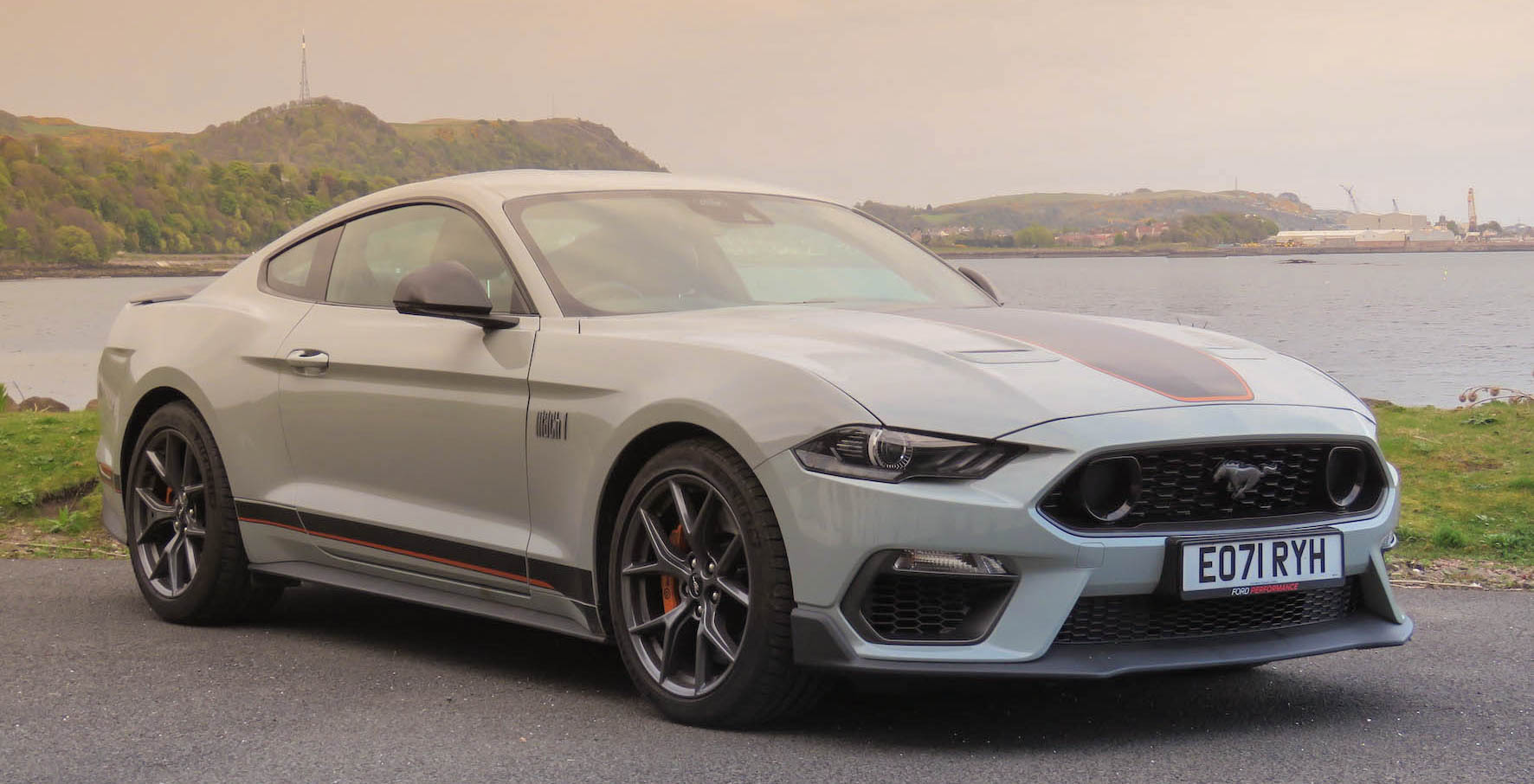 THE Ford Mustang Mach 1 is not a car for those who wish to go quietly and anonymously about their business. It’s the exact opposite. If you don’t like perfect strangers accosting you at the petrol station with a hundred questions about your car, or neighbours who suddenly appear on your driveway just “wanting a chat”, then don’t buy the Mustang Mach 1. It attracts a LOT of attention.

It’s not like you can slip away quietly either. Not with a thumping great 5.0-litre, V8 under the bonnet. Sure, there is a “Quiet” mode for that thunderous exhaust, but it’s a bit like being in the toilets at a Rammstein gig – still loud but not ear-bleedingly so.

My Mustang Mach 1 came equipped with the Appearance Pack which consists of Fighter Jet Grey paint along with Satin Black hood and side stripes with reflective orange accents. There’s also orange 6-pot Brembo brake callipers and orange interior trim touches. It is the best colour combo for the Mach 1 and worth the extra £1,400.

But whatever colour you choose, you will own a fantastic-looking sports coupe that not only has an iconic badge on the front, but an iconic silhouette that has been almost 60 years in the making.

Over a standard Mustang GT, you also get stiffer front and rear sway bars, 6-piston Brembo brakes, a Torsen limited slip diff, a more efficient radiator and the rear subframe from the Mustang Shelby GT500, along with MagnaRide active dampers to help keep everything tight and pointy. The rear diffuser is also from the GT500.

It all adds up to a more focused wild horse that generates 22% more downforce than the GT version. It’ll still give you a kicking if you show no respect, though.

My Mustang came with a 6-speed, rev-matching manual gearbox (taken from the Shelby GT350) that allows you keep the loud pedal depressed while shifting gear for even more drama as well as quicker shifts. The hard, cue-ball-like gearknob is a piece of minimalist art in itself and feels very good in the hand.

If you want to spend an extra £2k on the 10-speed automatic then go ahead – there’s no shame in wanting to concentrate solely on the steering. With 10-speeds to think about, it may get a little hesitant when tootling around town but for power-sprints along A and B Roads it makes a good case for itself.

Once you’re up and away in the Mustang Mach 1 you’ll feel the weight of the thing. This is an all-American muscle car after all, not a lightweight European ‘bahn-stormer. However, after a few minutes and a few corners you come to realise this latest incarnation of the Mustang is very capable of handling the twisties – and she suddenly seems not so hefty after all.

It’s been decades since you could describe a Ford Mustang as “only good in a straight line” but the Mach 1 takes things to a new level and feels comfortably more capable than its GT sibling. The gearchange is especially noteworthy; crisp, short, precise and satisfyingly weighty in its engagement.

Steering feel is very good – especially in Sport+ mode where it is more responsive too. Not quite Alfa Romeo Giulia quick, but more than capable of helping to stick a smile to your face.

Perhaps most surprising of all is how the Mustang Mach 1 rides. The MagnaRide adaptive dampers do a terrific job of handling our less-than ideal public roads. It’s bordering on the “cosseting” sometimes but always inspires confidence when chucking the car around. Don’t get carried away though as the laws of physics still apply to a Mustang; hurl it too fast around a corner and the Mach 1’s mass will inevitably call the shots.

And all this while enjoying the burble and snort of that wonderful, naturally-aspirated V8. I was never in the appropriate location to try out the Launch Control feature or the Line-lock feature that allows you spin up the rear wheels while having the front brakes locked. All show-offy stuff that’s nice to have but only sensible for track days.

It’s a pity Ford don’t offer its UK customers the Handling Package which makes the Mustang Mach 1 even more driver-focused with more down-force and adjustable suspension; but really, it’s more than enough muscle for anyone who’s ever dreamt of owning an iconic American muscle-car.

Do I really need to tell you about mpg? Okay, for the 3 people interested, I averaged 22 in the week I had it – which tells you I (mostly) didn’t hoon-around in it. My 60-mile daily commute is mostly dual-carriageway with some B-road. If you want the full Mustang experience every day, expect around 12 mpg.

And the inside? Very good actually. The front seats are some of the best you will every sit in for comfort and support, while they look very cool. It’s mostly lifted straight from the lesser GT model but with some Mach 1 extras, like an aluminium-trimmed instrument panel and the car’s chassis number engraved on a plate, facing your passenger.

The infotainment screen looks a little behind rivals when it comes to quality – I found the low-res rear-view camera particularly disappointing. The sound-system itself is very good – but who needs it when there’s a V8 under the bonnet?

The steering wheel feels chunky enough but is a little too busy with buttons. However, the aluminium flick-switches in the lower-dash look cool – until you realise they only work one-way. If you miss a setting you have to scroll through everything again to select what you want.

The 12-inch, fully-digital dash is crisp and very configurable. It changes automatically depending on which mode you’ve selected. And there are a few of them: Normal, Snow, Sport, Track or Drag Strip. There are lots of telemetry setting to play around in for Track and Drag Strip which should keep the most avid petrol-head happy at the track.

The two rear seats are, surprisingly, comfortable and not too difficult to get in and out of if you’re reasonably spritely, while the boot is a decent size too at 408 litres.

There’s much to love about the Ford Mustang Mach1 and while UK Mustang fans have been denied the pumped-up, adrenaline-filled Shelby Mustangs, the Mach1 fills the gap nicely between the GT and those “ultimate” Mustangs. It feels special, looks stunning and is a privilege to ride – Much like any thoroughbred wild horse.