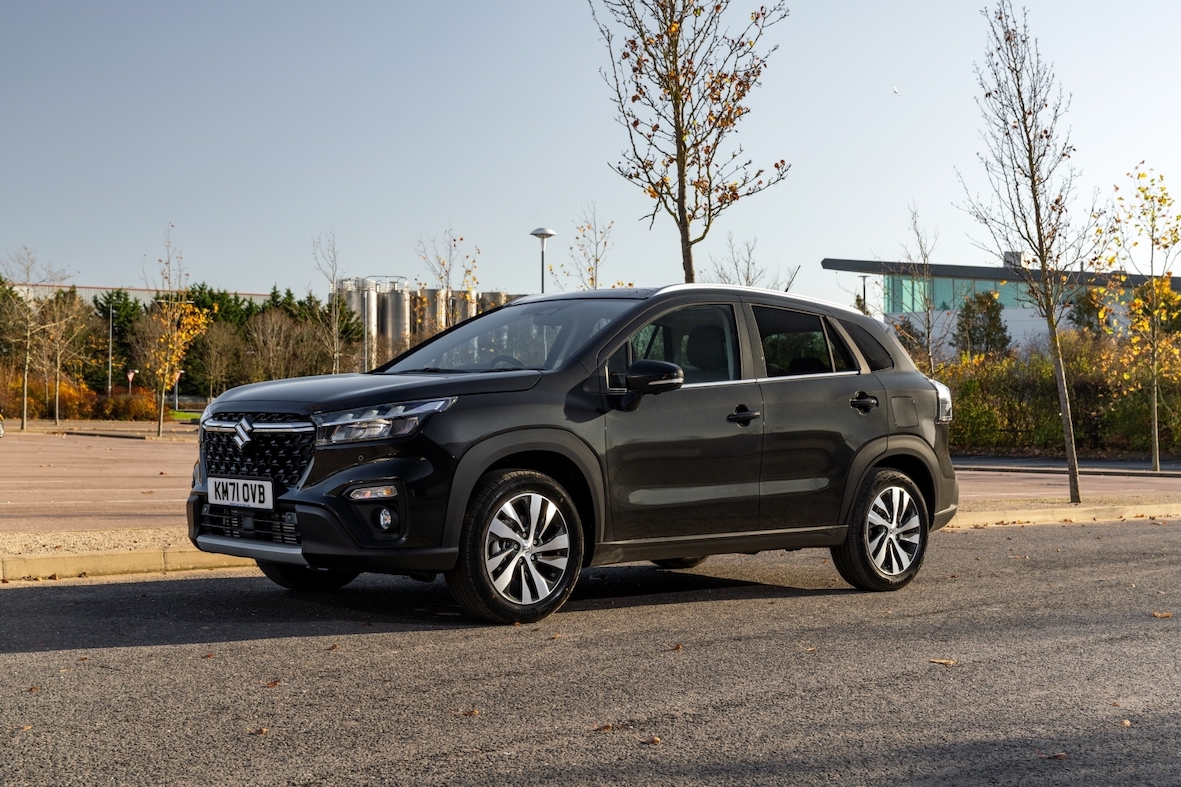 SUZUKI is always a manufacturer you can rely on when it comes to value for money with no compromise on tech – especially if you’re after a reliable 4×4 that won’t break the bank.

Sitting between the Vitara and the Across is the new Suzuki S-Cross that is a perfectly-sized SUV for the growing family. And yes, it’s available with the added security and safety of ALLGRIP Select 4WD.

It may not be quite so capable off-road as the Vitara or the Across (a Toyota RAV-4 in all but badge) but the S-Cross isn’t meant to be. This is a 4WD for family use with the added benefit that should the weather turn bad or you find yourself picking up the kids from a muddy festival, then you’re not going to be stuck in a bad situation.

The S-Cross is more focused on comfort, practicality, ease-of-use and every-day running about in town, while being a decent motorway cruiser too. It’s the 4×4 for everyone, and while not quite so cute as the Jimny, it’s infinitely more practical and much better to live with.

Suzuki don’t befuddle your mind with endless options which means you have a choice of just 2 S-Cross models: the 2-wheel drive Motion, from £24,999 or the ALLGRIP Ultra, from £29,799. If you want to replace the 6-speed manual gearbox with a 6-speed automatic, then add another £1,350.

Interestingly, the SX4 part of the S-Cross name has now been dropped in all of Suzuki’s brochures and website. However, it still appears on the rear badge, just above the larger “S-cross” badge. Maybe it’s there for the benefit of Suzuki’s loyal fan-base or as a reminder of the S-Cross’s beginnings.

Each model is equipped with the excellent 1.4 Boosterjet turbo petrol engine that provides 129 PS and 235Nm of torque, along with a 48V mild-hybrid system that provides a little extra power when needed as well as helping keep fuel consumption down. You can expect around 53 mpg from the FWD Motion model, while the AWD Ultra model should do around 48 mpg (WLTP Combined figures). I managed just over 46 mpg in the automatic Ultra model I had on test, so I expect the official figures are quite accurate.

When it comes to kerb-appeal I think the new S-Cross is a definite improvement on the outgoing model with an altogether more appealing open-grilled front end with snazzier 3-LED position beams in both the front and rear light clusters. It also looks more rugged than the old model, which was more “Crossover” than outright SUV. The new S-Cross boasts bolder, squarer wheel-arch trims and heavier-styled front and rear bumpers.

And yet, the S-Cross still remains somewhat anonymous when it comes to mid-sized SUVs. Maybe it was just the Titan Dark Grey paintwork. Energetic Red or White would be my own choice and they both lift the appeal.

Inside, there are no surprises – a mixture of soft materials on the higher surfaces and some hard, not-so-nice materials lower down. It feels spacious though and the modern layout is cleaner so the whole cabin feels quite airy.

I like the dash layout with dedicated controls for the climate. The simple, clear main dials are easy to read with a smart LED read-out in-between that is fully-configurable. It can even show generated G-forces . . .

The only immediate difference between the two trim-levels inside is that the Motion gets a 7in infotainment screen while the Ultra gets 9 inches. Both, however get wireless Apple CarPlay and Android Auto, which is a bargain in this price bracket.

Sure, the interior may not be as appealing as some of its rivals, like the Nissan Qashqai or Peugeot 3008, but you’ll find the Suzuki S-Cross is not only stuffed with tech and driver-aids but also leaves your bank balance in better condition.

The Ultra adds ALLGRIP 4WD, leather seat upholstery, nicer 17in alloys, a 360-degree camera, Sat Nav, the larger infotainment screen and a front centre speaker. Oh, and a double sliding panoramic sunroof. Price all that up at any other dealership and you’d be looking at prices north of £35k . . . easily.

All-in-all it’s a decent place to be sat. The driving position is good, with plenty of adjustment in both seat and wheel, while visibility is decent too. Rear passengers get surprisingly good legroom while headroom is just okay. Anyone over 5ft 11in might struggle thanks to that sloping roofline and panoramic sunroof. Boot space is good at 430 litres.

So, the catch must be that the new Suzuki S-Cross is only so-so to drive then? Actually, no.

The 1.4 Boosterjet has always been a well-respected unit and along with the relatively lightness of the new S-Cross (just 1,330kg for the 4WD version) you’ll find the Suzuki is eager to get going and doesn’t like to hang around once on the move, either.

It’s not quite “sporty”, but there is definitely some fun to be had – probably more than you might first expect. I know I was surprised by just how lively the S-Cross felt straight from the off.

The steering is very well weighted with none of the vagueness you find on some rivals. There are decent-sized paddle-shifters on the auto models too, allowing you to select “Sport” mode from the centre-console rotary selector and then having some fun on the B-road twisties.

The auto box is very keen to drop a gear when you hit the accelerator for overtaking; which can catch you out at first but is something you soon get used to and a more subtle jab of the pedal is usually enough to get you past without drama.

The 17in wheels give a pleasant ride that never gets jiggly or thumping even on the worst pock-marked roads. I can imagine most people would be happy with the way the S-Cross handles our roads – smoothing out most lumps and bumps easily.

The ALLGRIP Drive Mode Select function also offers a “Snow” setting along with “Sport”. Just a push on the selector takes you back to the “Auto” mode for normal driving. There’s also a “Lock” button for any instances where you need to lock the car into permanent 4-wheel drive with maximum torque being delivered to the rear wheels.

In the car’s normal mode, it will zip around nicely using just front-wheel drive and only bring in the rear drive if the car senses grip is being lost or stability would be improved with all 4 wheels being driven.

I took a 600-mile round trip in the Suzuki S-Cross that showed the car to be an accomplished cruiser too. Wind noise was noticeable at motorway speeds but you wouldn’t call it intrusive. The seats proved to be supportive and perfectly fine for such a long journey, while the Apple CarPlay and use of Google Maps for navigation and real-time traffic updates, proved unbeatable.

The adaptive cruise-control worked well and took a lot of the strain out of such a long journey. It appeared to be more intelligent than some systems too – not allowing undertakes, not slamming on the breaks when a car cuts in 30-yards ahead of you, etc.

The new Suzuki S-Cross is typically Suzuki – honest and reliable with many standard features that you would pay extra for from other manufacturers. It won’t try to dazzle you with unnecessary bling, like huge alloys that look nice but add nothing practical to the package. You get what you want and some things that Suzuki think you need. It all makes owning the S-Cross a pleasant and safe experience.