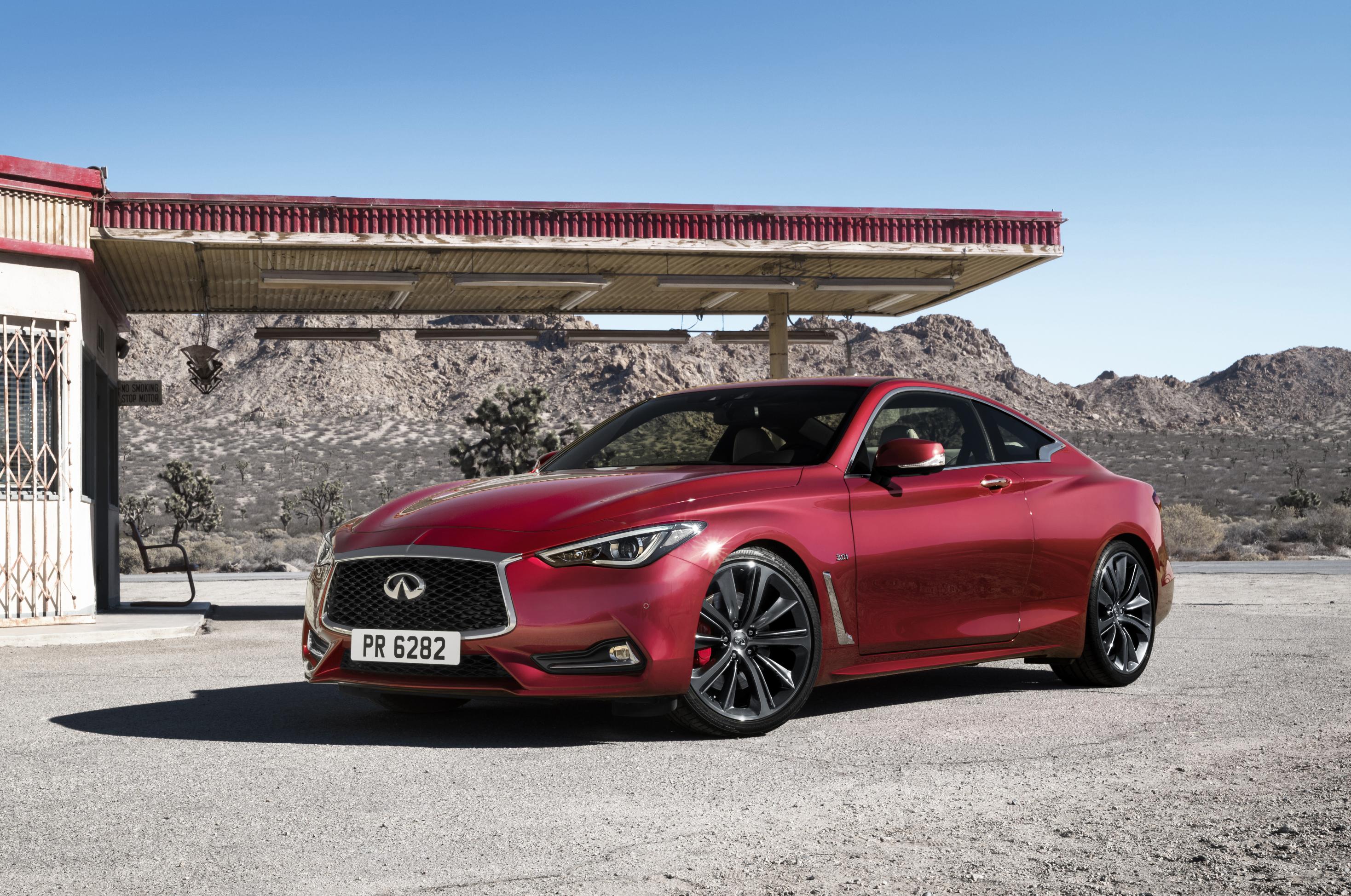 IN a world now dominated by the SUV I must say that the Infiniti Q60S felt like a breath of fresh air when it arrived on my doorstep – a good looking, sleek coupe whose looks are, thankfully, matched by its performance.

A replacement for the under-rated Infiniti G37 coupe, this V6-powered Q60S goes up against some stiff German competition in the shape of the new Audi A5, the BMW 4-Series Coupe and the Mercedes-Benz E-Class Coupe. Good thing it’s a bit of a looker then . . .

Like another of its rivals – the striking Lexus RC – the new Infiniti Q60 turns heads when viewed from any angle; not just because it’s such a rare sight on our roads but because it is beautifully proportioned and manages to look svelte despite its bulging wheel arches. The Q60’s Dynamic Sunstone Red metallic paint certainly helps here – but bear in mind it is a £1,090 option. The Infiniti open-mouthed grille is there which looks imposing but not bordering on the ridiculous like, say, in the Lexus RX450h and the top of the grille sweeps pleasingly into the leading edge of the headlights.

Deeply sculpted sides and the sharply-raked roof lead to the bulging hind-quarters below that crescent-cut side window which appears to cut into the D-Pillar. It’s all very flash but it works well and the sense of movement-when-standing-still is definitely there. It’s not just the skin which is greatly improved either; there’s some serious tech onboard including a new digitally-adaptive, steering system which is proving to be little controversial but which I had no real problem with.

Engine choice is limited to just two petrol units – either a 2.0-litre, 4 cylinder, turbocharged unit which produces 211 PS and drives the rear wheels on the Q60, or the Q60S which has a V6 3.0-litre, twin-turbo engine which produces 405 PS and an impressive 475 Nm of torque. All four wheels are driven if you go with the V6 but whichever engine you choose you’ll get a 7-speed automatic gearbox. The Q60S also gets some handling upgrades which include electronic controlled independent, double wishbone suspension (Dynamic Digital Suspension), larger front and rear brake discs as well as that Direct Adaptive Steering (which can be optioned on the Q60 Sport Tech model).

There are four trim levels: Premium, Premium Tech, Sport and Sport Tech with OTR prices starting at £34,300 for the 2.0t Q60 Premium and rising all the way to £47,235 for the Q60S Sport Tech which is the model I have been driving. Inside, the Q60S gets aluminium pedals and foot-rest, carbon-fibre trim and, if you’re feeling flush, the option to fit Silver Optic Fibre interior trim with Monaco Red or Gallery White semi-analine leather upholstery. However, I found the standard black semi-analine leather upholstery to be very smart-looking and well-finished so I probably wouldn’t bother. Generously, this is also standard fit across the entire range. Inside, the Q60S doesn’t disappoint with a lavish interior that rivals anything the German premium bands can offer – it may not be as logically laid-out but the attention to detail and quality of materials is right up there, plus a certain flair that you may find lacking in the Audi A5 or BMW 4-Series.

For instance the Q60 gets two touchscreens – an 8in screen mounted just above a 7in screen that looks impressive but is perhaps a little unnecessary. After all, the single German units are just as functional – and even a little easier to navigate – but they do have an “afterthought” look about them. The Q60’s screens are integrated perfectly into the centre console and look altogether classier. I’m not a big fan of carbon-fibre trim – whether it is fake or not – but the trim in the Q60S doesn’t appear to be out of place or too desperate next to the double-stitched leather. It also has a lovely mauve/purplish tint to it that matches the colours in the main instruments very well.

Sink into the deeply-bolstered, 8-way adjustable front sports seat and you’ll find the driving position is spot-on for a sports coupe with your knees slightly bent and the auto-gearstick falling naturally to hand. It is a very sporty driving position, enhanced by the raised central transmission tunnel and I would say it feels markedly sportier than both the Audi A5 and the BMW 4-Series. It feels more like a Jaguar driving position, albeit the XE rather than the F-Type. No bad thing then. Visibility is very good all around, which is a little surprising for a sports coupe as you usually suffer when looking through the rear – but not in the Q60.

The traditional twin dials of the main instrument cluster are clear and pleasant to read, while the 5in TFT colour display between them is multi-configurable and easy to use.

The multi-function, leather-bound steering wheel is another plus, being lovely to hold and is easily adjustable for rake and reach thanks to an electronic joy-stick on the side of the steering column. Rear access is a little awkward – fold the front seat forward and hold onto the latch while the seat electronically slides (slowly) forward. It never seems to go forward enough though for easy access and once you’re in you have to wait for that seat to . . . slide . . . back into place . . . again . . .

There are just two seats in the rear – but they are they comfy, being well-shaped and leant-back a little. Access to the Isofix anchor points is also easy but you will have to lean-in at an awkward angle to fix any child seats. Leg room is also good for a coupe but headroom is restricted by that steeply-raked roof so taller passengers may find themselves stooping a little while sat.

Boot space is perfectly acceptable for a sporting coupe at 342 litres – plenty of room for a couple of cases or some golf clubs. But not both.

However, when it comes to sporting coupes you may have the sharp looks and interior comfort but if the car fails to thrill you on the road then you may have well bought a decent 3-door hatchback. With 400 horses on tap and all-wheel-drive the Infiniti Q60S manages to tick the “thrill” box easily with rapid acceleration and a smoothness to the (adaptive) transmission that may have you thinking the 7-speed auto is actually a whine-less CVT.

Disappointingly, it’s a little TOO civilised for me in the cabin and where you’re looking forward to the roar and pop of the 3.0-litre, twin-turbo, 6-cylinder engine you just get a “thrum” which only becomes a little louder as you hit the rev limit. I tried putting the windows down but it hardly made any difference at all. I accept that many may list this under “benefits” though – the car draws enough attention as it is without announcing itself in advance.

The chassis is wonderfully supple and with the benefit of AWD the Q60S is a lot of fun around the corners. Its ride is surprisingly good too – even set in Sport+ mode bumps and troughs are dealt with without drama – much like you would expect from a GT rather than a sporting coupe. Then there is that fly-by-wire steering which some have said can be “unnerving”.  It certainly feels a little different at first but nowhere near unnerving. It’s capable of making 1000 adjustments every second to your inputs but it’s not something you’re really aware of. At first you get the impression it may be exaggerating some inputs, particularly in sharper corners but to me it just felt like a particularly quick “quick-steering” rack and took just a few minutes to adjust to. The feel of the steering can be adjusted slightly via the infotainment screen. It has a Dynamic and Dynamic+ setting. Neither made much of a difference in my opinion but then again, I was happy with the way the Q60S handles anyway – The BMW 4-Series may just have the edge on feedback through the wheels and so it may be the better “driver’s” coupe, but the Q60S feels like the better all-round package to me if you’re after a more refined ride with sharper looks.