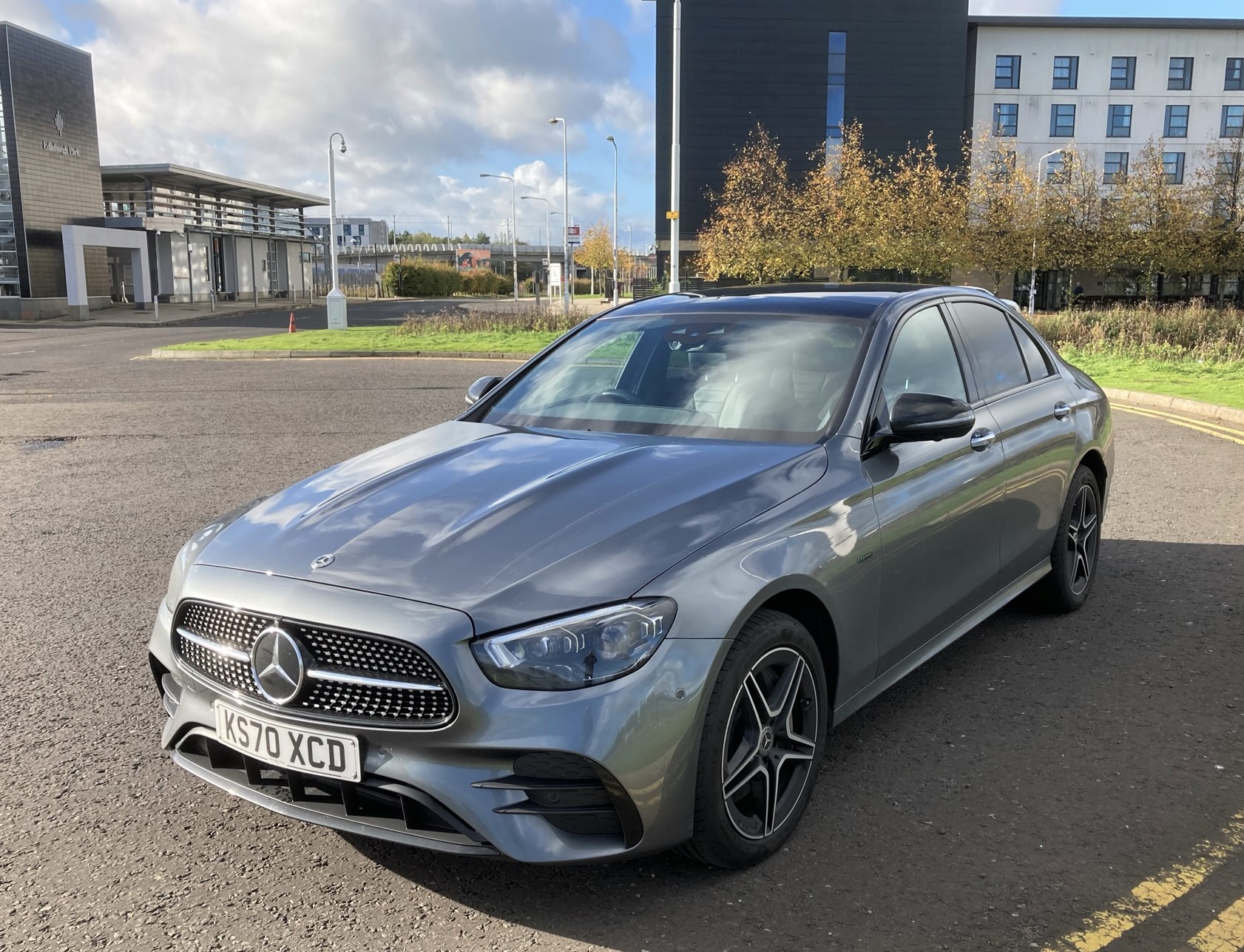 HAVING the right tools for the job is always reassuring, so when I realized my 700-mile round-trip, to visit family and friends back in England, coincided with the delivery of a Mercedes-Benz E-Class 300 de then I knew the journey would be a relaxed affair that wouldn’t put too much of a strain on the pocket either.

And that’s not only because the E-Class is a refined cruiser, but because the 300 de is also a diesel/electric plug-in hybrid (PHEV), capable of over 235 mpg. Okay, that’s a rather fanciful, spec-sheet statistic that you just won’t see in real-world use. However, I did see figures in the mid-60s on my journey of mainly motorways and A-Roads. Had I bothered to top up the 13.5 kWh battery en-route, it would have been even more.

Capable of around 32 miles in pure electric mode, the E 300 de would be perfect for the average commute and means there would be no need to use any fossil-fuel whatsoever – assuming you can charge at home and work, of course. A home wallbox (7.4 kW) will fully charge the E 300 de, from 10%, in just 90 minutes. Using a domestic socket takes around 5 hours.

While the E 300 de may not be the cheapest PHEV out there, it’s certainly one of the best when it comes to refinement and tech. Entry-level trim is the rather luxurious AMG Line Edition, while AMG Line, AMG Line Premium and AMG Line Night Edition Premium Plus are also available.

But enough of the hybrid-talk; what is the Mercedes E 300 de like to live with? Well, outside and inside it’s what you would expect from the premium, German manufacturer – classy, refined and very well screwed together.

Outside, the new E-Class Saloon hasn’t changed a great deal. The entry-level model now comes with the sporty Avantgarde Line exterior with central star and the fresher appearance is enhanced by the new front end with increased chrome content.

The AMG Line now comes with a new bumper in the style of the AMG Performance models, so it looks even sportier than before. there are also full LED headlights. In addition, Avantgarde and AMG Line now feature a bonnet with powerdomes. Cool.

Mercedes-Benz have also updated the saloon’s rear end with a new bumper, two-section tail lights with a new internal design and a new boot lid.

I was handed the keys to a E 300 de AMG Line model that had a few extras thrown in, like the Driving Assistance package which includes a range of intelligent features that help you stay safe on the road. The package includes the likes of Active Blind Spot Assist, Active Braking Assist, Active Lane Keeping Assist, Steering Assist and route-based speed adjustment for adaptation of speed before curves, roundabouts and junctions.

But it’s the interior itself where you’ll get the most “Oohs” and “Aahs” from the neighbours as the E-Class is quite sublime. Mine was finished in black leather with the Grey open-pore ash wood trim giving the dash, centre console and door-tops an opulent look and feel.

Of course, the most striking feature of the cockpit are the two 12.3in screens that give a true “Widescreen” effect across the dash and are new to the E-Class. The information in the instrument cluster and on the media display is easily legible on the large, high-resolution screens.

The very latest generation of the MBUX multimedia system (Mercedes-Benz User Experience) makes controlling everything super-easy whether you use voice control via “Hey Mercedes” or use touch inputs on the screen or steering wheel. I used the voice commands extensively and was impressed by its accuracy and flexibility – even with my strong Northern accent.

Everything inside the new E-Class feels worthy of the Mercedes-Benz badge. From the quality of the switchgear to the stitching in the oh-so-comfortable heated front seats and even the 64 choices of ambient lighting and the feel of the revised steering wheel – it feels a cut above the likes of BMW and Audi.

Rear passengers get a good deal too, with plenty of head and legroom. It’s only in the boot that things take a downward turn for the hybrid models. Due to the battery pack’s location you’ll not only find a reduced capacity back there (370 litres) but also a very large “step” that makes sliding larger objects into the boot a bit of a pain – if not impossible. However, the rear seats can be split 40:20:40 so the golf clubs and trolley should still have plenty of space.

On the road, the Mercedes E 300 de continues to impress from the moment you glide silently away from home and onto the open road (battery charge permitting!).

You would hardly know the E 300 de has a diesel engine under the bonnet – unless you’re heavy-footed on the accelerator. Wind-noise is at a minimum, as is road-noise from the 18in tyres. The 9-speed auto gearbox sits quietly in the background doing its thing and 400Nm of torque means you shouldn’t have any problems when it comes to overtaking.

Performance is very good for such a large, premium saloon, with the E 300 de hitting 60mph, from a standing start, in under 6 seconds, while the pliant ride smooths out all but the worst road-scars.

Being an E-Class, the car is made for cosseting its driver and passengers on longer journeys and I found the ease of use of the tech added to a positive experience. The MBUX system is very nearly flawless from changing temperature to setting a destination or setting the seat to massage your back, it’s as simple as just saying what you desire. It was only the augmented reality navigation that I thought was a bit unnecessary and sometimes distracting.

My only gripe on the long journey South was the amount of reflection on the windscreen from the dashtop in bright sunlight. Other than that, the journey was a pleasure and we both arrived feeling fresh and stress-free thanks to the brilliantly engineered – and clever – Merc.

If you fancy a diesel PHEV, then the Mercedes E 300 de is a no-brainer as other manufacturers prefer to stick with a petrol/electric hybrid. Indeed, Mercedes themselves have the E 300 e (from £46,230 OTR) which uses a petrol unit, but for maximum hybrid economy in a large, premium saloon (or estate) the E 300 de is peerless.