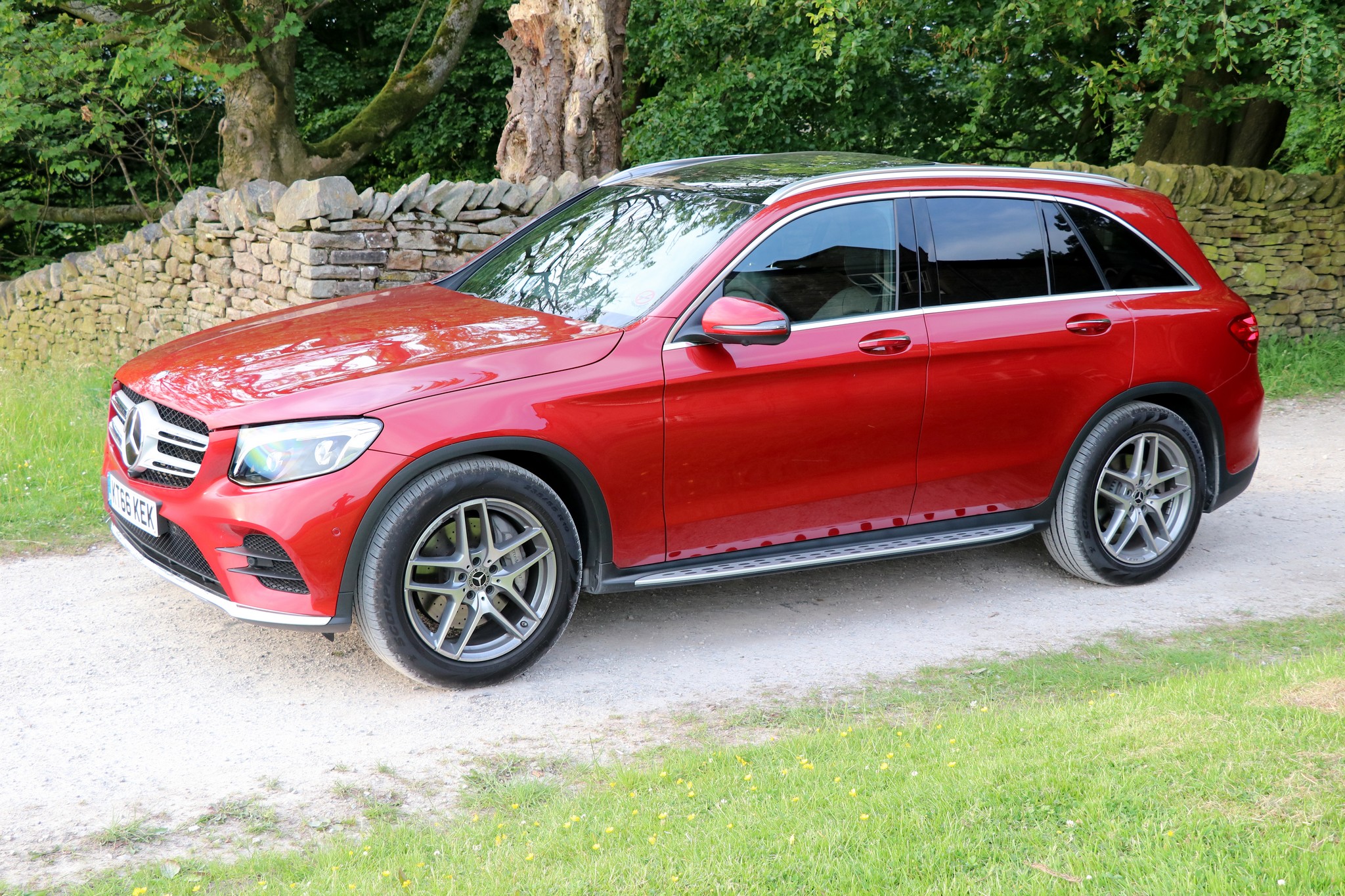 THE Mercedes-Benz GLC is a long-awaited replacement for the Mercedes GLK which appeared in 2008. The old GLK was strictly left-hand-drive only, proving that the mighty M-B didn’t have access to a crystal ball.

Had they been able to look into the future and seen the rise of the SUV, surely they would not have made the mistake of excluding all those potential customers who drive on the “correct” side of the road.

However, the problem is now addressed and Mercedes have produced a mid-sized SUV to take on the likes of the BMW X3, Audi Q5, Jaguar F-Pace and Land Rover Discovery Sport.

Based on the C-Class saloon platform but bearing no resemblance to it from the outside, the GLC is imposing with a muscular front end dominated by that large 3-pointed star in the middle of the front grille and scooped-out intakes in the lower front sections. The rear is softer and smoother but still looks the part with twin chromed exhaust outlets. There is also a coupe version available with a much more swooping roofline but to my eyes the SUV version looks better having the taller stance at the rear which appears to keep the whole thing in proportion when viewed from the side.

The GLC is tall but not overly so – getting in and out is no chore and once seated you could easily think you were in a crossover model rather than an out-and-out SUV which is no bad thing as your visibility is certainly improved without having to suffer vertigo.

The interior is lifted pretty much from the C-Class and is typical Mercedes – i.e. it blows every competitor’s interior away. The new Audi Q5’s interior is without-doubt a nice place to sit and the Land Rover Discovery Sport will put a smile on your face but the Mercedes GLC will give you a warm, fuzzy feeling as you survey the combination of (man-made) leather, dark wood and aluminium trim combined to create a wow-factor that others can only aspire to. The silver-stitched black leather looks and feels very good indeed – even on the dash-top where it sweeps from one side of the cabin to the other, only rising to cover the main instrument binnacle. The front of the dash is dominated by a large expanse of black ash that is beautifully grained and which houses the 3 circular central air-vents and their controls, cascading down to the controls and touch-pad for the infotainment system. Everything is edged in brushed aluminium and, of course, the buttons for seat adjustment are placed on the door-cards where they can be easily reached.

The infotainment screen is a bit of a disappointment – looking like an iPad fastened to the top of the dash – but at least it’s easily accessible and doesn’t interfere with forward visibility. It works very well too being sharp and responsive with an easy-to use large rotary controller and track pad in the centre console.

All switchgear is sensibly placed and you won’t find a cheap plastic finish anywhere. The chunky, multi-function steering wheel is flat-bottomed to give a sporty feel and the seats are just about the right side of “firm” to be comfortable. Myself and Mrs. B survived another trip to Scotland with no aches or strains on the 300-mile trip, thus confirming that the Mercedes-Benz GLC is a terrific mile-muncher which returns a not-too-shabby 48mpg. Rear passengers fare well too with plenty of headroom and knee room although that large transmission tunnel will mean any central passengers won’t have much foot space to get comfortable but is no worse than the competition. Rear passengers also get their own heater controls, which is a nice bonus, and plenty of cubby holes for drink bottles, crayons and tech, etc.

Boot space at 550 litres is about par for the course although the 7-seater Discovery Sport could arguably be seen as more practical for around the same money.

The 2.1 litre turbo-diesel engine in our GLC 250d AMG-Line model produces 204 bhp although you can have the same engine with 170 bhp in the cheaper 220d models. There is also the GLC 350d with a 258 bhp V6 diesel and the storming 367 bhp GLC 43 with a V6 petrol engine fitted. All models have a 9-speed auto gearbox and permanent 4-wheel-drive. Driving the Mercedes GLC 250d AMG-Line highlights just how well Mercedes-Benz put a car together. The GLC is a very quiet SUV with very little noise from the tyres or wind getting into the cabin – even at motorway speeds. The auto gearbox is a gem, never being caught out and the 2.1 engine pulls very strongly and can whisk the GLC to 60mph in just 7.6 seconds.

Being a Mercedes the GLC leans toward comfort rather than dynamic ability so if you’re after a sporting experience then you should check out the Porsche Macan or the Jaguar F-Pace which are both more satisfying to drive on twistier roads.

However, if comfort is your thing – with a real off-road ability when needed – then the Mercedes GLC won’t disappoint even with the stiffer suspension of the AMG-Line model and it’s 19in alloy wheels. Dynamic Select is used to alter driving dynamics from Eco, Comfort, Sport and Sport+, all of which will provide a pot-hole-cancelling ride which kind of negates the need for the optional air-dampers.

There are plenty of driver-aids and safety features fitted as standard; such as the excellent collision prevention system, powered tailgate, Agility Control for a well-balanced ride and Active Parking Assist with rear camera.

However, what will impress you most about the GLC is the feeling of quality both inside and out which may spoil you enough to dismiss other manufacturers out of hand. But that luxury feel doesn’t come cheap and you would be wise to at least have a peek at the opposition – even if it is just to feel smug about the Merc you’ve just bought . . .