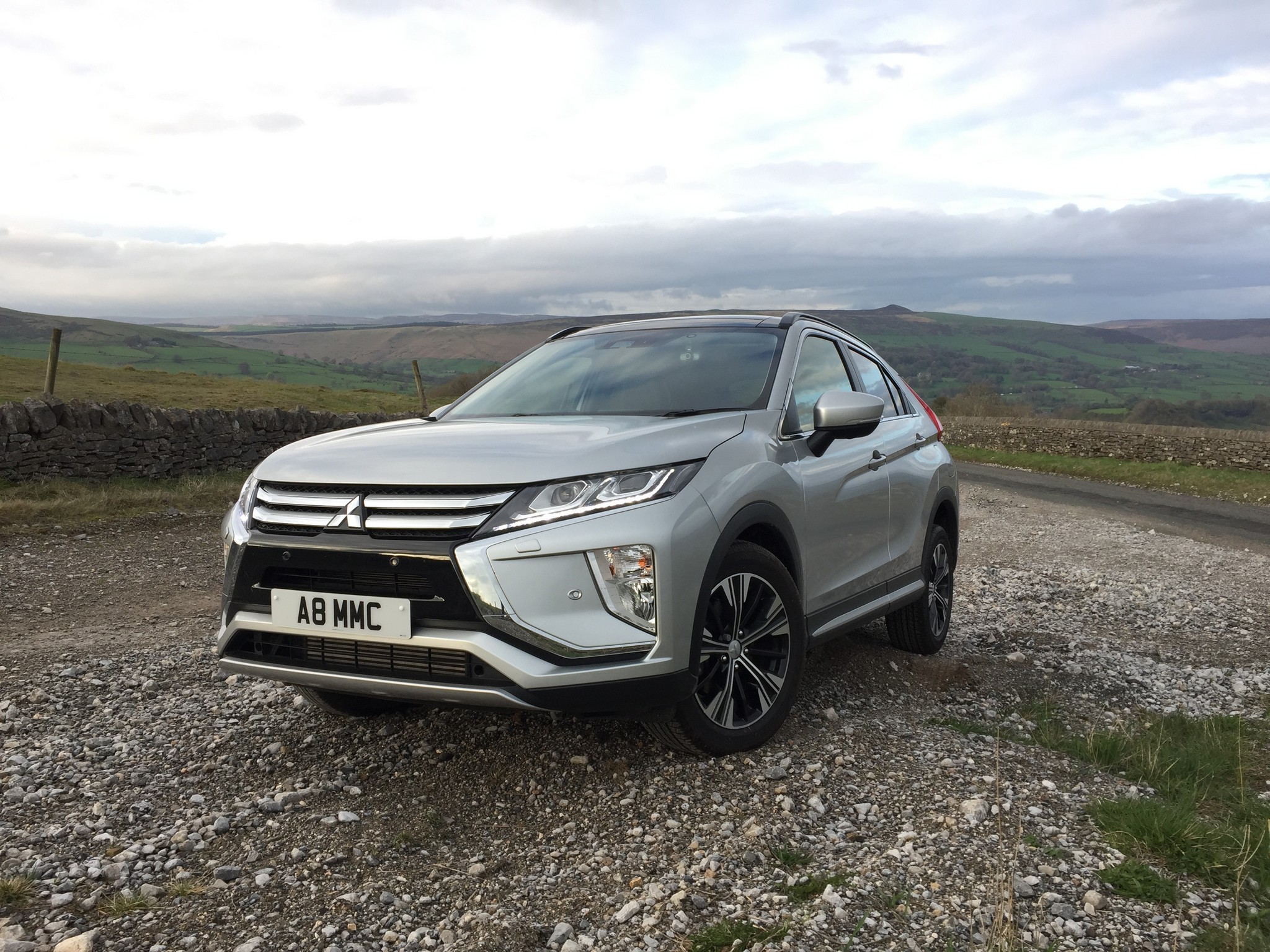 THE new Mitsubishi Eclipse Cross sits between the smaller ASX and the all-conquering Outlander in the Japanese company’s SUV line-up and makes a lot of sense if you’re looking for a spacious family Crossover that is good on equipment but won’t break the bank.

Available in 2WD or 4WD you have the choice of a 6-speed manual or a CVT automatic gearbox. What you can’t choose at the moment is the power-plant as the Eclipse Cross comes with just the one. Don’t worry though because the lightweight 1.5 petrol unit doesn’t disappoint. For those who are thinking of towing regularly then a diesel will available later in the year.

The Eclipse Cross is based on the Outlander platform so you’ll find it provides more interior space than most of its rivals, such as the Nissan Qashqai, SEAT Ateca and Toyota’s RAV4 and with sliding rear seats I found the space for rear passengers was particularly generous. Designed by former Nissan employee Tsunehiro Kunimoto, the Eclipse Cross is the first example of his work for Mitsubishi and it’s really rather striking.

The front, wide-open, angular grill flanked by two large lighting “pods” is typical modern Mitsubishi with plenty of chrome trim and there is no mistaking it from anything else.

However, the flanks are more unusual with deep sculpted coach lines that only start from halfway along the front doors. The cut-off rear is even more unusual with a split rear-screen and the roofline of the Eclipse Cross is quite steeply raked giving it an almost coupe-like feel and unlike anything its rivals – in a similar price-bracket – have to offer.

Overall the Eclipse Cross is different enough to garner a second look on the street and every comment I received about the Eclipse was positive. A good start then. Mitsubishi keep the momentum up with the interior which looks and feels more upmarket and modern than in the ASX. I’d say it was on a par with the Outlander for quality of materials which means, yes there are some parts that feel a little utilitarian but the surfaces you will come into contact with on a day-to-day basis are absolutely fine.

The switchgear feels sturdy enough and the main dials are bright and easy to read.

The 7in infotainment screen sits atop the dash and can be controlled be either touching the screen or using the track-pad between the front seats. Both are responsive and work well enough with Apple CarPlay and Android Auto adding plenty of appeal.

While the front impresses with supportive and comfortable seats, plenty of elbow room and a good driving position, it’s the rear which steals the show as it is just so unexpectedly spacious and versatile. The 60/40 rear bench slides forward to allow more boot space if needed (an extra 20cm of depth) but in their rearwards-most position the seats allow for impressive amounts of leg room that you won’t find in other mid-sized SUVs and head room is pretty good too, considering that sloping roofline.

The boot volume does suffer a little because of this, however, at 448 litres but with the rear bench down this increases to a respectable 653 litres. I liked the fact that the rear parcel cover can be rolled up and stored under the boot floor. There are 3 trim levels for the Eclipse Cross – handily named 2, 3 and 4 although for those wanting something a little more exclusive there is a First Edition model coming soon that features a special paint finish, carbon trim and exclusive red coach lines as well as some interior goodies. The 3 is available as a 2WD Manual or Auto or a 4WD Auto. It starts from £22,590 OTR and adds 18in. Black/silver alloys, Dual Zone Climate, Keyless Operation, a Forward Collision Mitigation System, Head Up Display and Auto Stop/Go.

Step up to the “4” (starting from £24,990 OTR) and you get black Leather Seats, Blind Spot Warning, Rear Cross Traffic Alert, 360-degree Parking Camera and an upgraded Rockford Fosgate speaker-system.

I’ve been driving a 2WD Manual “3” and found I had everything I could possibly need. The HUD seemed a little over the top but some may find it a boon. My car had the optional Orient Red paintwork at a cost of £540 but it did look rather special and I would say worth the extra layout.

On the road I was immediately pleasantly surprised by the 1.5 petrol unit which develops 163PS at 5,500 revs – more than enough for most situations and it certainly dealt with some steep climbs in the Peak District very easily indeed. The engine is a peach with torque available across the entire rev range – it’s quiet too being a 4-cylinder, 16-valve DOHC. There’s no 3-cylinder tappity-tap here like you may find in some rivals.

But it’s the way it pulls that impresses the most and it actually feels quicker than its official 10.3 seconds to 60mph. On the motorway overtakes can be taken confidently and although there is some wind noise from the wingmirrors I would say the Eclipse Cross is one of the quieter mid-sized SUVs I’ve driven.

The 6-speed manual gearbox was faultless although the steering feeling is a little numb and at motorway speeds appears to need the occasional input to keep things on the straight and narrow but it’s certainly no deal-breaker. The Eclipse Cross is a decent cruiser but it feels more at home around town and darting down the occasional A-Road where it can be genuinely fun to drive thanks to the responsive engine and snappy gear change. Body-roll is well controlled and I can imagine that you can have even more fun in the 4WD models where levels of grip will be even better.

If you’re on the lookout for a mid-sized SUV that offers more space than most and is stylish enough to stand out from this crowded segment of the market than you could do much worse than check out the Mitsubishi Eclipse Cross – it certainly puts its main rivals in the shade.