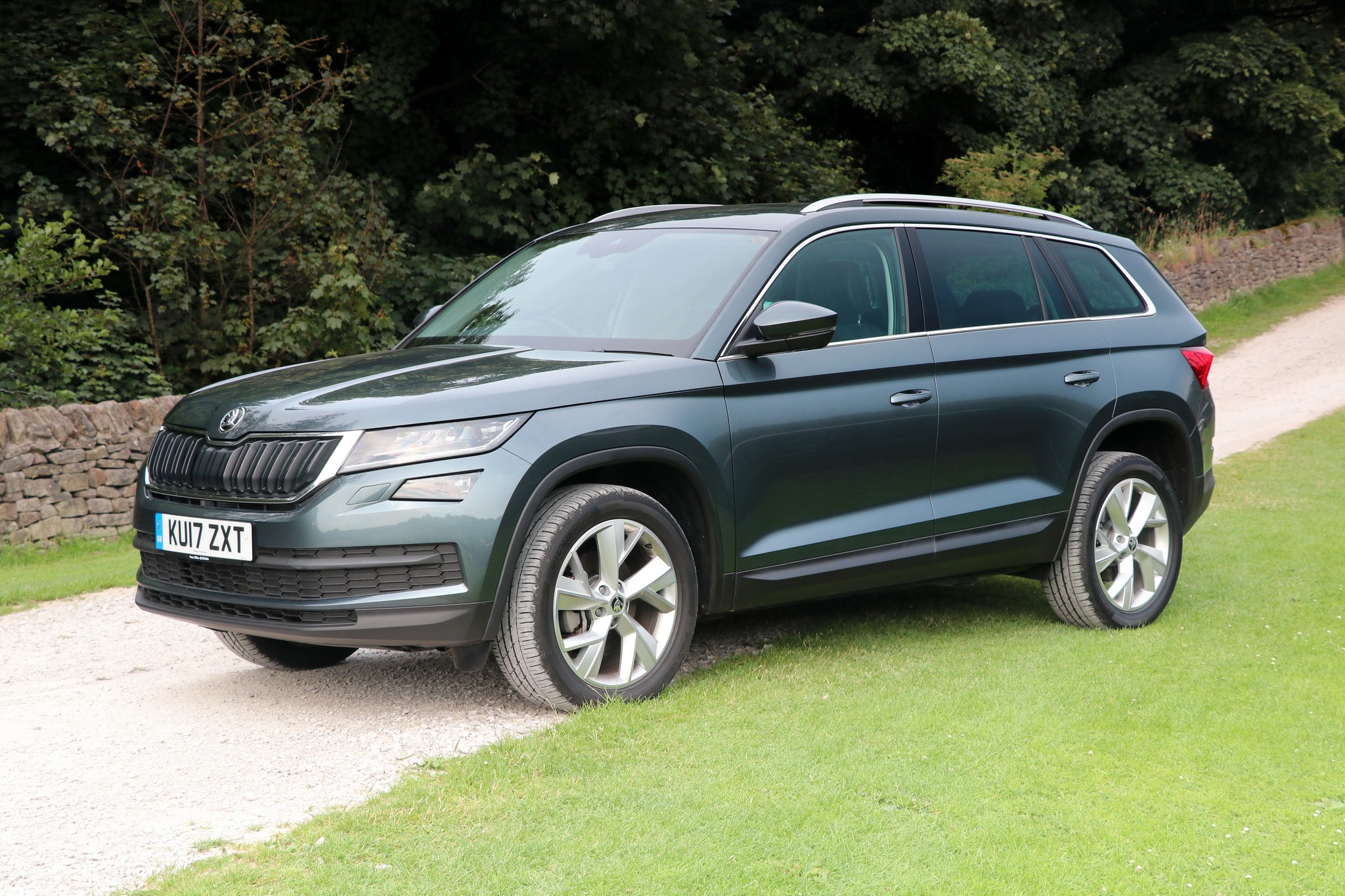 The new Kodiaq is Skoda’s first venture into the large SUV market and it’s making quite an impression among those who are looking for a family-friendly Crossover that has plenty of space but isn’t unwieldy around town – it’s actually only 4cm longer than the Skoda Octavia.

The fact that there is a 7-seat option greatly adds to the Kodiaq’s appeal, putting it up against the likes of the KIA Sorento  and the Hyundai Santa Fe while the top spec model can just about live with the much more expensive (if somewhat roomier) Land Rover Discovery.

Outwardly it looks the business with a tall stance but a swooping roofline which keeps the Kodiaq looking meaty without appearing top-heavy. The 19in alloys leave suitable space in the wheel arches to make the Kodiak appear a serious off-roader (it isn’t), while the small overhangs at front and rear hint at just how much space there will be inside. The front end is quite aggressively styled with a wide 3-dimensional grille between raked, four-element headlights, topped with a clam-shell bonnet while the rear has Skoda’s trademark C-shaped LED lights cutting sharply into the hatch.

As you would expect, the Skoda Kodiaq is also aggressively priced and the base S model can be had in 5-seater mode, with a 125PS 1.4 TSI engine for just £22,190 on-the-road which is a bit of a bargain when you consider that this is a well-built, spacious SUV capable of accommodating your average family very comfortably – the boot capacity is better-than-average at 720 litres and a whopping 2,065 litres if the rear seats are folded.

However, even though the S model is reasonably specced you’ll be wanting something with a few more toys and torques so you may go for the SE (from £23,640 OTR) or move straight onto the SE Technology with seven seats, a 2.0 litre TDI engine with 150PS and DSG gearbox which starts at £28,590 – or £28,775 if you want 4×4 with a manual gearbox. Still, all reasonable prices when compared to the main rivals and with better quality materials and finish than some. If burning oil is not your thing then the 1.4 petrol engine can also be had with 150PS and there is a 2-litre petrol unit giving 180PS if you like to trap on a bit.

I’ve been driving the range-topping Edition model with a 150PS TDI engine, 7-speed DSG transmission, 7-seats and 2WD – costing £33,490 OTR and I can’t really see why you would want the 190PS unit as never once did I feel a lack of power even with a full complement of 7 passengers.

Not needing to go off-road, I didn’t miss 4×4 capability either but I can see how it could be useful in the winter months, especially in rural areas. Inside the Kodiaq feels spacious, light and airy with one of the best driving positions I’ve ever encountered. Driver and front passenger have loads of elbow room and there are large door bins for water bottles, ipads and umbrellas – actually, don’t worry about the umbrellas as one is provided in each front door, tucked away neatly, out of sight.

The glove box has two large openings and there is ample storage in the centre console. Pay a little extra and you can add storage beneath both front seats too or even have some of the storage air-conditioned to keep your drinks cool.

Headroom, as in the rear, is good too with those over 6ft. having plenty of room – although be aware that the panoramic sunroof will lose you an inch or so. Those extra 2 seats in the back are only really suitable for children as you need to be quite sprightly to get into them in the first place and once there is not much leg room. Shorter journeys only then. It’s also worth noting that these seats do not have ISO fixing points for child seats either.

Fit and finish is very good in the Kodiaq with little sign of money saving materials – maybe the lower plastics are a little on the cheap side but everything you can easily see and touch feels premium – not Audi premium but very good all the same. The dark wood finished panels were particularly pleasing on the central dash and door caps and complemented the leather seats very well indeed.

The dash layout is typical VAG in that it is ergonomically excellent with everything being logically placed and to hand with the new Colombus 8in infotainment screen being particularly easy to use and providing multi-route Sat Nav as well as DAB radio and Apple CarPlay or Android Auto to mirror your smartphone. You’ll find plenty to keep yourself and others safe too in the Skoda Kodiaq with features such as Front Assist with City Emergency Brake being standard on all models. Also available are Adaptive Cruise Control (ACC), Lane Assist, Blind Spot Detect and Rear Traffic Alert.

As well as the umbrellas, an ice-scraper in the filler door and a detachable boot light, there are other “Simply Clever” ideas that will make you wonder why these items haven’t been available for years. My favourite on the Kodiaq is “Door Edge Protection”. On opening any of the 4 doors a plastic strip ejects to cover the door edge and is automatically retracted when you close the door. Simple but brilliant and should save on the touch-up paint.

Take the Kodiaq for a drive and you’ll find the large SUV “shrinks” around you as you make your way through town. The Kodiaq is so easy to drive and with such good a good driving position you’ll be as relaxed as you would driving a mid-sized hatchback. The 7-speed DSG gearbox helps here of course, although the manual is a slick shifter that won’t cause you any problems and the Kodiaq’s steering is well weighted enough to make those more awkward manoeuvres effortless.

As you would expect, scars in the road are dealt with very well, even on my models 19in wheels. Dynamic Chassis Control is an option that should improve things even more but I didn’t feel it was necessary as the car felt smooth enough with little body-roll around sharper bends.

In fact the Skoda was just as much fun to drive as the Volkswagen Tiguan I drove recently, and to be honest it felt just as well put together although I don’t think the sound-insulation is quite up to the VW’s standard as on the motorway tyre and wind noise was more noticeable – although nowhere near a problem.

Skoda thoroughly deserves its What Car? 2017 award in the “Best large SUV” category and a large part of that will be down to pricing and quality of finish. Throw in the VAG group’s engines and drivetrain and you have a top-quality family-sized SUV that is very hard to argue against. Simply Clever, indeed.