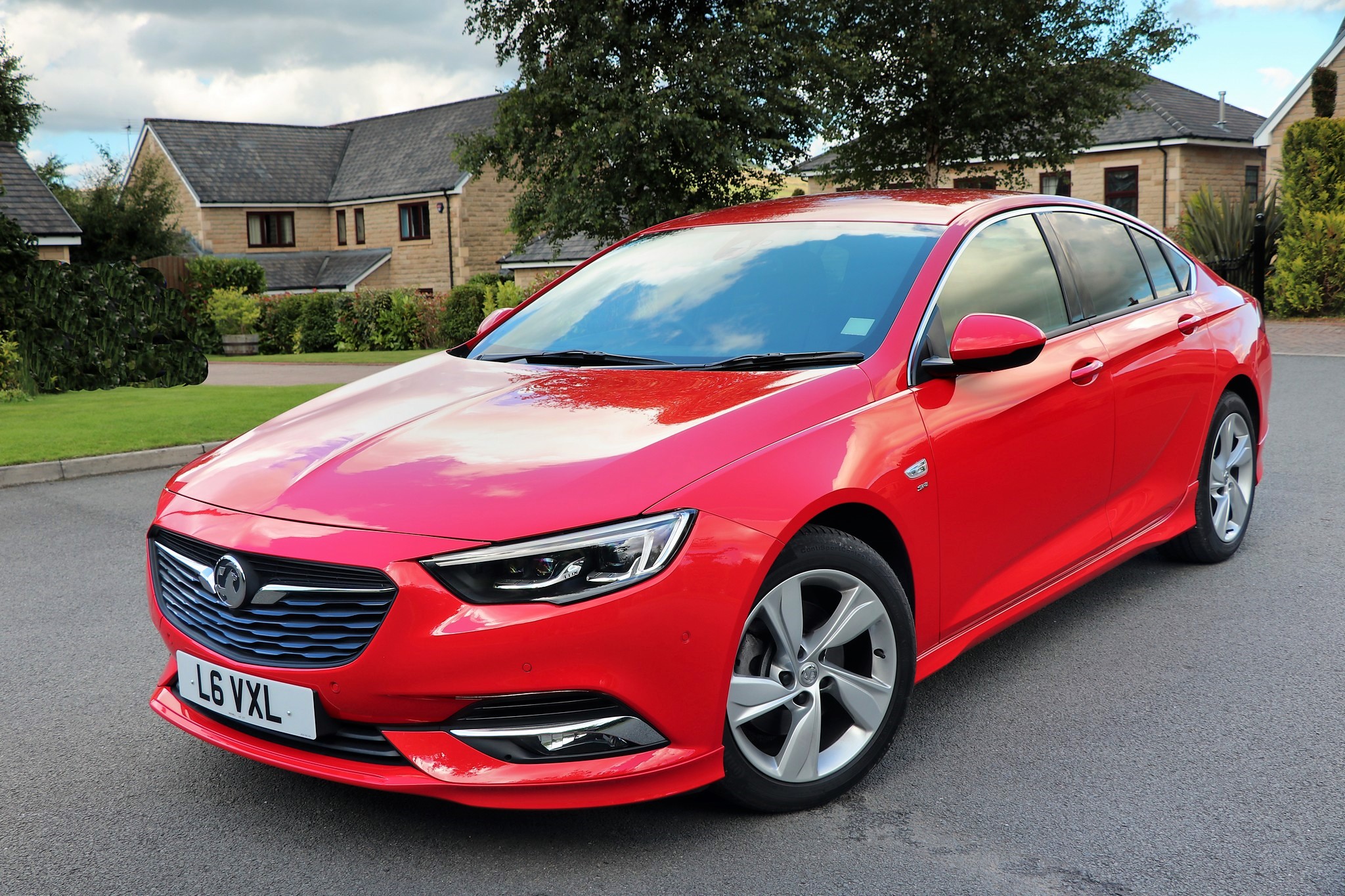 THE new Vauxhall Insignia has now been given the added title of “Grand Sport” in its hatchback guise but I’m not sure why Vauxhall feel the need to add the extra title as plain “Insignia” was, and still is, fine by me.

It’s not as though the new Insignia is much grander and much sportier than the previous model – it certainly looks sleeker and is more spacious than what has gone before but not so much as to require a new title. Maybe Vauxhall thought it would help in making the new Insignia appeal to those who may be considering an Audi A4 or BMW 3-Series as their next purchase.

No matter because the new Insignia is a much better car than the previous version, being lighter as well as cleaner, with added space and technology that betters anything in this price bracket, including its arch nemesis the Ford Mondeo. British designer Mark Adams has certainly managed to give the Insignia more kerb-appeal, although in my test car’s Lava Red colour scheme it has been somewhat dulled – a more “grown-up” Satin Steel Grey or Sovereign Silver would have been my choice.

A lower and sharper front grille hints at the Insignia’s better aerodynamics and you’ll find your eye following some smart rake lines along the sides that look particularly appealing when swooping back from the door handles. The roof line is low at the rear giving a sportier look but making rear access a little more difficult for taller passengers, while the rear itself has a subtle spoiler atop the hatch and a chromed, oval exhaust.

Based on an all-new platform that allows for more interior space by pushing the wheels further out to the extremities, the Insignia Grand Sport feels airy inside and rear leg-room, in particular, is very good. Indeed, you’ll find that it’s almost on a par with the likes of the Mercedes-Benz E-Class.

Up front is where you’ll notice the biggest improvement with a cockpit that not only looks bang up to date with minimal buttons and a large infotainment screen but feels good to the touch too with quality, soft materials used along the dash and door card tops. Standard kit is impressive too with 18in alloys, auto lights, keyless entry and start, air-con, cruise control with speed limiter, multi-function, flat-bottom, leather steering wheel, Navi 900 intelliLink system with European maps, 8in touchscreen, Bluetooth phone and audio streaming, Apple CarPlay and Android Auto, 7 speakers and the award-winning Vauxhall OnStar service which will call for help in an emergency, provide a WiFi hotspot, allow some remote functions via your smpartphone or even help set your set nav for you – amongst other handy functions. The 8in screen is clear and responsive and more importantly, a doddle to use in almost all modes – I couldn’t understand why hitting the “Pause” button on the media function only muted the sound though. Annoyingly it didn’t pause the track at all.

Driving position is very good with the hip-level being around 30mm lower than in the previous model giving the impression that the new dash is now more driver-focused. A plethora of adjustments for both seat and steering wheel means no one should have a problem getting comfortable, although lack of lumbar support for the front passengers seems a little mean.

The main instruments are clear and concise, consisting of 3 large circles with the speedometer being central, and in my car, having the £415 optional 8in colour display which is configurable to show such things as economy, park assist information or even sat nav prompts. The Head-Up Display – another £290 option – worked very well but, for me, is an indulgence too far. Better to put that money toward the excellent Flexride system (£800 option) that provides “Tour” and “Sport” options which are selectable from buttons in the centre console.

Rear passengers are catered for very well, and once they’ve stooped beneath that low roofline they’ll find they have plenty of head and knee room – around a 25mm improvement on the old Insignia and more space than in a 3-Series BMW or Audi A4.

Boot space remains unchanged at a generous 450 litres with the rear seats in their upright position and although there is a substantial lip to overcome when placing items in there, the overall shape is very good and shouldn’t cause any problems. Out on the road you’ll find that the FlexiRide’s “Tour” option softens the ride somewhat and is ideal for those long motorway jaunts while “Sport” stiffens things up a little for the shorter A-road blasts. Don’t expect BMW 3-Series levels of fun though, the Insignia never reaches true levels of sporting finesse, but it isn’t unwieldy either with only mild under-steer if you push a little too hard.

Steering feel was surprisingly good with more weight than I was expecting which gave more confidence when trapping on a little and overall I thought the Insignia felt more sporty than a Mondeo which tends to disconnect the driver a little more.

The 170PS diesel engine pulls very well in any gear although can be a little clattery low down in the rev-range and doesn’t really live up to its “whisper quite” name. Overall though I found it very easy to live with and mated with the slick 6-speed manual gearbox I had no reason to bemoan that fact I wasn’t driving the automatic. Wind noise at any speed was virtually non-existent – although how much of this was down to the optional Noise-Reducing laminated side windows (£220) fitted to my car, I’m not sure.

The new Insignia Grand Sport is as much a game-changer as the new Astra is – both are now real contenders rather than also-rans and deserving of serious consideration. The Insignia is certainly generous when it comes to interior space and it is perhaps only the Skoda Superb that will give it a run for its money in this price bracket. Spec for spec though, the Vauxhall still wins out.

There is quite a choice too when it comes to the Insignia. As well as the Grand Sport hatchback there is the Sports Tourer estate and the Country Tourer estate as well as 4×4 options. Models in between include the Sri and Tech Line with Nav versions being available also for a premium.

Engine choice includes a 1.6 diesel, capable of over 70mpg which is expected to be the best-seller and emits just 105 g/km of CO2.

The bottom line is that there will be an Insignia to suit your pocket and you’ll find that you are getting a generously-proportioned family hatchback that is not just well-equipped but drives very well too. The fact that it stands out against the current crop of SUV-wannabes ain’t a bad thing either as you would need to pay considerably more to get this amount of space and refinement in any of the currently-available cross-over clones. Definitely a welcome leap in the right direction for Vauxhall.