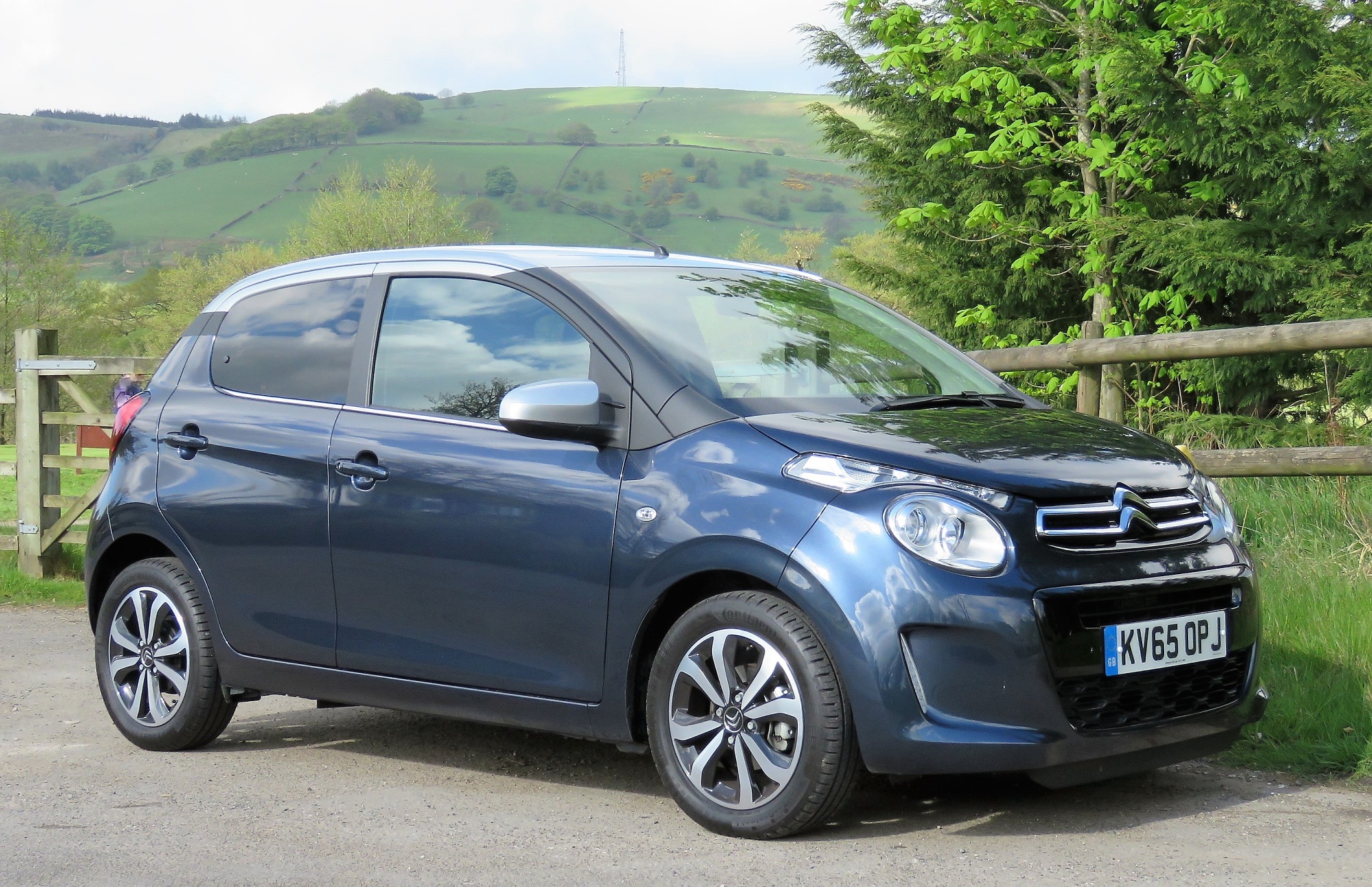 THE second generation Citroen C1 model improves on the first generation in both looks and equipment, and just like the previous version, shares it’s platform with the Peugeot 108 and the Toyota Aygo. Once again the little Citroen is the cheapest of the 3 with the base model “Touch” being available from just £8,245.

However, if you want air con you’ll need to step up the “Feel” model (£9,495) which also comes with a DAB radio with MP3 player and and a 7in. Touch Drive Mirror Screen which can (if you download the app) mirror your smartphone’s screen on the infotainment screen (Apple and Android only). Outside, the C1 remains rather cutesy looking with it’s upside-down headlight approach, not dissimilar to it’s bigger brother the C4. The rear has square 3D effect lights but is very similar to the previous model in that the glass hatchback makes up most of the entire rear. The black/chrome alloys set the car off nicely and in this trim, with the optional metallic paint, the C1 looks rather special. Inside the little Citroen is a world away from my wife’s 5-year-old C1 VTR. A large circular instrument cluster still dominates the dash but now it looks much more grown-up than the Noddy-esque Mk.1.

The infotainment system is a doddle to use and the 4-speaker system sounds pretty good for a small car. Height adjustable driver’s seat and steering wheel make for a comfortable set up even though there is no reach adjustment on the wheel. It does feel a little tight up front but not uncomfortably so, which is more than can be said for the rear where any adults taller than 5ft. 8in may find longer journeys rather tedious as head room is at a minimum and knee room is somewhat lacking. At least getting in and out should be easy in the 5-door version.

Mrs. B was delighted to see that the rear parcel shelf is now automatically tucked well out of the way when the hatch is opened – it always caused an obstruction on the old model when putting anything into the tiny boot and was eventually unhooked and assigned to the garage . . . Having driven the Mk1 C1 on a daily basis for the past 4 years it made sense for Mrs. B to drive the car for comparison and the verdict is that she loved it. This is in no small part to the 1.2 Pure Tech engine which pushes out 82 bhp compared with the old 63 bhp unit making the whole driving experience less frentic – especially on the uphills – with no need to wrestle with the gearstick so much to maintain a reasonable speed. Mrs. B also reported the new C1 felt much tighter with noticeably less body roll around corners. I found it to be good fun to drive and very chuckable around the twisties with decent feel from the steering. It’s no Mini Cooper but can still bring a smile to your face. The old 3-cyclinder engine is a good unit but the new 1.2 Pure Tech 3-pot is so much better that you could easily take the car for an extended trip on the motorway and have no worries at all about keeping up with traffic or even overtaking – noise levels at 70mph are also greatly reduced and you could quite happily cruise all day in the new C1 – although cruise control is not available, only a speed limiter.

The new C1 is also available with the latest incarnation of the 69bhp VTi engine but we both think you would be crazy to ignore the Pure Tech as it makes the little C1 so much more versatile in that a great little town car is now also a decent little cruiser – unless you are an adult sat in the back . . .