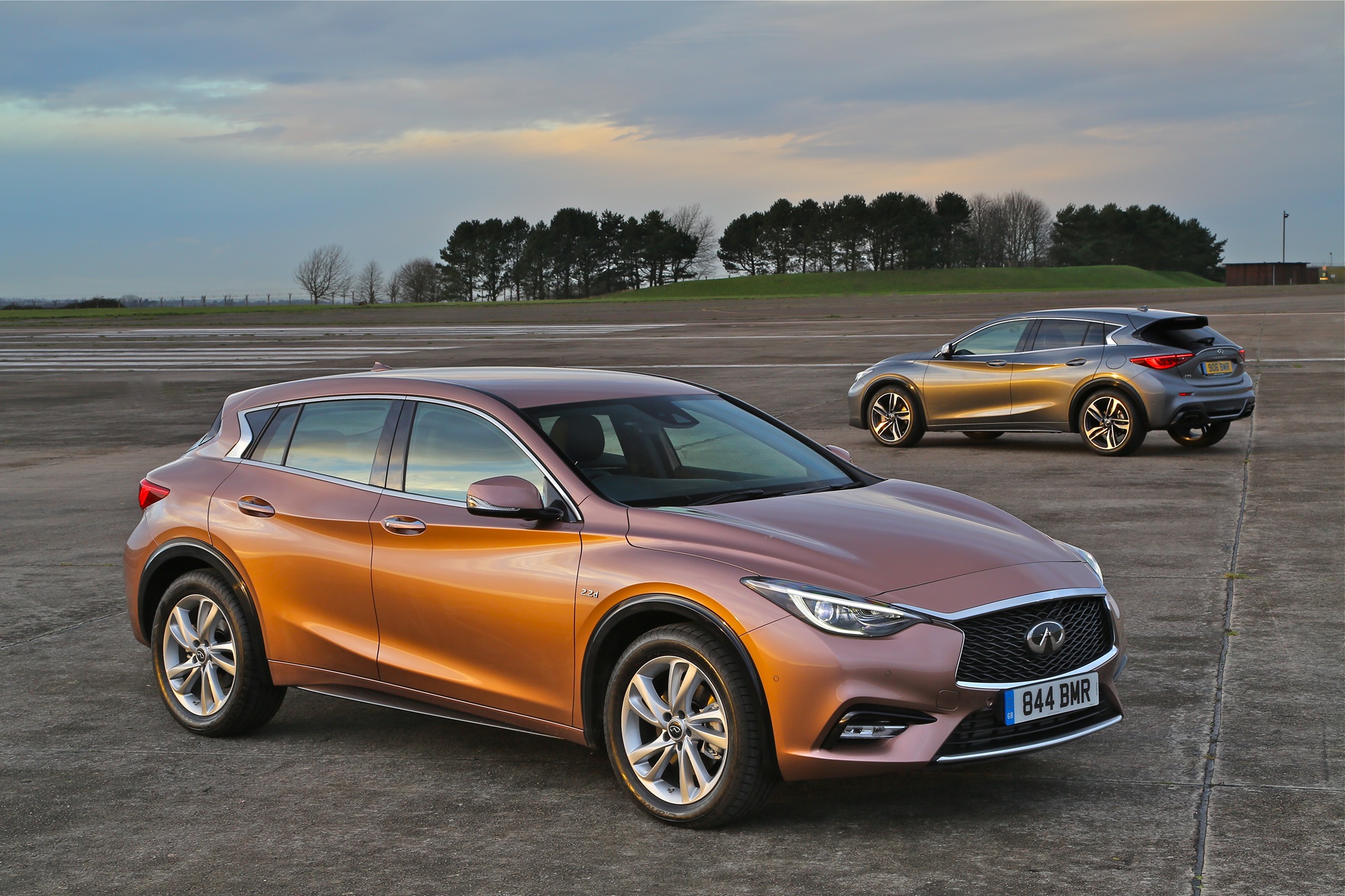 THERE’S a couple of things you should know about the new Q30. First off, it’s Inifniti’s  first foray into the compact car market – up to now being known only for their upmarket sport saloon (Q50), luxury saloon (Q70), the mid-size quality Crossover (Q50) and the premium large SUV (Q70). Secondly, if those names conjure up a total blank in your mind, then the Q30 may be about to change all that.

It’s a stereotypical damp, drizzly day in Stockport and I’m at the Infiniti Centre on Bailey Road to meet Terry Steeden, Infiniti’s UK Communications Manager, and to take a look at Infiniti’s new addition to the family – the Q30 premium compact car. After a quick introduction to the Infiniti range by Terry we are quickly onto the subject of the Q30 styling and I have to say it is very striking. Infiniti have an ethos of non-conformity when it comes to design but this can be a double edged sword as consumers have a habit of applauding those manufacturers wishing to try something new but then tend to plum for convention when it comes to handing over the cash. However, with enough substance to back up the unconventionality of their new car, Infiniti are hoping that the paying public will push through their doubts and take the Q30 into their hearts. So, a good place to start is by making the car look good and the Q30 is certainly that. Sitting slightly higher than a conventional car, it looks almost like a crossover model. But not quite. Somehow, the lines of the car, especially the shallow side windows and that distinct, razor-sharp body crease slashing back from the bonnet, through the door handles and onto the S-shaped rear pillar give the car an almost sports-coupe look. Most definitely unconventional, but pleasingly so.

The rear view is quite chunky, twin chrome exhausts supporting a hatchback that looks almost folded into the rear light clusters. There’s a few swoops going on here also. as there is at the front of the car where the Q30 is more conformist in toeing the family line with a wide black grill giving the impression of a large eye and a purposeful scowl to the headlights. The Q30 is available in two distinct flavours; the Premium and the Sport. The Q30 Sport is slightly different, thanks to a shapely bespoke bumper and gloss black front grille. Custom body-coloured side sills and a sporty rear bumper is joined by dark chrome dual rectangular exhaust finishers. 19-inch alloy wheels and a stance 15mm lower than the Premium model complete the look of the Sport.

Inside, the Q30 certainly feels premium. Leather and brushed aluminium with a gorgeous swooping dashboard which, in my demo car, was finished in an ivory white leather with red stitching, as were the seats and door cards. It really made the car feel special and airy. The quality of finish is up there with one its main rivals, the Audi A3, and to my eyes more appealing. The seats are purpose-built to support the upper and lower parts of the back, showing that Infiniti really want this car to be a top-class long-distance cruiser, not just a comfortable every-day vehicle. The first thing I noticed was that you certainly don’t feel like you are sat in a crossover model. The driving position and view is much sportier, more hunkered down than other models. This may not appeal to all tastes as a lot of people like the raised elevation when choosing a crossover. Personally, I prefer the sportier feel but where the Q30 really impressed was with ride quality thanks to that higher stance; it rode the potholes and road-imperfections very well. Nothing unsettled the steering and each imperfection was passed with barely a sound where a more sportier hatchback would give you a distinct, low “thunk”.

The 1.5 engine, while not sporting (the 0-60mph sprint takes 12 seconds) was perfectly adequate and refined, the steering was very good, one the more responsive and immediate I’ve driven for a while. The Q30 shares many of its underpinnings with the latest Mercedes A Class and the MB touches can be seen here and there which is no bad thing; the handbrake set-up for example is neat and intuitive once you get used to it. The 6-speed manual gearbox gave no cause for complaint and overall I would be more than happy to cover long distances in this car. Everything felt well screwed together, quality of plastics was up there with Audi and BMW and I liked the fact that the powered seat adjustments buttons were in plain sight on the door rather than hidden away down the side of the seat.

The infotainment system can be controlled either by tapping the 7in touchscreen or by means of a rotary knob between the front seats. I found it simple to use and navigating between modes was trouble free. DAB radio, Bluetooth and voice control are standard across the range. The Sat Nav (an eye-watering £1,400 option) got me to Lyme Park with no bother where I stopped to take a look at interior space. While the front seats are well sculpted and very comfortable I felt that the rears were a little plain and probably not as accommodating on longer journeys. Rear leg space was also surprisingly sparse. Not cramped, but 6-footers and above may have a few problems unless the front seat occupants slide their seats forward somewhat. Headroom is adequate though.

The hatch opening is a little unconventional in shape which may make getting some larger items in there problematic, but once in, there is plenty of space at 430 litres which is better than both the Audi A3 Sportback and BMW 1 series. Overall, I enjoyed my time the Infiniti Q30. I like it when a manufacturer pushes the boundaries of what we, the consumer, can expect from them. The Q30 deserves a wider audience than it’s bigger brothers have managed so far in Britain. Speaking of which, Britain is where the Q30 is built; Sunderland to be more precise – the first Infiniti to be truly British built.

So, if you’re hankering after something built here in Britain that is a little different, that will turn heads and rides very well indeed on both short and long journeys, that surrounds you by quality materials and gives you a truly premium experience, then you need to try out the Q30. I think you’ll be mightly impressed.