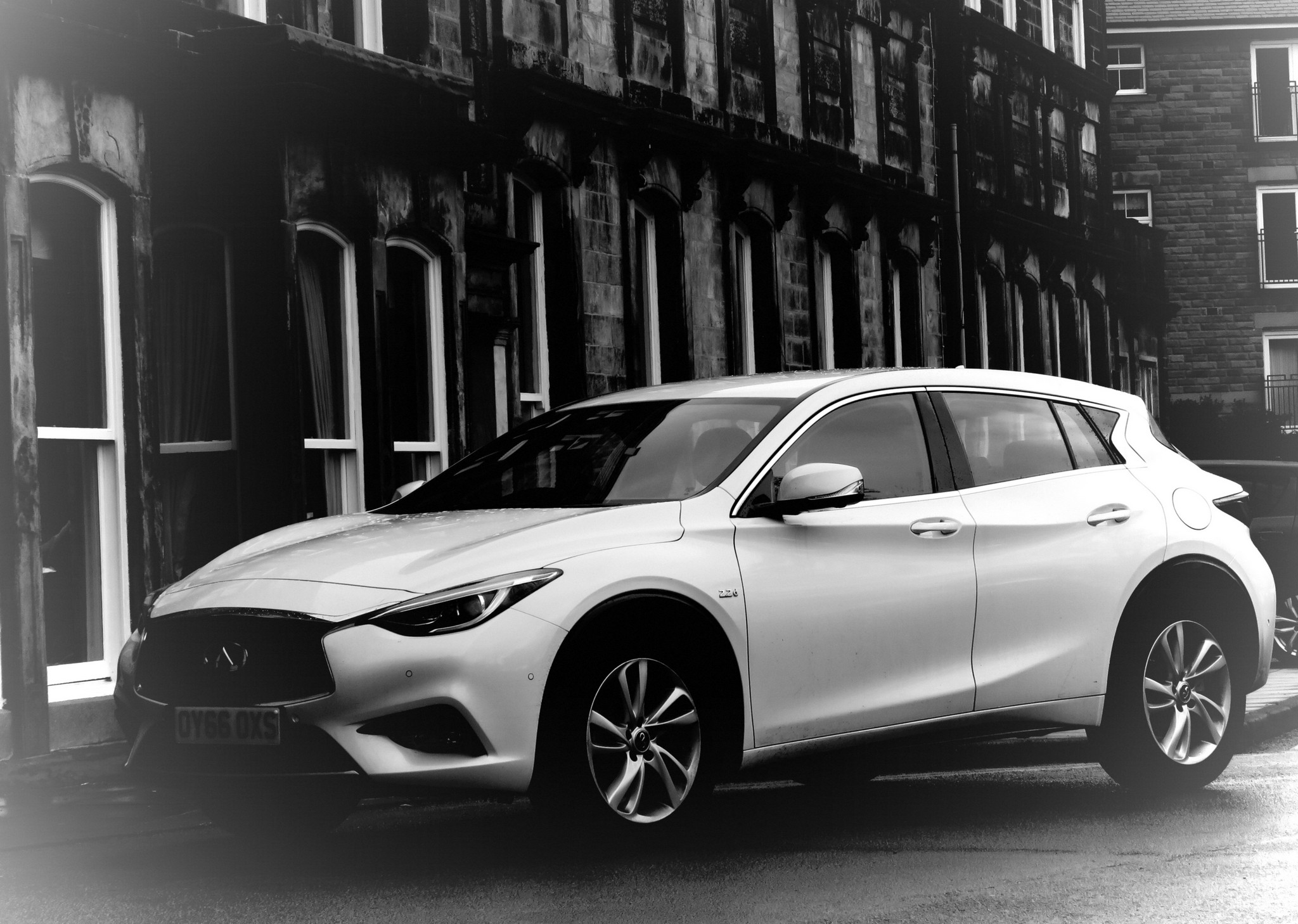 Have your cake and eat it – the rather special Infiniti Q30

A WEEKEND break in Harrogate for myself and Mrs. B meant that not only could we visit Betty’s Tea Rooms for the first time but we could give the Infiniti Q30 a good try out over some mixed roads including the Woodhead Pass and the M1.

Infiniti, being the premium brand of Nissan (much like Lexus is the premium brand of Toyota) has its work cut out to break into the C-Segement of the market where the likes of Audi with their A3, Mercedes with the A-Class and BMW with the 1-Series reign supreme when it comes to compact, premium hatchbacks – so perhaps it’s no bad thing that the Q30 is based on the Mercedes A-Class platform.

However, the A-Class hasn’t received too many plaudits since its release – especially when it comes to driving dynamics which are often described as “jittery” or “unsettled”. The good news is that the engineers at Infiniti have toiled no end to improve the ride and so the Q30 is a comfortable cruiser that bears little resemblance to its German cousin on the road.

Outwardly you would never mistake it for an A-Class either. For a start it sits up higher, almost SUV-like but not quite. And just look at those bold swage lines swooping rearwards and drawing your eye to the S-shaped C-pillar – there is nothing quite like it out there today and because the Q30 is, of yet, a rare sight on our roads you will find people stop and stare no matter which angle they are viewing it from.

Available in seven different trim levels, the Q30 kicks off at a reasonable £20,550 for the SE front-wheel drive model which includes 18in alloy wheels. We then go up through the Premium, Premium InTouch, Premium Tech, Premium Tech In Touch and finally the 2 sports models (Sport and Sport InTouch) which have sportier-looking bumpers front and rear, a rear diffuser, 19in alloy wheels and part-Alcantara sports seats up front with integrated headrests. The Sports models also have larger brakes, are slightly lowered and stand on stiffer springs.

Mrs. B and I were travelling in a Q30 Premium Tech model fitted with the most powerful engine available – the 2.2 diesel – which pushes out 170PS and can hit 60mph in 8.5 seconds. Also fitted was the 7-speed, dual-clutch automatic transmission driving the front wheels only. List price for this 2WD model with no options fitted is £31,180 – if you want 4WD then add another £1,550. Inside definitely has a premium feel to it with soft black leather everywhere, including the door caps and the top of the dash. The white stitching is a nice touch that breaks up the black and looks especially good on the heated front seats which we both found to be comfortable on the trip and have plenty of powered adjustment available.

The dark wood inserts in the door panels and centre cluster is a little old-school but suited the interior very well and wasn’t overdone with the centre console surround being in piano black. Brushed aluminium finishes on the stubby gear-lever, multi-function steering wheel and air-vents lift the ambiance and overall we both thought the Q30 was a very nice place to sit even on longer journeys.

The 7in touch screen infotainment system works well and if you don’t fancy fingerprints on the screen you can always use the rotary control knob between the front seats – it works very well and is much easier than poking a finger at the screen while on the move. The Mercedes legacy is evident again in the location of the electronic handbrake which is placed, awkwardly, on the lower right-hand side of the dash, below the steering wheel. The controls for the powered seats are also pure Mercedes but this time sensibly placed on the door tops so there’s no fumbling down the side of the seat for switches or levers.

Visibility all round is good – the narrow rear windows isn’t a problem – with the slightly elevated driving position especially helping with forward vision.

Rear passengers aren’t so well off I’m afraid. Leg room is a little disappointing and is noticeably better in the BMW 1-series and Audi A3. The sloping roofline of the Q30 also means you will need to watch your head when entering and exiting and the pronounced transmission tunnel will make it more awkward for any centre passenger to get comfortable.

Boot capacity at 430 litres is better than both the BMW 1-Series and Audi A3, however the boot opening is a slightly awkward shape for loading large objects due to the Q30s curves but I didn’t really have any problems getting a mid-sized suitcase in there and anyway, the rear seats have a 60:40 split for when you really need more space. Push the Start button and the 2.2 diesel fires up with a slight shudder. It’s interesting to note that higher-spec Q30s comes equipped with noise-cancelling technology that uses the car’s speakers to mask much of the external engine, road and wind noise that may otherwise mar the journey – and it appears to work very well. We found the Q30 a relaxing, cosseting drive with no noise problems at all.

It is also a very smooth ride – in fact one of the smoothest I’ve experienced in this class. Infiniti have purpose-built the seats to support the upper and lower back so the Q30 rides the lumps and bumps very well indeed with that extra ride height also making for quite a difference.

Handling and steering are also very good – although not on a par with the BMW when it comes to having fun on the twisties. However, the dual-clutch auto transmission isn’t easily caught out and on fast A-roads, like the Woodhead Pass, the Q30 feels very competent and quite relaxing to drive. You can certainly cover a lot of ground quickly and without fuss – the sure sign of a great cruising car. That raised ride-height didn’t appear to induce undue body roll either. In fact, the Q30 felt planted around the corners – I would expect the AWD version to feel even more so. Built in Sunderland, the Infiniti Q30 is definitely a well-put together package. It stands out from the crowd for (mostly) all the right reasons including style, comfort, exclusivity and build-quality. Where it falls down a little is on running costs – none of the engines achieve a C02 level of less than 108g/km (the competent, but rather sluggish 1.5 diesel).

I achieved 44mpg on our trip to Harrogate which, while not terrible isn’t as good as rivals can achieve and the Q30 isn’t the cheapest model either. But, just like Betty’s cakes, you may be willing to let your heart rule your head and pay a little bit more for the stand-out item rather than the stand-ard.