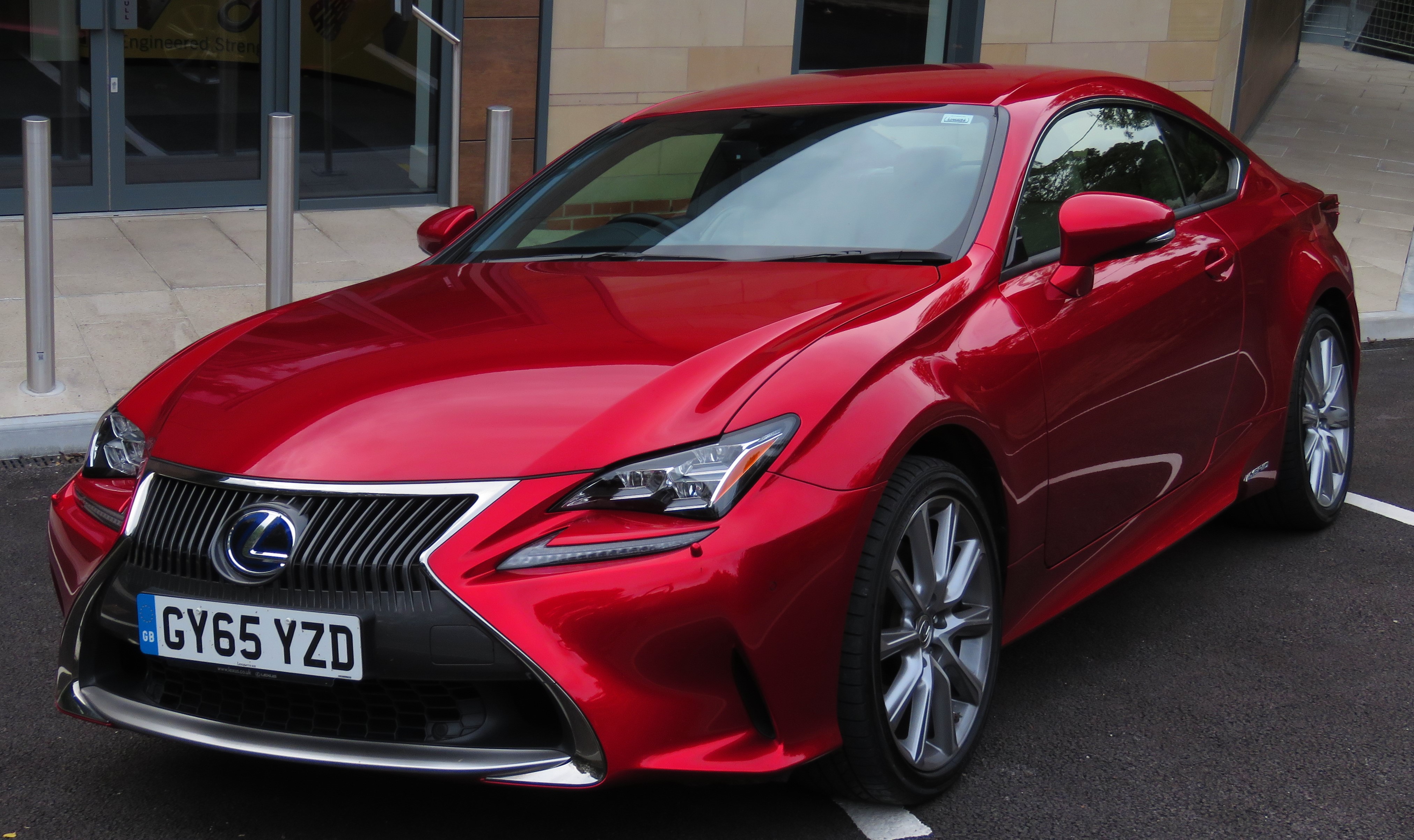 THE Lexus RC 300h drew a lot of attention from a lot of people in the week I had it – and when you see it in the flesh it’s easy to see why. It looks gorgeous and in this particular colour of Sonic Red it looks spectacularly good.

The Origami-inspired styling cues seem to suit the lines of the RC 300h much more than the Lexus RX450h which can look a little too aggressive. On the RC 300h they just make it look like it’s travelling at 120mph even when it’s stood still. It even has plastic “speed-streaks” in the rear bumper which add to the illusion. The RC 300h is definitely more striking than its main rivals – the BMW 4-series and the Mercedes C220 Coupe – but it’s 2.5 litre petrol engine and electric motor combination, which produce a total of 220bhp, is no match for the German rivals diesel units in both pace and economy.

The Lexus RC 300h isn’t poor on economy – it has an official mpg figure of 56 which ain’t bad for a large luxury coupe that weighs nearly 1700kgs – but it’s not great either.

I managed 48mpg on a trip up to Scotland and back which I thought was acceptable – especially as the Lexus was such a great, comfortable cruiser – however, calling it a Sports Coupe is a bit of a push. It’s more a Cruising Coupe as it again loses out to the Germans on outright performance. A 0-60 time of 8.6 seconds is not quick these days. It’s certainly quick enough for most situations but if you want a sports coupe that gives you a real push in the back when you floor the pedal then you need to look elsewhere. Maybe not too far, as the Lexus RC 200t is a non-hybrid turbo-charged model that has all the looks and shaves a full second off that 0-60 time. It also has a conventional auto box which feels much sportier than the CVT box in the RC 300h. You’ll pay for the privilege though by means of larger fuel and road tax bills. Company drivers are much better off with the RC 300h.

Inside is typical Lexus – in other words it is very stylish and extremely well put together. The light grey leather seats on my Premier model look fantastic and as well as being very supportive are also heated and ventilated. Highly polished wooden inserts in the doors add to the feeling of opulence as does the lovely analogue clock mounted centrally in the dash. The infotainment system, however, is terrible to use. It is controlled by a sprung flat touch-plate on the centre console and works by moving a finger gently around and “clicking” when the cursor is over the destination on the main screen – and it will drive you crazy, especially on the move where any bump in the road will have you “clicking” the pad and thus selecting items at random.

It desperately needs a rethink and while the screen is nice and bright I could not for the life of me get the voice directions to work on the sat nav. Intuitive it is not. On the plus side, the Mark Levinson sound system is much easier to navigate around and it sounds superb.

The main instruments are traditional looking with 2 large round dials dominating with an LED readout in between giving economy, drive-train and trip information as well as nav info when needed and the multi-function leather steering wheel is pleasingly chunky. All in all, despite the frustrating tech, it’s a superb cabin that may lack a little storage room – door bins are a little narrow and the glove box is strangely segregated but those in the front will certainly be comfortable on any length of journey.

Not so comfortable in the back though – as you would expect in a coupe. I like the way the front seats slide forward electronically when you fold down the backrest to gain access to the rear. Once in there it felt a little tight – even at my height of 5ft. 8in. Legroom was just about acceptable but the sloping roof line doesn’t give much headroom. The tiny rear windows only add to a claustrophobic feel. Likewise,  the boot is outclassed by rivals being only 340 litres in size although the rear seats do fold flat so for a holidaying couple there should be plenty of space.

Out on the road the Lexus RC 300h is an easy, relaxed drive – there are no adaptive dampers like on the super-quick F-Sport model but that just means the ride is more comfort than sport. Try to push on a bit and the Lexus responds much more like a grand tourer saloon than a sporty coupe – the CVT gearbox is beautifully smooth but not quick to react.

If you want things more urgent then you’ll need to select the “Sport” button from the central console and use the flappy-paddle gear shifters on the steering wheel. To be fair, just selecting sport mode makes a marked difference in response and the RC 300h suddenly feels more like you expected it to feel from the outside. In fact, the Sports Mode should really be the default. Steering is lovely and direct with just about enough feedback for you to know what the front wheels are doing and pot-holes are dealt with very well considering the suspension leans towards the sporty side of damping.

So, an under-performing sports coupe or a stunning-looking cruiser – take your pick. I can forgive the Lexus RC 300h almost anything because of it’s looks alone, but the lack of sporting oomph and that terrible infotainment interface would tempt me to look elsewhere for the perfect sporting coupe.