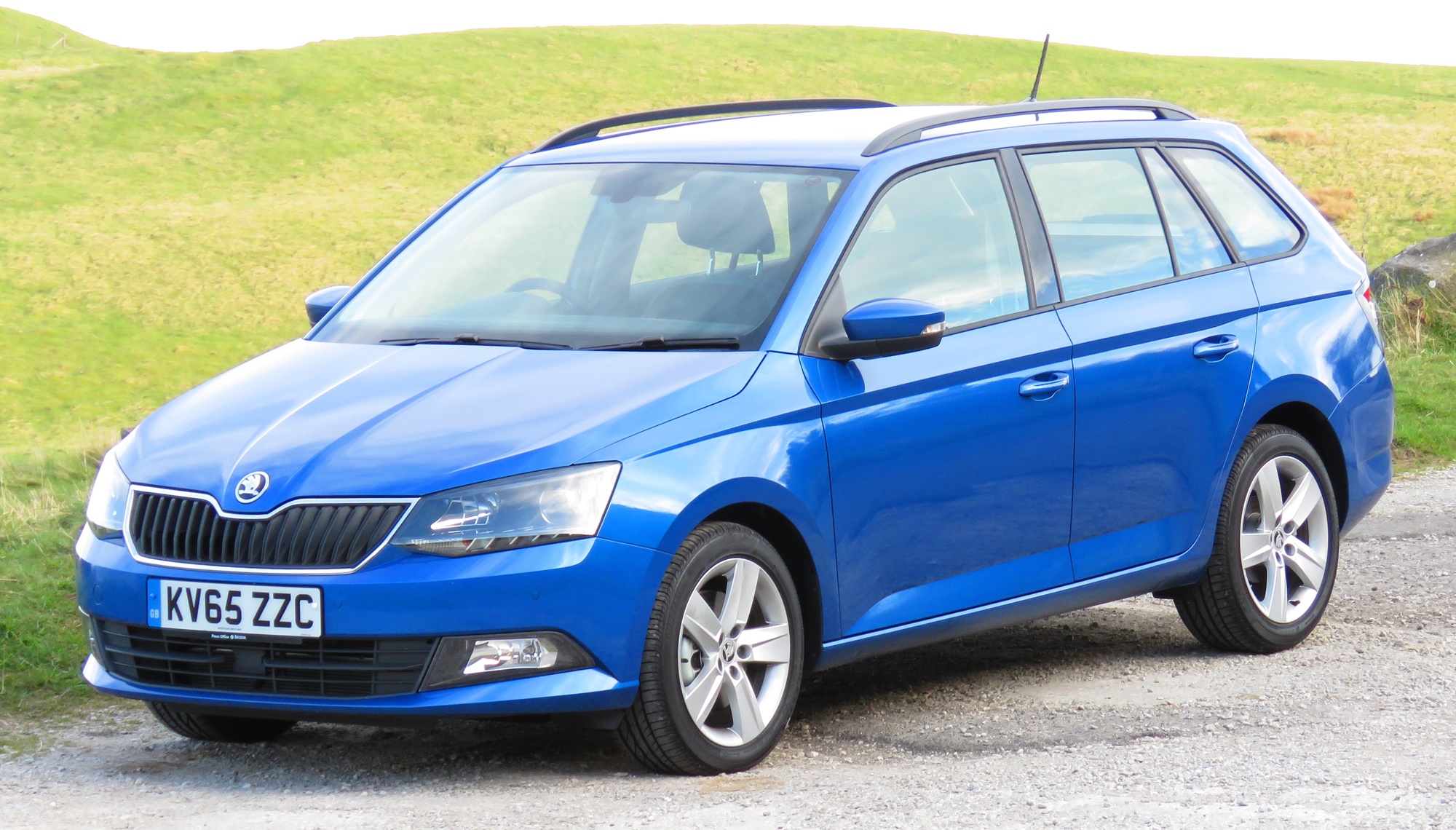 IT seems you can’t go wrong with a Skoda these days. Once the butt of many a joke, they are now more associated with quality at a reasonable price. Sharing technology, platforms and to a large degree the fittings of it’s more upmarket mother group, Volkswagen, has injected a bucket full of Kudos into the company which started life in Czechoslovakia way back in 1895.

A raft of “Car of the Year” awards over recent years has lifted the marque in the eyes of both the motoring industry and the public in general and the little Fabia has been one of the favourites, taking the “What Car?”overall “Car of The Year” award in 2015 and “Best Small Car” in 2016. I’ve been driving the estate version in SE L spec with a 1.4 TDI engine and in the lovely Race Blue metallic paint (£535 option) and I must say I’ve really quite enjoyed it as it must be one of the easiest small cars to drive with it’s light clutch, slick 5-speed manual gearbox and a very willing 1.4 turbo diesel which puts out 105 bhp. You won’t find many rivals in this sector either – maybe just the SEAT Ibiza ST which is quite a chunk of money more expensive.

The Fabia ain’t  bad looking either – for an estate. Sharp lines and the familiar Skoda family front end with that black grill bound in chrome and smart looking LED daylight running lights. The side indicators are now integral to the wing mirrors to give the sides a cleaner look. Yes, it’s all quite an improvement on the older model which was no ugly sister anyway. Inside is light and airy with seats finished in Jeans Blue and a piano-white insert running the length of the dash which also makes an appearance on the steering wheel too. Very smart.

Switchgear is all up to muster with nothing feeling flimsy and the plastics, while not premium are up to the job and don’t detract from the overall feel of the cabin. You get quite a lot of standard kit with the SE L model, including rear parking sensors, Bluetooth, climate control, cruise control, keyless engine start/stop, 6-speaker Arkamys sound system, 16in alloy wheels and – on the estate – black roof rails. My car also came with the Amundsen touchscreen Sat Nav (£500), heated front seats (£180) and a Bike Carrier (£180). The 2-bike carrier is worthy of a mention as it is quite unusual in that you carry the bikes onboard not outboard, meaning that there is no danger of the bikes falling off your car and they are totally secure both on the move or when parked up. The aerodynamics of the car are also unaffected so making this a greener way to carry bikes.

The catch is, of course, that the rear seats need to be folded flat so if you’re thinking you could get two bikes in the boot and the kid’s bikes on the rear/roof then forget it. You can transport their bikes but the kids will have to stay at home. No, this is strictly aimed at the sporty young couple who want to throw their bikes into the back of the car with the minimum of fuss and head out onto the trails.

Non-biking rear passengers will find plenty of leg and headroom but if you want a centre headrest you will have to pay an extra £50 which seems a little mean. On the road the Fabia is a breeze (Fabreze?) to drive with impeccable manners no matter what the surface. The diesel is a little noisy on tick-over but not a problem once on the move and it feels a little quicker than it’s official 10.2 seconds dash to 60mph.

The Fabia handles just like you would expect a small hatchback to handle – nimble and lively. You don’t really feel that you are driving an estate car – after all it is only around 30cm longer than it’s hatchback sibling but that extra 30cm adds up to an impressive load space of 505 litres with the seats up and a whopping  1,395 litres with the seats folded – 245 litres more than the hatchback.

Whether you go for the 1.2 petrol or 1.4 diesel version will depend on your mileage but I would avoid the base 1.0 petrol as it feels underpowered. Of the two diesel engines the 105bhp version wins over the 90bhp as it is just as economical but feels more up to the job and is not much more expensive. There is a DSG version available too but only comes with the lower-powered diesel engine so is best avoided unless an auto box is essential for you.

So, if you are after a small car which can carry a large load and you don’t want to feel like you are driving a barge, then the Skoda Fabia Estate – especially in it’s TDI guise – will probably fit the bill.