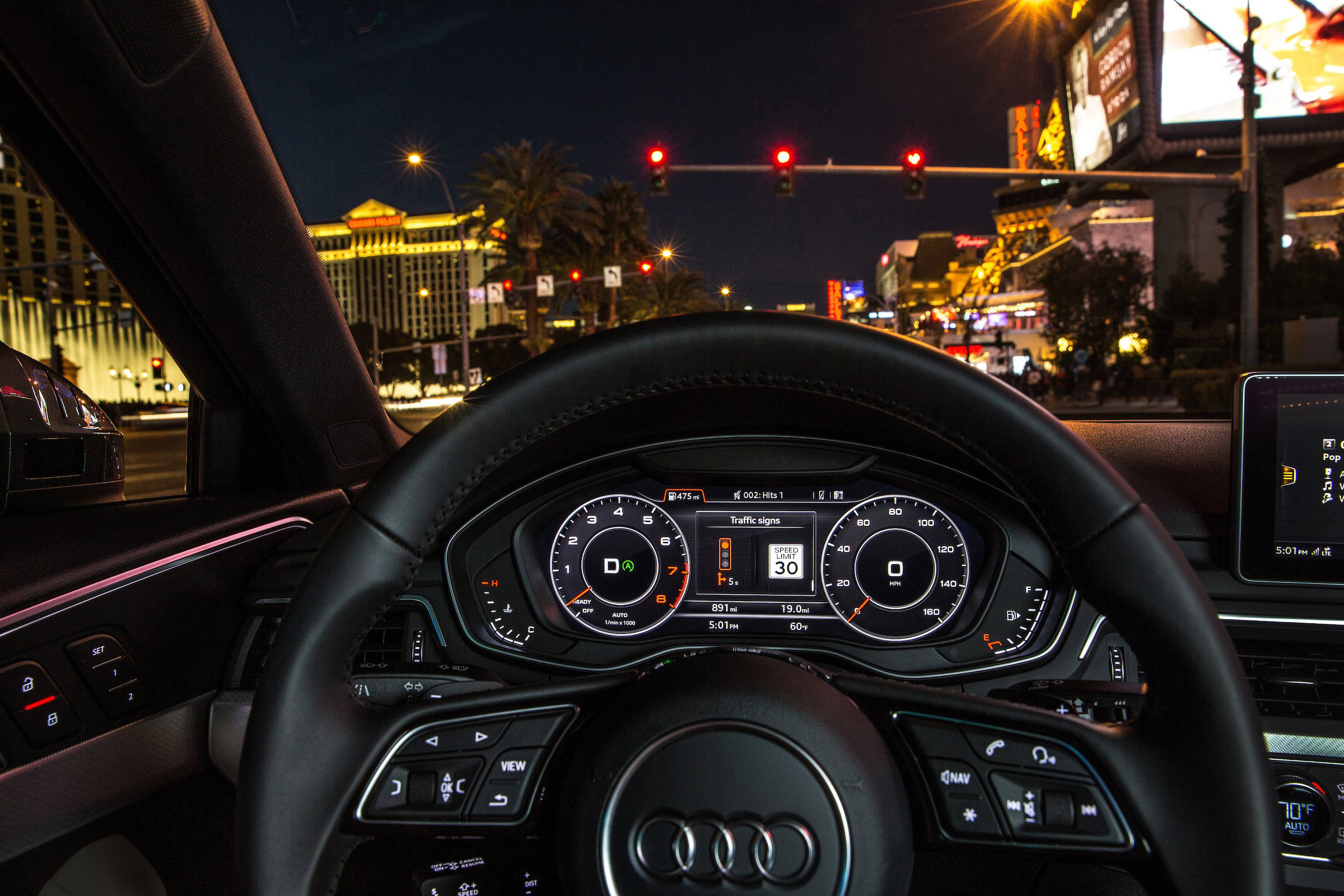 Ingolstadt/Las Vegas, 7 December 2016 – If you know in advance when a traffic light will switch from red to green, your driving is more relaxed and efficient. Audi is the first car manufacturer to connect the car to the city infrastructure – an important step towards autonomous driving. In Las Vegas Audi A4 and Q7 models are now able to display traffic-light phases directly in the car. Further U.S. cities will follow, and introduction of the system is planned in Europe. Traffic Light Information optimises traffic flow, saves valuable time and reduces environmental impact.

Audi of America is cooperating with several cities in North America to upgrade the infrastructure for Vehicle-to-Infrastructure (V2I) technology. “For the first time, our cars are exchanging data with traffic infrastructure in real time. Drivers can adapt their behaviour to the situation and move through city traffic in a much more relaxed and controlled way,” says Andreas Reich, head of Electronics Pre-Development at AUDI AG. “We increase energy efficiency when we connect our Audi models to smart cities. Further V2I services will follow, making the car into an interactive mobile device. We see autonomous driving as the end of this development.”

As a first step, all Audi A4 and Q7 models produced for the U.S. market since June 2016 and equipped with Audi connect have this function on board. In the USA, municipal traffic management centres will communicate the traffic-light data to Audi’s project partner Traffic Technology Services TTS. Here the data are prepared and sent to the on-board computer in the Audi via a fast Internet connection, for example 4G/LTE, in real time.

Fuel savings of up to 15 per cent

The first function of the Traffic Light Information V2I component is called Time-to-Green. In the Audi virtual cockpit or head-up display, drivers see whether they will reach the next light on green while travelling within the permitted speed limit. If not, a countdown is provided of the time remaining until the next green phase – and drivers can throttle back in good time.

Pilot projects in Europe have shown that drivers exercise more foresight thanks to this information about traffic lights. This has a beneficial overall effect on traffic flow. “In our tests the number of cars that had to brake to a standstill in traffic fell by around 20 percent. This saved time for the driver and also made fuel savings of about 15 percent in the pilot project,” says Michael Zweck, project manager for Audi Traffic Light Information.

First of all, Audi customers will use this service. The development work that Audi is investing in traffic-light systems will also benefit customers of other brands in future. The increasing spread of the technology will help city traffic planners to understand the causes of hold-ups and optimise the phasing of traffic lights.

In future Traffic Light Information could be linked up to smart navigation and used for new powering concepts. For example, “green waves” in traffic-light sequences could be incorporated in route planning. It is also conceivable that Audi e-tron models could make greater use of braking energy by charging the battery as they decelerate at a red light.

Audi also intends to introduce the technology in Europe. In Berlin, Ingolstadt, Garmisch-Partenkirchen and Verona there have already been extensive pilot projects. In Berlin alone, some 700 traffic lights in the inner city have been connected to the service.

Across Europe, however, unified data standards and digital infrastructure do not exist: “In Europe highly diverse traffic technology is in use, as the infrastructure has developed locally. We are working on harmonisation of the data that have been prepared. After that has been done, we can provide Traffic Light Information in Europe too,” Michael Zweck announced.